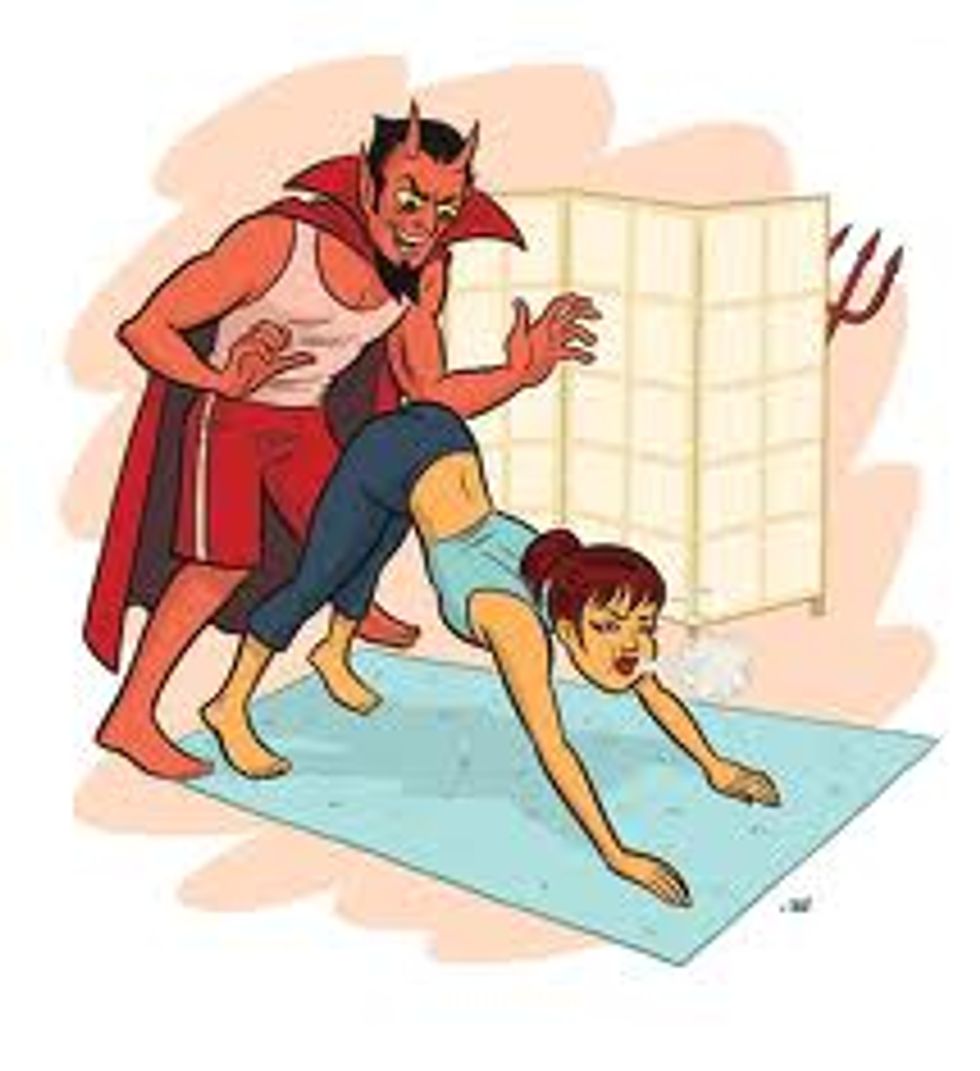 After a stressful day of working (or hanging out in aworkplace man cave), many Americans unwittingly risk handing their immortal souls over to Beelzebub through smoking weedpremarital sexwitchcraft yoga.  Satan is apparently incarnated in that cute yoga instructor, tempting you to deny the One True God for that sweet sweet release found in the Revolved Half Moon Pose.

Or so said real-life not-a-joke GOP nominee for Lieutenant Governor Bishop Ewwwwwww Jackson back in 2008:

When one hears the word meditation, it conjures an image of Maharishi Yoga talking about finding a mantra and striving for nirvana. . . . The purpose of such meditation is to empty oneself. . . . [Satan] is happy to invade the empty vacuum of your soul and possess it. That is why people serve Satan without ever knowing it or deciding to, but no one can be a child of God without making a decision to surrender to him. Beware of systems of spirituality which tell you to empty yourself. You will end up filled with something you probably do not want.

Thank the gods we have the good Bishop here to warn us about all this with his not-at-all sexually innuendo-filled words. Could this be secret performance art? That “invade the empty vacuum” and  "filled with something you probably didn’t want” sounds like Rick Santorum on a Castro District bender. (Speaking of Santorum, don’t forget about this!) But apparently there is some crazy underground conservative nutjob Christianist movement that is for reals worried that yoga is of the debbil. Explore further for the good of your SOUL!

Let’s start with the Vatican, which is always a good place to start for reasoned discussions about all things related to demonic-ness:

(We checked. This is not from The Onion). Now before you immediately dismiss this guy, remember that he is the CHIEF exorcist, not some low-level junior exorcist. He worked his way up exorcising minor demons like Bilbo Baggins and Tinkie Winkie in order to EARN the title of chief exorcist. Hours, perhaps days, of research went into proving that the Lotus Poses were just as bad evil as reading that book about Muggles and wizards with that girl who was cute, and then grew up to be totally hot and now it’s not gross to say that because she is old enough, right?  Because for realz, she is smokin.

Even megachurch pastors are gettin' in on the action:

"Should Christians stay away from yoga because of its demonic roots?" asked megachurch pastor Mark Driscoll of Mars Hill Church in Washington state. "Totally. Yoga is demonic. If you just sign up for a little yoga class, you're signing up for a little demon class."

As we all know, little demon class is just a stepping stone to big demon class, and then on to demon university to graduate with a degree in demonology, certifying you to teach yoga class, because LOGIC!

Seriously, Virginia's next Lieutenant Governor might believe that yoga has its roots in a red tights-wearing boogyman with a forked trident, seeking to “fill the empty vacuum.”  Then again, we all should have seen this coming, because those are clearly not tights, just red yoga pants. More likely, the only empty vacuum here is the one behind Bishop Ewwwww’s blank stare. Fuck that guy, except please keep talking because you make this job soooooo much easier.