GOP Excited Gov. Nikki Haley Is Such Brown, So Lady 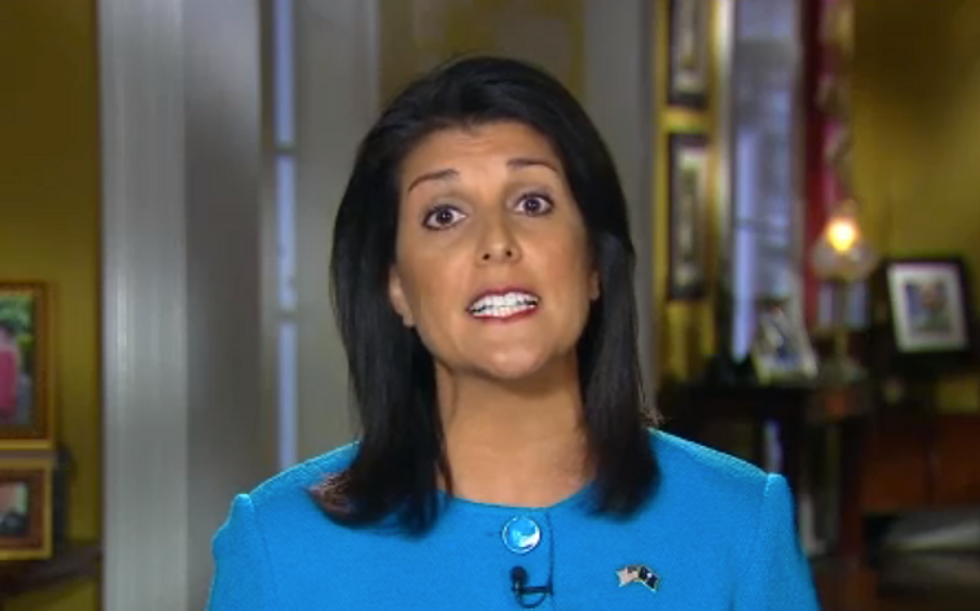 [contextly_sidebar id="0eLm40JEi1dhemESPyZLsW5Yx1A0kum6"]Good news for South Carolina Gov. Nikki Haley! On Tuesday, she managed to deliver the most successful Republican response to a State of the Union address in recent memory. She hit all the right notes: Obama sucks; yay America; that time Confederate heritage-not-hate fanboy racist shit-sack Dylann Roof murdered nine African-Americans in their own church sure was sad, huh, wasn't it? And she did it all without choking on her own breath, scoffing at volcano "science" literally seconds before God brewed up a big fat volcano for her state, or telling a super freakin' weird WTF?!? story about wearing bread bags on her feet.

Most importantly, however, she played the role of Not A White Dudejuuuuuust right:

Clap clap and brava, says the head of the Republican National Committee whose head is an exact replica of a fuzzy penis. You done did real good, Nikki Haley, at showing America that not every single Republican is a cranky old white guy, even though they mostly are. At this crucial time when Republicans are working hard to guarantee that no Hispanic -- except for Mexican Iowa Rep. Steve King, of course -- ever votes Republican again, and the entire field of presidential candidates has sworn to shred the Constitution, deport all the browns, and hang a big White Christians Only sign on the Statue of Liberty, it's important to show off those few Republican leaders (what're they up to now, like, five? six at best?) for "diversity."

[contextly_sidebar id="H6PsPRbRUrwMEYpqMWWtuNKe8bBLkCFL"]It would be unfair to suggest that Ann Coulter speaks for the Republican Party as a whole, since nobody cares about her anymore, which is why she is so very sad and increasingly desperate for attention. But that's not to say the majority of Republicans don't agree with her. The GOP base loves Donald Trump and his plans to exile and deport anyone who is suspiciously not white. Like the black guy who dared to attend a Trump rally and was beaten up and told "go home, nigger," with the feverish crowd of Trump loyalists chanting "All lives matter" as he was escorted out of the event. Or the Muslim woman who was ejected from a Trump rally last week, for looking all Muslim, while Trump gleefully declared, "There is hatred against us that is unbelievable. It’s their hatred, it’s not our hatred." OK, sure.

[contextly_sidebar id="SsBjy8oe5UxnIT42OcBXwxdoXCilPE0t"]And as for monitoring all the Muslims and their mosques and sending Latino immigrants, even the ones who are here legally, south of the wall Mexico's totally going to build for us, until Trump can decide who the good ones are and whether to let them return? Yeah. Republicans love that. Priebus might be real proud of the GOP diversity on display Tuesday night, but the reg'lar mouth-breathers, like Ann Coulter? Not so much. Especially not when Haley rubbed her daughter-of-Indian-immigrants-ness in everybody’s faces. And ​then she dared to subtweet Dear Would-Be Leader Trump and his xenophobic fans (and later confirmed, for morons who don't know how to read between lines, that yes, she ​was talking about Trump):

Today, we live in a time of threats like few others in recent memory. During anxious times, it can be tempting to follow the siren call of the angriest voices. We must resist that temptation.

No one who is willing to work hard, abide by our laws, and love our traditions should ever feel unwelcome in this country.

That kind of inclusive politically correct RINO hippie talk was, to true conservatives, practically worse than Obama's address. Or as John Nolte, editor-at-large at Dead Breitbart's Coke-Fueled Series of Tubes For the Criminally Stupid, tweeted:

Good one, John. We should probably demand to see Haley's long-form voter registration. True, she was an enthusiastic two thumbs up for the Confederate treason flag until she was shamed into calling for its removal from the state house grounds by the entire nation and those liberal do-gooders at Walmart. Sure, she favors arming lady-beaters because God Bless the Second Amendment, y'all, and the best way to combat domestic violence is to tell those victims to get their black-and-blue asses to church. And yes, Haley wishes those black folk would stop complaining about getting all kinds of killed by police all the time.

But with Tuesday's speech, full of reverse-racist micro-aggressions and invitations for any old brown-skinned immigrants to come on in, she was practically worse than Obama, and now all the conservatives have to hate her.

But back to some good news for Haley: Trump probably isn't going to be president, so no need to start packing her bags for the Make America White Again deportation just yet.