GOP Reps Will Get That DEEP STATE, Or LIE TRYING!

This time it's gonna work! This time the GOP will shout GOTCHA while dumping House testimony from another FBI witness, and we'll all realize that the Deep State was in the tank for Hillary this whole time. Then the Grand Marshall of the Supreme Court will do LOCK HER UPS to Secretary Clinton, and it will prove there was NO COLLUSION because Donald Trump is pure as the driven snow.

Just kidding! On Tuesday, Ranking Member Doug Collins released the second half of Lisa Page's testimony in July before the House Judiciary Committee. And just like last week when he yelled HEE HAW HAM AND BISCUITS and released Bruce Ohr's transcript, he has once again succeeded in proving ... that the FBI worked very hard to protect the country from foreign threats. You're doin' great, sweetie!

Yes, those are all idiotic. But the Dumbass Prize of the day goes to congressional fuckweasel John Ratcliffe of Texas, who is just wondering WHY DIDN'T THE FBI DO PERJURY TRAPS TO HILLARY CLINTON ABOUT THE TARMAC MEETING WHEN THEY INTERVIEWED HER ABOUT HER EMAIL SERVER?

To which Lisa Page responded:

But John Ratcliffe went to law school, so he was ready for Page's wily ways. Wasn't the FBI obligated to give Hillary Clinton one last chance to get LOCK HER UPPED by asking her about an unrelated meeting she didn't attend, HENNNNGHHHH?

RATCLIFFE: If the stated premise that everyone seems to have given is that she's not going to be charged unless she lies in her interview, she can't lie if she isn't asked the questions.

How have we managed to miss a great legal mind like Ratcliffe lurking in our midst all these years? The man literally said, "Your inability to answer tells me a lot. And what it tells me is inconsistent." And if you can figure out what the hell that means, you need to lay off the paint chips. But more on that asshole later!


North Carolina Congressman Mark Meadows earned his spot as Runner Up Dumbass by consistently referring to Ms. Page as "Lisa." Which is better than "honey" or "sweetheart," but not a lot better. (Mark Meadows knows a Vagina American, and she say's he's not sexist at all. Mark Meadows will have you know he has nieces with vaginas!)

For his troubles, Meadows was only able to establish that the Justice Department put the kibosh on prosecuting Clinton for "gross negligence" because they deemed the law itself to be void for vagueness. If we were lawsplaining it to someone like Congressman Ratcliffe, we'd say that means, "Law bad! Law like cloud, everyone see something different. Constitution say no fair have law like cloud. Bye bye, law!" But the DOJ was dealing with smart people like Lisa Page, so they just said they didn't think they could successfully prosecute due to vagueness.

Oh, hey, guess who's lying out his scrawny ass about this?

And guess who picked right up with that bald-faced lie.

Yeah, that's the bullshit they're going with from this hearing. That Lisa Page proved the DEEP STATE DOJ was in the tank for Hillary. Lyin' bastards.

Here's some stuff Lisa Page actually did say. She told the committee that the prospect of Russian interference in the American election was scary as hell, and a lot more important than figuring out whether a classified email inadvertently wound up on Secretary Clinton's server back in 2013.

What we were dealing with at the outset was -- this is now, you know, October. This is a month before the election. And I can't speak to whether we were any closer to determining whether there was, in fact, collusion, because I'm precluded from doing so right now. But we are still looking very seriously at whether our most threatening, most hostile foreign power was engaged in -- was working with an American political candidate or members of that candidate's team to affect the outcome of an American election.

It is an unheard-of investigation, in the first place, in the counterintelligence realm. Russians engage in all manner of nefarious activity, but this was a new height in terms of brazenness -- if true -- in terms of brazenness.
And with respect to how threatening that would be -- again, if it were true -- the notion that there might be more emails that have not previously been seen that existed on Hillary Clinton's email server just simply don't even enter into the realm of the same room of seriousness.

The Clinton investigation involved activities that had taken place three years prior. It's an entirely historical investigation. Even if -- even if there had been dispositive evidence which revealed -- I don't know what -- even there, which would be a very serious allegation in my assessment, and I think in the assessment of the Counterintelligence Division, they still don't even come close to the threat posed if Russia had co-opted a member of a political campaign.

She established that absolutely none of the Steele Dossier was disproven, and the FBI analysts tried really hard to do it.

[A]s soon as we received the reporting from Steele in mid-September, we set about trying to prove or disprove every single factual statement in the dossier. And so, and we had line level analysts, who are super experts on Russia, trying to pick apart each statement and either try to prove its veracity or prove its inaccuracy. And to the best of my knowledge, we were never able to disprove any statement in it. So we were never able to say: There's a claim about X, and that is untrue.

And also, she demonstrated that Mark Meadows's theory of some FBI dude starting the whole BUT HER EMAILS investigation because he realized there were "anomalies that would suggest that there was one copy of every email going to a third party" is horseshit. The presence of classified documents on her private server was the triggering event, and there never was any evidence that a foreign government accessed them.

[N]othwithstanding whatever the IC IG [Intelligence Community Inspector General] may or may not have conveyed, I know we looked extensively at this question, because that was a serious question. And to the extent that a foreign government or even a criminal outlet had had access to Secretary Cinton's private email server, that would have been something we cared very much about. And it's my understanding that there was no evidence that would have supported that kind of conclusion.

Ms. Page then pointed out that Robert Mueller had just indicted dozens of GRU hackers by name, so they probably could have worked out if that server had been penetrated back in 2013. At which point even Mark had to STFU and yield back his time.

And one more thing! This guy Ratcliffe is a NASTY CREEP. 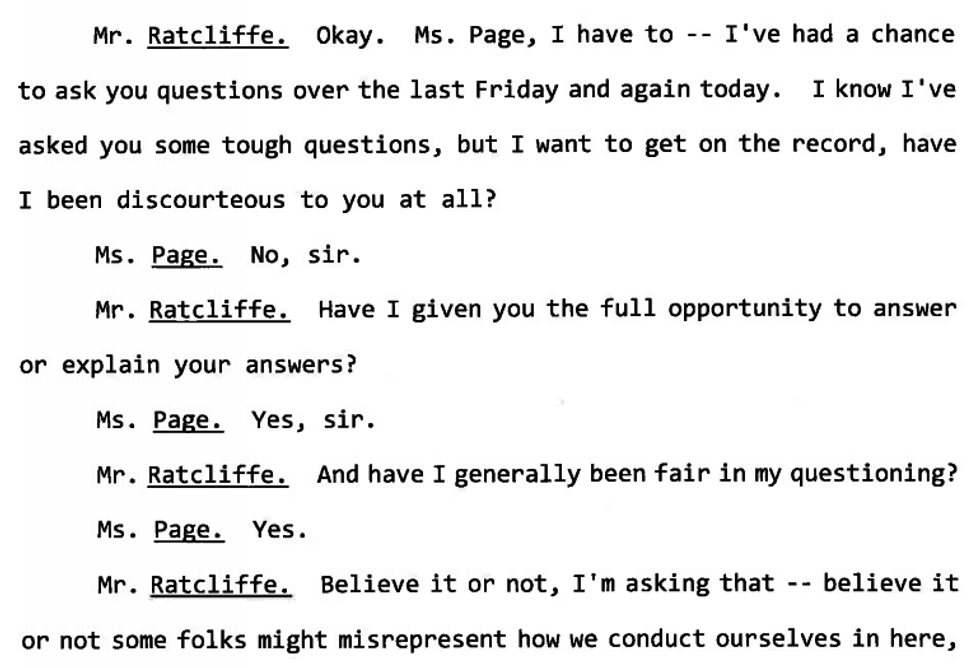 While I have my foot on your neck, little lady, just say into the microphone what a gentle, fair, honest man I am. Because I'm going to go out and tell the most egregious lies, and I want to have you vouching for me on the record.


Please click here to fund your Wonkette, who is MAD AS HELL!

Pompeo Attempts To Stick Up Reporter, Winds Up Shooting Himself In The D*ck

And Then The Saints Came Marching In