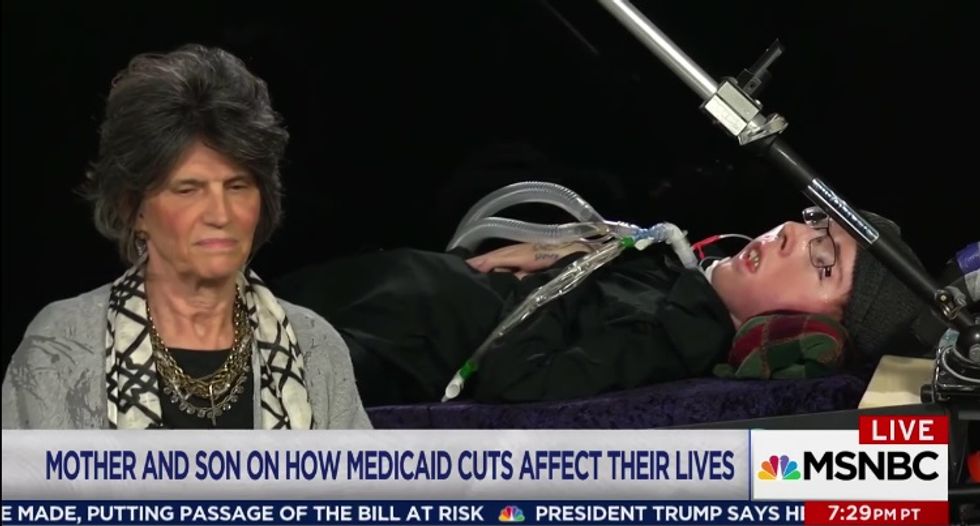 His voice synthesizer has a British accent. If only his healthcare did...

If you didn't watch MSNBC's "The Last Word" Friday, you missed an amazing interview with a family that's certain to be affected, badly, by the Republican plan to cut nearly a trillion dollars from Medicaid over the next decade so rich people can get a nice tax cut. Guest host Ari Melber spoke to Mike Phillips and his mom, Karen Clay. Mike was born with a neuromuscular disorder, spinal muscular atrophy, which has degraded his muscles so badly that he needs a ventilator to breathe, and a computer interface to communicate. He was featured a few years back in a segment of the TV version of "This American Life," about how a young adult -- dependent on his mom's full-time caregiving -- navigated late-adolescent rebellion and, at least emotionally, breaking away from mom, becoming a tattooed gothy guy, and having a girlfriend:

Thanks to Medicaid, Mike is able to live at home, with his mom still as his primary caregiver, plus some part-time aides. He blogs, and he sends out wonderfully snotty messages to GOP senators on Twitter.

Friday, Mike Phillips and Karen Clay discussed how the proposed cuts to Medicaid, which will change funding to a block grant for states, capped by population and steadily reduced over time, will likely mean Phillips won't be able to stay at home, and may end up institutionalized, with far less control over his life. Because MSNBC's embed code doesn't play well with WordPress (use HTTPS embedding, damn you!), we can't embed the whole interview, which you should go watch. Here's a snippet from their Twitter with Mike's statement, read by his computer's voice synthesizer:

.@wholeexpanse, who has spinal muscular atrophy and depends on Medicaid for his care, shares his fears about what cuts could mean for him: pic.twitter.com/UjX5Lb7t5z

“Hi and good evening. First, I just want to say it’s an honor to be here. I watch your legal analysis every day. You’re spectacular. So ever since November the 9th, 2016, I haven’t been sleeping well. I’ve been scared. I’ve never been scared by the results of an election. It’s an odd feeling. I’ve always felt like the federal government exists to protect citizens, even when state governments won’t do so. Maybe especially when state governments won’t do so.

So, yes, I’m scared. Scared of what could happen to me if Medicaid cut comes to pass in Florida and scared because Florida is bent on doing so because they know the federal government won’t stop them. Though I’m quite disabled, Medicaid services allow me to live a full, productive life, interacting with the community, being cared for at home. I live at home. I have a personal care assistant. She takes me anywhere I want to go — the movies, Starbucks, dinner with friends, the tattoo shop, when the mood takes me, which is often enough.

I don’t have a girlfriend right now, but I had one for quite a while, and I’d like to give things another go. I’m a published writer. I helped develop assistive technology. I’m not exactly Ryan Gosling, but I lead a good life. Losing Medicaid, being forced into an institution, I’d lose everything. I’d lose the rights guaranteed to me under the Constitution — life, liberty, and the pursuit of happiness. People with disabilities know happiness isn’t guaranteed, but we want a shot at it just like anybody else.”

We were fine until the interview cut back to Ari Melber, who had to choke back tears to say "Mike, thank you for sharing that. It’s very eloquent." Then we lost it.

It's good to have a dream. Unless it's an evil dream. Then that's just evil.

Karen Clay is, understandably, furious at the Senate: "This bill is not just mean. This bill is cruel," she said, and predicted that the cuts aren't merely going to be cruel; they're going to lead to loss of life. In the follow-up panel discussion, Nation correspondent Joan Walsh reminded us that this -- the dismantling of Medicaid -- is what Paul Ryan dreamed of at fraternity keggers. "What kind of monster is he? Who dreams of cutting Medicaid?" And for that matter, she asked, "What the hell kind of country are we?"

We are the kind of country where a powerful portion of the political power structure is just fine with this. That may mean we truly are a country of monsters.

Here's a YouTube copy of the full segment, which we suspect will be copyright-claimed into oblivion pretty soon:

The federal Medicaid program doesn't require states to provide the extra services that help people with severe disabilities live more independently, and if the cruel joke called "Better Care" passes, those will almost certainly be the first cuts to be made. Institutional care costs more, which Medicaid typically at least partially covers. The cost of institutionalization often bleeds families dry, so they also must rely on a patchwork of charity and funding from other government programs.

You can already see hundreds of lawsuits coming under the Americans With Disability Act, huh?

Fortunately, families making over $250,000 a year will get a nice big tax cut. So if you're rich and have a family member with severe disabilities, you'll be in gravy! Even better if you're rich and everyone in your family is healthy, for now.

While we watched this segment we briefly thought, "Jesus. The Democrats need to have Mike Phillips testify against this bill..." At which point we remembered how silly that thought was. Mitch McConnell isn't allowing any hearings on this bill.

Gosh, we wonder why?

Yr Wonkette is supported by reader donations. Please click the "Donate" clicky. And for the love of everything decent, please call your senators.