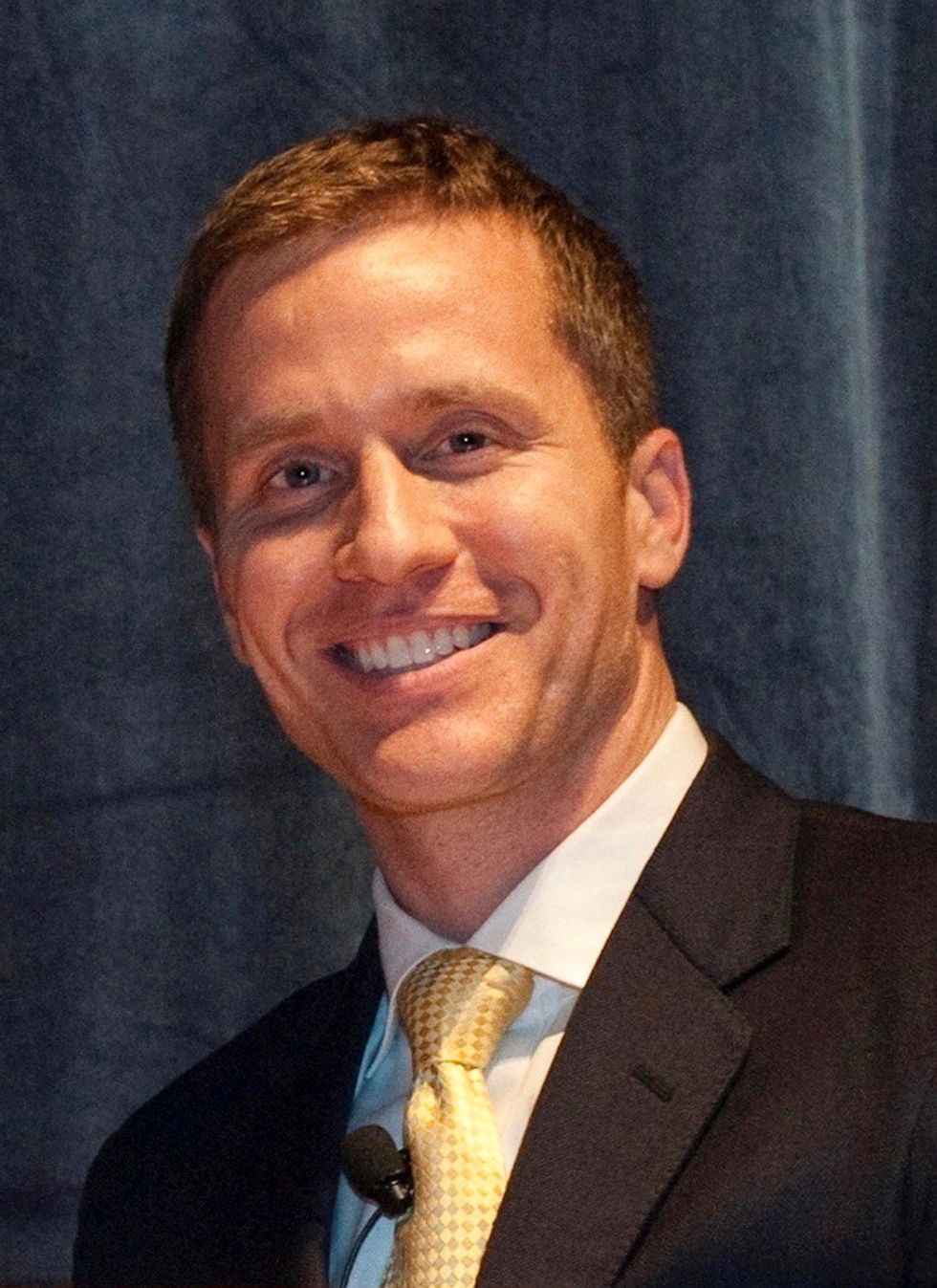 In 2015, Missouri Governor Eric Greitens transformed himself from a Democrat into a Republican, explaining in a July 2015 Fox News column the myriad and bullshit reasons he made the switch.

A few months earlier, in March, Greitens, who is married to a lady named Sheena, had begged and pleaded for the lady who cut his hair, who was also married, to come to his house so he could extramaritally sex her. Don't know if he had officially turned Republican in his heart at that point, but MAYBE. She said OK fine -- you know, because he didn't want to be seen in public with a woman what was not his wife -- and when she got there, Greitens took her down to the basement and got her naked and tied her up to some exercise equipment and then took her picture, so he could blackmail her.

Yeah, that seems to be what happened. The woman's now ex-husband (they divorced in 2016) is coming forward now, explaining that he knew this story was going to come out, because law enforcement had come a-calling, and he wanted to get in front of it. The major allegations come from a conversation he had with his now ex-wife, that she didn't know was being recorded. (Missouri is a one-party consent state, so that is kosher.) The conversation they had was ... pretty wow:

Woman: So, on Saturday morning, before my first client, I did go to his house.

Ex-Husband: For the first time?

Woman: For the first time. Ever. Like I said, nothing, period, had ever happened or taken place until this snowball. This (expletive) tornado just happened. I know I brought this on."

Once at Greitens's house, with his wife and children nowhere to be found, this allegedly happened:

Woman: "He said: "I'll make you feel better. I'll make you feel good. Come downstairs. I want to show you how to do a proper pull-up. And I knew he was being sexual and I still let him. And he used some sort of tape, I don't what it was, and taped my hands to these rings and then put a blindfold on me.”

And that was when she saw the trademark flash of a camera, followed by the man who would become governor saying, "you're never going to mention my name, otherwise there will be pictures of me everywhere."

Do we still say HE SEEMS NICE now that the #MeToo movement is in full swing, or is that joke played out? Or should we just go with WHAT A GROSS MOTHERFUCKER?

Greitens admits that yes, he did sex a lady what was not his wife, and that he and his wife have worked out that very sad part of their marriage and everything is OK now, the end. He does not admit to tying her up or blackmailing her. From his lawyer:

"The governor has now seen the TV report that ran tonight. The station declined to provide the tape or transcript in advance of running their story, which contained multiple false allegations. The claim that this nearly three-year old story has generated or should generate law enforcement interest is completely false. There was no blackmail and that claim is false. This personal matter has been addressed by the Governor and Mrs. Greitens privately years ago when it happened. The outrageous claims of improper conduct regarding these almost three-year-ago events are false."

In a separate statement provided to KMOV Channel 4 in St. Louis, the family asks for thoughts 'n' prayers and also too Eric Greitens has gotten forgiveness from his Jesus and from his wife so everybody else please forgive him now.