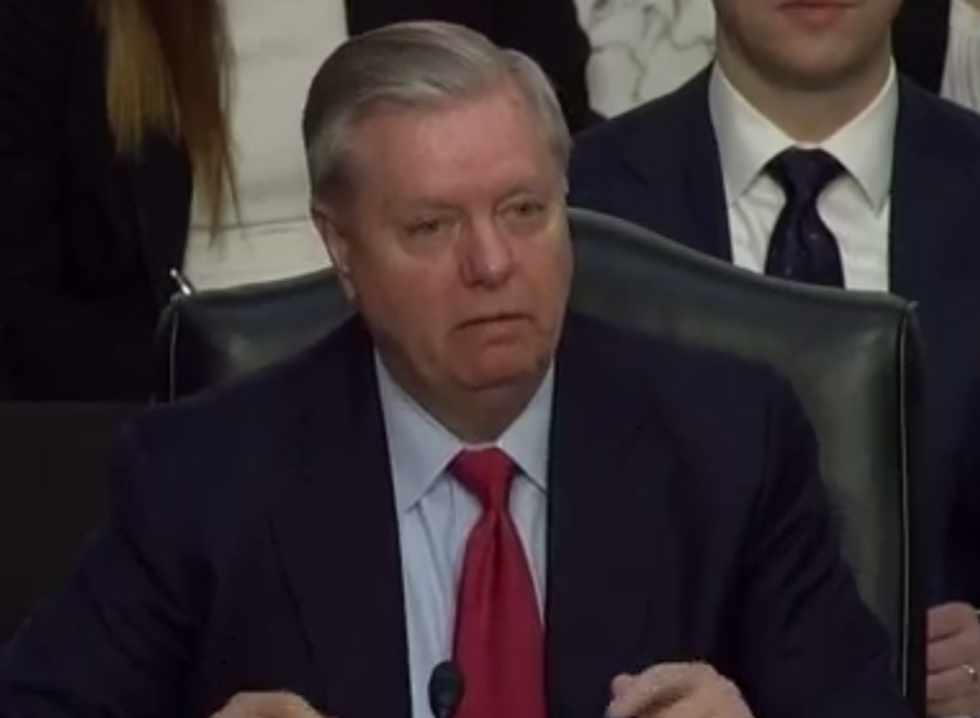 Graham's GOT IT FIGURED.

There was a fascinating hearing Thursday in the Senate Judiciary Committee that you might have missed if you were distracted by Skinny Repeal and Anthony Scaramucci's love for the president. The committee hosted Bill Browder, head of Hermitage Capital Management, who used to be the biggest foreign investor in Russia, and who has been an outspoken whistleblower in support of the Magnitsky Act, which we've learned ALL ABOUT the past few weeks. It's the law passed to punish Russian human rights abusers who murdered Browder's lawyer Sergei Magnitsky in a Russian prison, for the crime of exposing MASSIVE fraud and corruption perpetrated by Vladimir Putin and his band of merry oligarchs. In fact, part of the fraud Magnitsky and Browder uncovered was a scheme where Russia officials stole Browder's company and gave THEMSELVES refunds out of the taxes Browder's company had paid to the Russian government. (There's way more to it than that, but nutshell.) Putin even got some of it! Screw you, Browder! Screw you, ACTUAL Russian government. HOORAY, PUTIN AND HIS FRIENDS!

Before Magnitsky died of  murder in jail, the Russians tried to coerce him into signing a false confession saying HE and BILL BROWDER stoled those millions of Russian tax money rubles.

In response to the Magnitsky Act, Putin banned Americans from adopting BOUNCY RUSSIAN BABIES. If you'll remember, that's what Donald Trump Jr. and Jared Kushner and Paul Manafort discussed with Russian anti-Magnitsky crusader lawyer Natalia Veselnitskaya at Trump Tower on June 9, 2016. It's also allegedly what Donald Trump chit-chatted with Putin about on the sidelines of the G20, during the sexxxy after-dinner meeting they didn't tell the press about.

Browder told senators that repeal of the Magnitsky Act is Putin's "single most important foreign policy priority," and that it's personal for him, because many of the oligarchs sanctioned under the act are LITERALLY HOLDING PUTIN'S MONEY. The act has made all these Russians financial pariahs, because on top of how they're not allowed to do business with American banks, people on the Treasury Department's OFAC list of sanctioned individuals tend to be shunned worldwide financially. Bad news for multi-gabillionaires who make their money from crime and fraud and money laundering!

Browder testified to all of this and more in Thursday's Senate hearing. And during his testimony, Republican senators like known dumbfucks Chuck Grassley and Lindsey Graham used Browder to advance the GOP's new counter-narrative about the REAL STORY of conspiracies between Trump and Russia, which is that the story itself is a Russian hoax. BET YOU DIDN'T SEE THAT COMING! (Except how Rachel Maddow started forecasting this weeks ago.)

So, here is the bouncing ball you need to be able to follow to understand what these Republicans are doing, and why it's bullshit. Let's bullet point it:

Now, let's watch some hearing! Chuck Grassley teed up the GOP's bullshit counter-narrative, which is meant to confuse you. (Video is of the entire hearing, but Grassley is at the very beginning.)

Grassley stated that Prevezon "hired Fusion GPS, which then created dossiers [The secret word of the day is "DOSSIER"!] to smear the whistleblowers involved." The insinuation here is that if Fusion GPS made dossiers for this Russian company, then ALL ITS DOSSIERS ARE BOUGHT AND PAID FOR BY THE RUSSIANS, even ones for non-Russian clients! Therefore, that must mean the Trump Pee Hooker Russian Conspiracy Steele Dossier is a Russian hoax!

(ASIDE: Grassley also brought up another Russian company Bill Clinton did a speech for, because it's important to say "Clinton" occasionally, to make things about the Clintons. By the way, did you hear the HOUSE Judiciary Committee wants the Justice Department to appoint a DIFFERENT ROBERT MUELLER, to do investigations into Hillary? When, oh when, will the American Psychological Association classify Clinton Derangement Syndrome as an actual mental illness?)

Anyway, as we said, Grassley just teed it up at the beginning. It was Lindsey Graham who took the idiot ball and ran with it.

Gonna throw a gigantic transcript right at your face. We will of course editorial comment throughout, because we can't help ourselves:

GRAHAM: You believe that Fusion GPS should have registered under FARA [Foreign Agents Registration Act] because they were acting on behalf of the Russians ... So I just want to absorb that for a moment. [ABSORB IT, LINDSEY.] The group that did the dossier on President Trump hired this British spy, wound up getting it to the FBI [VIA YOUR PAL JOHN MCCAIN, WHO OBVIOUSLY THOUGHT IT WAS IMPORTANT]. You believe they were working for the Russians.

BROWDER: In the spring and summer of 2016, they were receiving money indirectly from a senior Russian government official.

GRAHAM: OK. So these are the people that were trying to undermine Donald Trump, by showing he had nefarious ties to Russia. Is that what you're saying? [We are pretty sure Chuck Grassley burped out "yup" off camera right then, but not 100%.]

BROWDER: What I'm saying with 100% certainty is that they were working to undermine the Magnitsky Act, and the timing of that ... [In other words, no that is not what he was saying, LINDSEY.]

GRAHAM: The Fusion GPS products, apparently is they hired a guy to look into Trump, right?

GRAHAM: And the guy looking into Trump was trying to tell the world that Turmp's compromised by the Russians [...]

Why's this important? The Russians are behind Fusion GPS, who are going after Trump!

[Still not what dude said.]

GRAHAM: So here's the deal in June of last year. [At this point, Graham is grinning like he found a shiny gold coin in his stool.] Allegedly, [Natalia Veselnitskaya] is meeting with Don Jr., and the premise of the meeting was the Russian government's behind Trump, and you need to meet with these people, they can help your campaign. And Don Trump says, "I love it!" And they met with this lady.

[And now Browder has a look on his face like "where on earth are we going with this ..."]

So SHE'S workin' for the Russians, and she's trying to communicate with her oligarch friends that the Russians are on Trump's side. We've got an email to that effect ...

It is weird how Fusion GPS was able to trick Don Trump Jr. into writing "an email to that effect" saying "I LOVE IT" to the chance of conspiring with the Russian government for "dirt" on Hillary Clinton, and how Hillary Clinton conspired with Russia to trick him into that too, while also conspiring to lose herself the election.

Anyway, Graham, having jumbled these facts together all cattywampus in ways he hopes you don't notice (or that he doesn't understand himself, perhaps because he's had too much Jameson), decided to get the very good and valid witness to agree with him on a very good and valid point that is ENTIRELY UNRELATED TO THE EVIDENCE PRESENTED IN THIS HEARING:

GRAHAM: Is it common for Russia to play both sides against the middle?

GRAHAM: So ... you believe Fusion GPS is actually backed by the Russians [dude still didn't say that], they're trying to create, find dirt on Trump [for a different client]. Uh, you believe this Russian lawyer Natalia's workin' for the Russians. She has been introduced to Don Jr. by a business partner of the Trumps, saying the Russian government's behind you, they want to help you, you need to meet with this lady. That's kinda interesting.

WHOA IF TRUE! IT'S A CONSPIRACY! REPUBLICANS DONE MADE A SMART AND FIGURED IT ALL OUT! Prevezon, which is Russian, hired the lady lawyer Natalia Veselnitskaya, who is Russian, and they hired Fusion GPS to work on their case, ERGO anybody else who hires Fusion is working with the Russians, because Fusion represented a Russian one time.

If THAT is the criteria for discrediting somebody, then we need to get rid of all of Donald Trump's cabinet members and nominees and lawyers who ever worked for Russians, which is ALL OF THEM KATIE.

Now this is weird and stupid and convoluted, but lazy "journalists" are picking it up. RealClearPolitics has an incorrect headline about this hearing, which says Fusion was "acting on behalf of Russia" in its creation of the Steele Dossier. WAY TO READ, DICKHEADS.

Elsewhere in the hearing, a couple of interesting points were made when Democratic Senator Sheldon Whitehouse questioned Bill Browder. The Russians lobbying Donald Trump Jr. have been working to repeal the Magnitsky Act for years, both with Russia-loving congressmen like Dana Rohrabacher and directly with Trump people. The senators on the committee found this funny, in a bipartisan way, because there's not a chance in hell they're going to do that. Whitehouse pointed out, though, that the president does have the power to remove names from that OFAC sanctions list. So ... let's just say a SKINNY REPEAL possibility exists, where the law could stand, but Putin's buddies could find themselves magically stricken from the list if Trump was wanting to, oh we dunno, fulfill some sort of quid pro quo he has with Putin, ALLEGEDLY. (For the record, Whitehouse said Congress is looking at closing that loophole right now.)

Whitehouse also asked Browder how important it is to follow the money in sussing out Russian interference in our election, and Browder replied, "Following the money is key to ALL of these type situations." So we guess special counsel Robert Mueller is on the right track right now!

No wonder Donald Trump is so fucking spooked.

Wonkette salaries are fully funded by lovely souls like you! If you like it when we watch three hour hearings so you don't have to, click below to fund us!