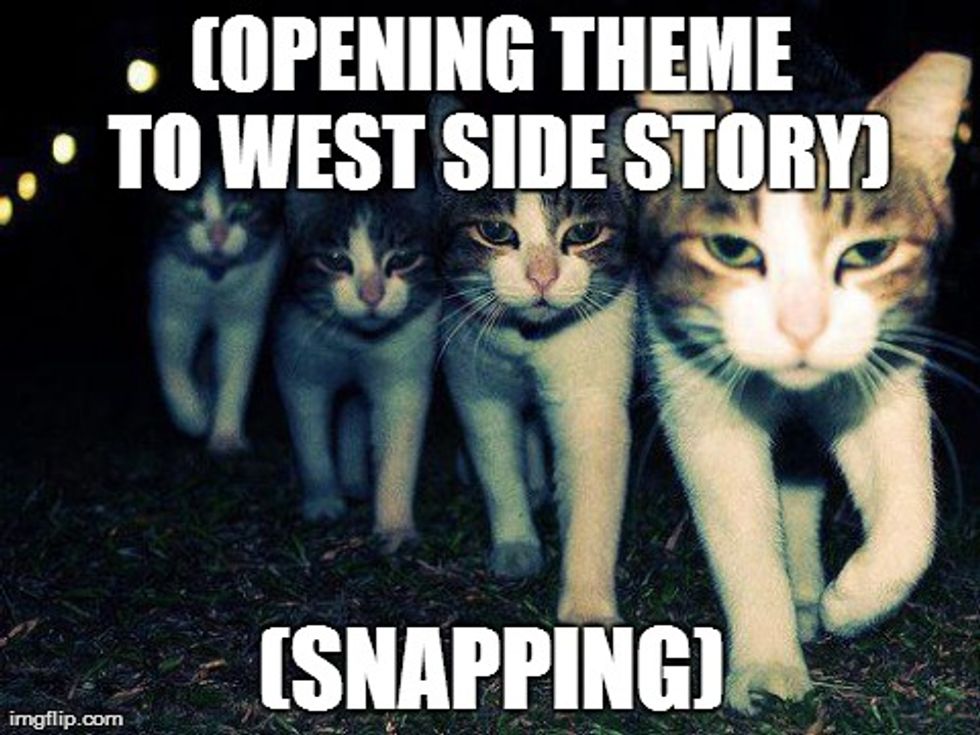 These cats are gonna FIGHT TONIGHT.

Has it been a long time since you pulled your Underoos up over your nipples (that's how you get comfortable), popped open a can of Spam and watched a presidential debate? No, it hasn't! You watched one on Wednesday night, and it was the Hillzbian and the Bernzbian yelling at each other and sometimes being nice to each other, like common adults. You haven't watched a GOP debate in like a whole week though! But tonight you will.

Here, let us help you with all your burning questions about life, love and the GOP candidates.

Why won't Marco Rubio high-kick his perky ass out of this race for heaven's sake?

[contextly_sidebar id="zKwRhV8Z4cihZDwf2TmNFtsOgqRPMTmo"]BECAUSE, you guys. He says he's going to win his home state Florida primary on Tuesday, which will change EVERYTHING. And yeah, we get it, Little Marco is basically the biggest loser in Losertown, as evidenced by his shitty performance in Tuesday night's primaries. But don't you get it? He is winning even when he's losing! Especiallywhen he's losing! He doesn't even do delegate math!

Please just let him hang around a little while longer, he has no place else to go.

So, like, Donald Trump is going to win this thing, isn't he? For real?

It sure looks that way! There is a theory on one of the pages of the internet, in the "Vox" section, that Ted Cruz is the rotten cheese curd spoiling the poutine in this here Republican primary. Because, according to this theory, Cruz is a fucking asshole who doesn't care about the party anyway, and also he is a dumb moron pussbaby who really thinks he is going to beat Donald Trump. Because obviously (obviously!) Cruz has won SO MANY states so far. Obviously.

So he's trying to push Rubio out of the race in Florida so he can go (basically) pighead to pighead with Trump. (Yes, John Kasich, we know you're still running. No, we don't care.)

Also too, the Florida primary is winner-take-all. So, when Trump wins all Florida's 99 delegates, he jumps WAY ahead in the math. That's fairly likely, with Rubio and Cruz splitting the rest of the vote, also known as "losing." (We know, we know, Little Marco, you say you're going to "win.")

Is that a good theory? That Ted Cruz is delusional enough to think he will win, and his dumbass ego might just hand this whole thing to Trump?

Uh, well, it involves Ted Cruz being a smegma-lipped foreign-born twat, so it's probably at least 60 percent true.

Will Ted Cruz literally try to push Marco Rubio out of the race tonight? Is Little Marco gonna get trampled by the bigger kids?

Anything else? Will Donald Trump dickpunch the moderators and his competitors with his allegedly deformed pigtail peeny-weeny?

So we really do have to watch these four nincompoops bicker over their dicks again.

Hey Wonkette, you know about dicks, who really has the biggest dick in the presidential race?

OK FINE WONKETTE, but you have to pick a actual boy penis-haver!

OK FINE GENTLE READERS, let's go with Canadian Prime Minister Justin Trudeau. (You were wondering how we were going to reach around to him this time, weren't you?) Oh hey, here is a sexxx picture of our Justin at the Calgary Stampede. Trivia fact: "Calgary Stampede" is also the name of the phenomenon that occurs when Ted Cruz and his dry-drunk dad both get the runs at the same time. It's super gross.

Justin Trudeau is not part of the Republican debate, which airs on CNN at 8:30 PM ET, and can be watched on either the CNN television channel or on the CNN internet address website.

HOLY SHIT YOU LOOKED IT UP FOR YOURSELF FOR ONCE. Way to go, boldface question-asker-person!

And yes we will be liveblogging, because we work late every night this week apparently. See y'all then!