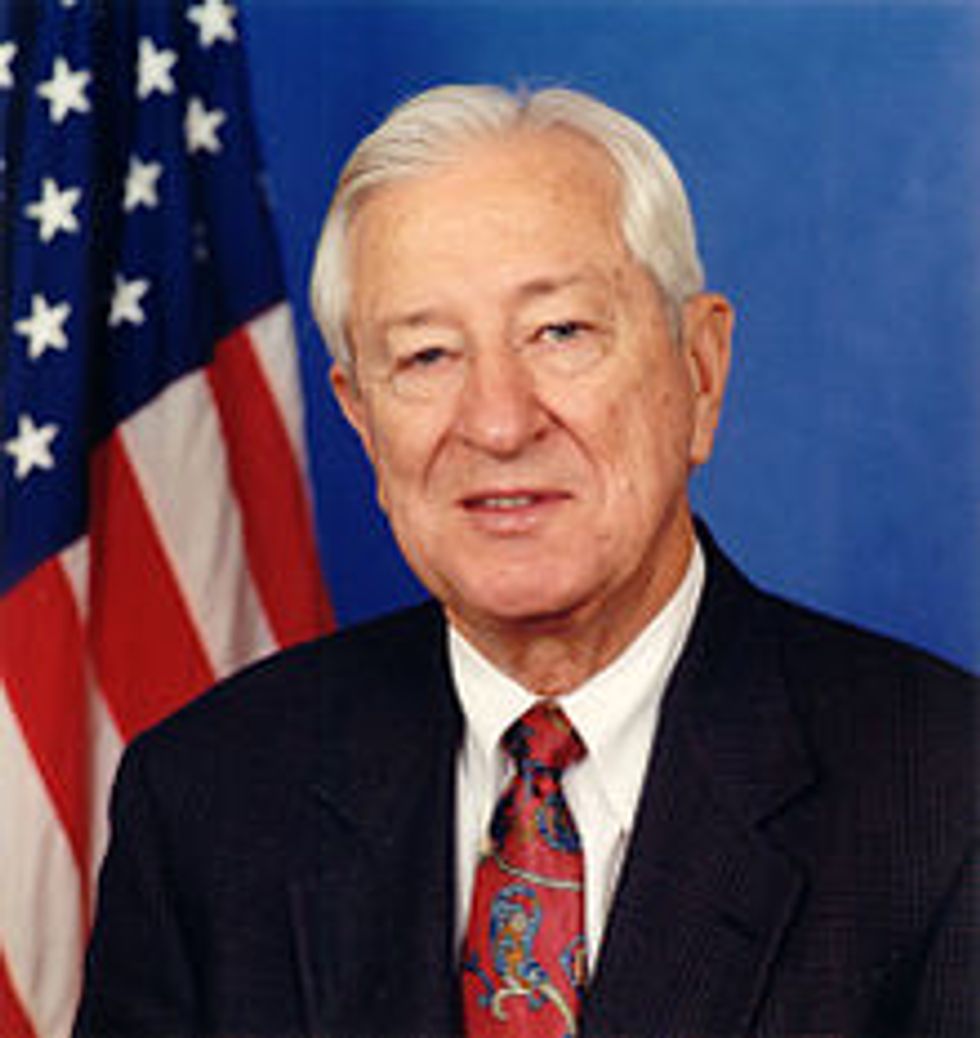 The Capitol is a large complex consisting of several buildings and a series of underground tunnels connecting them, so it can be a confusing place to navigate. However, Rep. Ralph Hall, a conservative Texas Republican and supporter of traditional marriage, has been in Congress for more than 30 years so surely he knows his way around. Which makesthis Houston Chronicle piece so awesome:

Rep. Ralph Hall showed up at an LGBT event for the Victory Fund last week...the Rockwall Republican sipped his drink and made polite conversation.

Hooray!  Happy nice time! When a 90-year-old dude with a Texas drawl who voted for DOMA shows up to support the LGBT community, it is truly a sign that the gays are taking over in a pagan onslaught of homosexual marriages!

But alas, it was all too good to be true. It was more like that time when Homer Simpson wandered into the gay steel mill. Hot stuff comin' through!

As it turns out, Hall and his staffers were under the impression that they were attending an event for a fellow congressman, an event scheduled for that same day. After being welcomed into the event and offered refreshments, Hall inquired about the congressman whom he was there to support. After being told that he was indeed in the wrong place, the longtime conservative quickly left the premises -- that is, as quickly as a 90-year-old can physically leave a premises.

No, come back! Didn’t you see that all these nice gay boy scouts turned out to be very pleasant people who offered you food and drink and were able to carry on polite conversation without forcing you to gay marry someone immediately? No need to scurry away! Just sit back, relax and open your mind.

Of course, many attendees were just as surprised to see the Congressman as he was in showing up. According to Justin Snow (@JustinCSnow for you tweeters), “GOP Rep. Ralph Hall, a DOMA supporter, wandered into Victory Fund Pride reception. He seems to be lost.”

We started to feel sorry for Rep. Hall. Sad old man gets lost and is suddenly surrounded by dirty hippies and gheyz. But then we realized that he is a total dick to our LGBTQMORELETTERS friends. He voted for DOMA, against the repeal of Don’t Ask Don’t Tell, twice for a Constitutional amendment to establish marriage as between one man and one woman, and according to The Political Guide:

co-sponsored H.R. 1269, the Marriage Protection Act of 2009. This legislation would prohibit federal courts to hear or decide any question pertaining to the interpretation under the Constitution of the provision of the Defense of Marriage Act. This act declares that no state is allowed to approve any marriage between persons of the same sex under the laws of any state.

Thank you very much, Rep. Hall, for totally ruining what could have been a very sweet nice-time story about how you wandered into the wrong place and suddenly realized something about the basic decency of your fellow human beings. We hope you are pleased with yourself. Maybe next time there's a vote to decide whether all Americans are really equal, you could do us all a favor and just get lost.