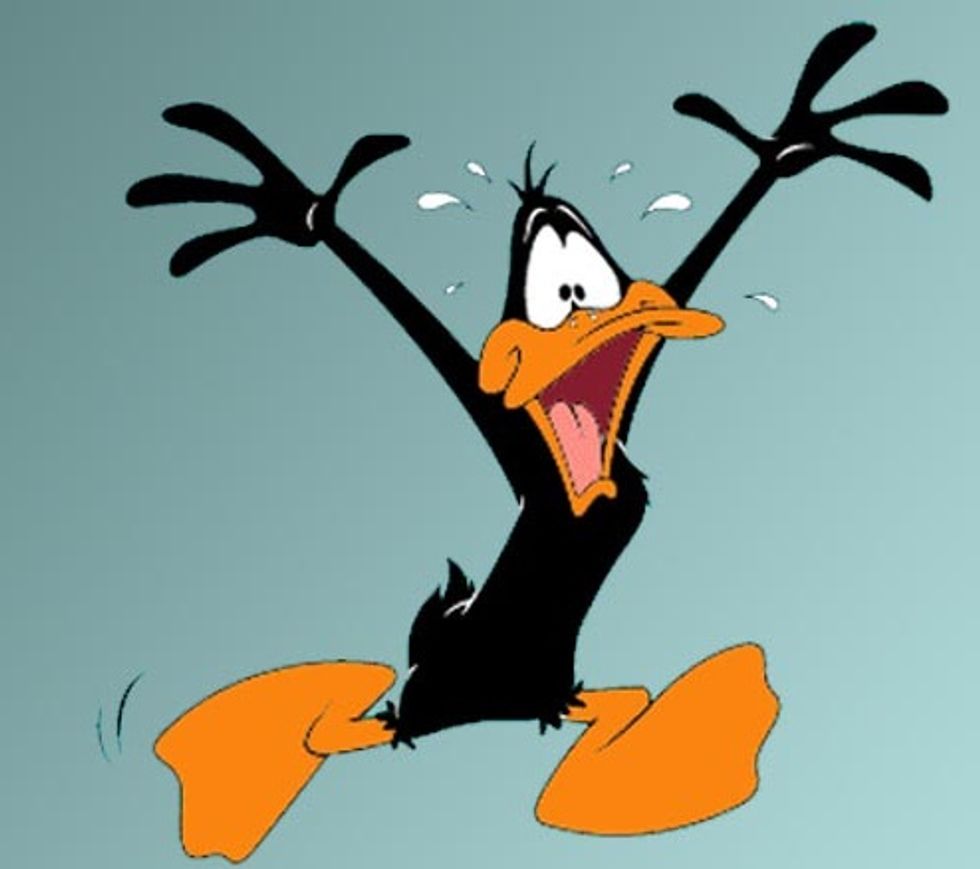 Welcome to all our Wonkettarian brothers and sisters. Our Inspirational Verse today comes from the Book of Chuck Jones and the Testament of Daffy, who sayeth,

"After all, it was me or him, and obviously, it couldn't be me. It's a simple matter of logic. I'm not like other people. I can't stand pain. It hurts me."

Friends, let us keep in mind this wisdom from a little black duck before we too harshly judge sister Renee Elmers of the 2nd Congressional District of North Carolina. Even though some 70 members of the House and Senate are either donating their pay to charity or refusing a paycheck during the government shutdown, Rep. Elmers has a far more practical approach to the question:

"I need my paycheck. That's the bottom line," Rep. Ellmers told ABC affiliate WTVD. "I understand that there may be some other members who are deferring their paychecks, and I think that's admirable. I'm not in that position."

She isn't like other people. She needs her paycheck. What is wrong with you liberal media goons that you don't recognize the basic fairness of this? It's not like she voted to put other people out of work, except for the part where she proudly voted to defund the Affordable Care Act, triggering the shutdown.

Gawker notes that Ellmers' husband is "a general surgeon who runs his own practice," which may mean that her family is faced with penury now that Obamacare is going into effect.

Joining Ellmers in this inspiring "I Got Responsibilities" stance is Nebraska Rep. Lee Terry, who, when asked by an Omaha paper if he was planning to continue accepting his pay during the shutdown, answered, "Dang straight." As for other members of Congress who are forgoing their pay, Terry explained that unlike other people, pain hurts him:

"Whatever gets them good press. That's all that it's going to be. God bless them. But you know what? I've got a nice house and a kid in college, and I'll tell you we cannot handle it. Giving our paycheck away when you still worked and earned it? That's just not going to fly."

Ellmers' comment is becoming something of an emblem of the shutdown, and the Internet Is Not Pleased. Lee Terry, on the other hand, doesn't seem to have gotten quite as much attention yet. Perhaps he needs to invite some of the Capitol Police who worked without a paycheck yesterday to come visit his nice house.

We'll give even odds that at least one of them will announce that that their pay will go to crippled children by the end of the day, unless of course some other big news story blows up to distract people. Heaven knows there's no shortage of other idiots saying dumb things this week.

Schadenfreude-Filled Update: The Charlotte News & Observer is reporting that Renee Elmers has requested that her salary be withheld during the shutdown. Yr Wonkette takes all the credit, of course, though we'd also note that "withheld" mostly just means that once the shutdown is over, she still gets her moneez. She could do better -- for instance, she could follow the lead of Minnesota's Sen. Al Franken and Rep. Tim Walz, and donate her salary to help food banks that will be picking up some of the slack during the shutdown.

Time for Lee Terry to get his act together, too, don't you think?