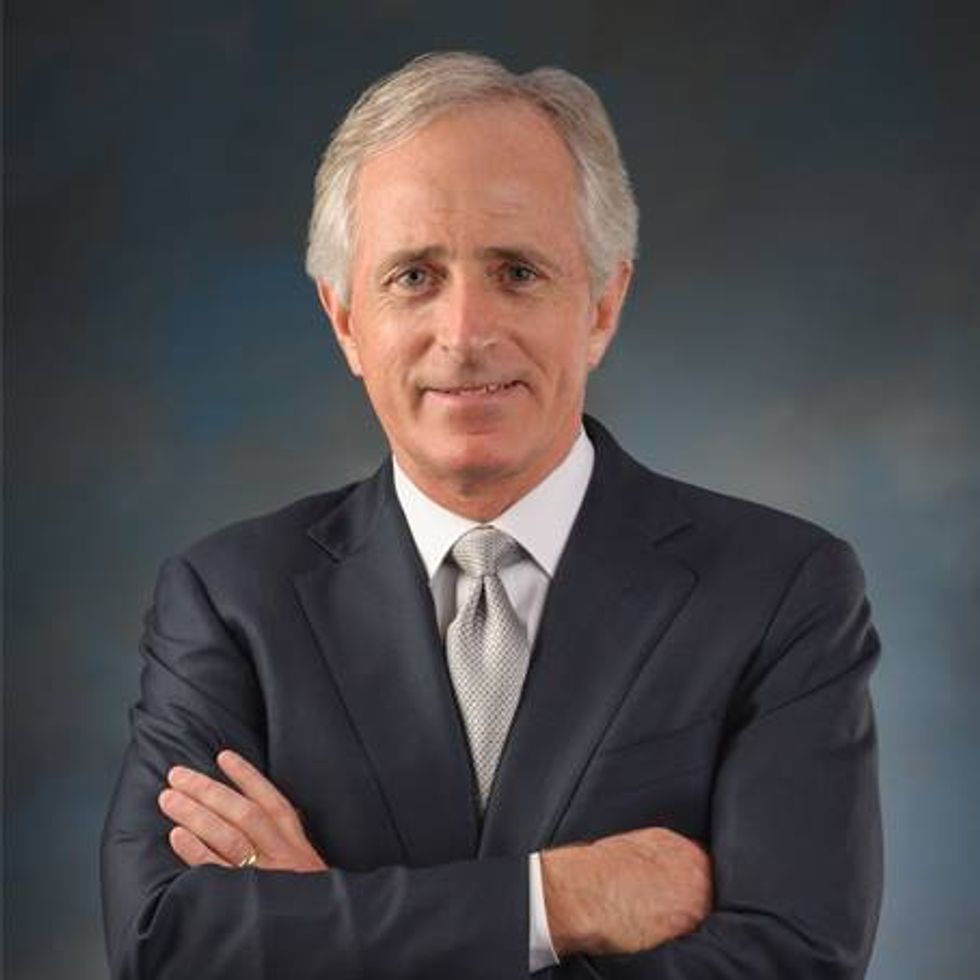 Retiring Tennessee GOP Senator Bob Corker made news Sunday when, in response to being shit-tweeted by President Fuckhead, he tweeted back that "It's a shame the White House has become an adult day care center," adding that "somebody obviously missed their shift this morning." Shots fired, y'all! Adult daycare jokes are rough.

The responses from liberal-land came in two forms. Some simply popped open a beer and watched the show, because OMG this is some Bring It On Again shit right here! Others immediately chimed in to remind us that Bob Corker is no angel. And they're correct! But maybe they are missing the point?

It's true that Corker has done a lot of fucked up things. The race-baiting ads he ran against Harold Ford Jr. in his first campaign come to mind! He is not a hero. But he is doing something important right at this moment. We feel like both of those things can be true at the same time, no?

We see people out there (some of whom we like very much!) suggesting people are "canonizing" Bob Corker for clapping back at Trump. Really? ARE WE? We haven't taken roll of every liberal in America this morning, but we're fairly certain nobody is looking at Corker and asking, "Who IS this man from Nazareth????" NOBODY.

We should acknowledge, though, that while Corker's been a real piece of shit in the past, and while it would have been nice if he had done this DURING THE CAMPAIGN, how significant it is that a very powerful senator from Trump's own party, chair of the Senate Foreign Relations Committee, who was a huge Trump supporter during the campaign, is saying "fuck all this" and reading the president for filth. Sure, Corker is retiring, but he's got FIFTEEN MONTHS left. He can still do a lot of damage.

Most sane people know Donald Trump is an existential threat to the planet. Perhaps Corker is just now understanding this, or perhaps he's just now willing to understand it OUT LOUD. We've been hearing off the record comments in the Fake News for months about how unnamed elected Republicans, especially in the Senate, are privately horrified by Trump. Now we finally have a Republican senator forcefully going on the record, saying Trump is a liar, a piece of shit and a danger to humanity. We need to let this moment happen, and we need to encourage Corker to keep talking, and start acting, and convincing his GOP colleagues to do the same, because they're the ones with the power to actually do something about Trump right now.

With that being said, after Corker's clap-back, he talked to the New York Times and said about a million more nasty, hilarious and pointed things about Trump. Here's some of that:

Senator Bob Corker ... charged in an interview on Sunday that President Trump was treating his office like “a reality show,” with reckless threats toward other countries that could set the nation “on the path to World War III.”

In an extraordinary rebuke of a president of his own party, Mr. Corker said he was alarmed about a president who acts “like he’s doing ‘The Apprentice’ or something.”

“He concerns me,” Mr. Corker added. “He would have to concern anyone who cares about our nation.”

Y'all, that is just the first three grafs of the NYT interview. It only gets nastier from there.

Corker flatly states that Trump is lying through his teeth about Corker "begging" for his endorsement, and reaffirms that the Trump White House is the exact kind of "adult daycare" he said it was:

“I know for a fact that every single day at the White House, it’s a situation of trying to contain him,” Mr. Corker said in a telephone interview.

Corker is also pissing all over the idea that Trump and Secretary of State Rex Tillerson, one of many living humans who thinks Trump is a "moron," are playing some sort of good cop/bad cop game with North Korea, stating that it's "just not true."

Anything else, Senator? Wanna tell us some dirty gossip about just how much disdain your GOP colleagues in the Senate have for the GOP president? You do? Hooray!

All but inviting his colleagues to join him in speaking out about the president, Mr. Corker said his concerns about Mr. Trump were shared by nearly every Senate Republican.

TRANSLATION: With the exception of the stupidest people in the Senate (probably Chuck Grassley, we are guessing), literally everybody hates Trump. Join Bob Corker out here in the sunlight, Republican senators! We promise, you'll be OK! And even if you're not, this is about AMERICA, and not about your re-election prospects, you fucking dicks.

“I don’t know why the president tweets out things that are not true,” he said. “You know he does it, everyone knows he does it, but he does.”

Because he's a sick, stupid man. Simple as that.

Toward the end of the interview, Corker struck a backhanded high note by saying "we'll be fine" as long as the "good guys" -- John Kelly, Jim Mattis, Rex Tillerson -- are there to talk the baby off the ledge when he gets "spun up." The inverse of that statement, of course, is that if the "good guys" aren't there, OH GOD WE ARE SO FUCKED. Like we said, back-handed.

Keep talking, Bob Corker. You're neither the hero we want nor the hero we need, but we're more than willing to giggle and point and laugh while you fuck that idiot the fuck up with words. (AND THEN ACTIONS, PLEASE AND THANK YOU.)