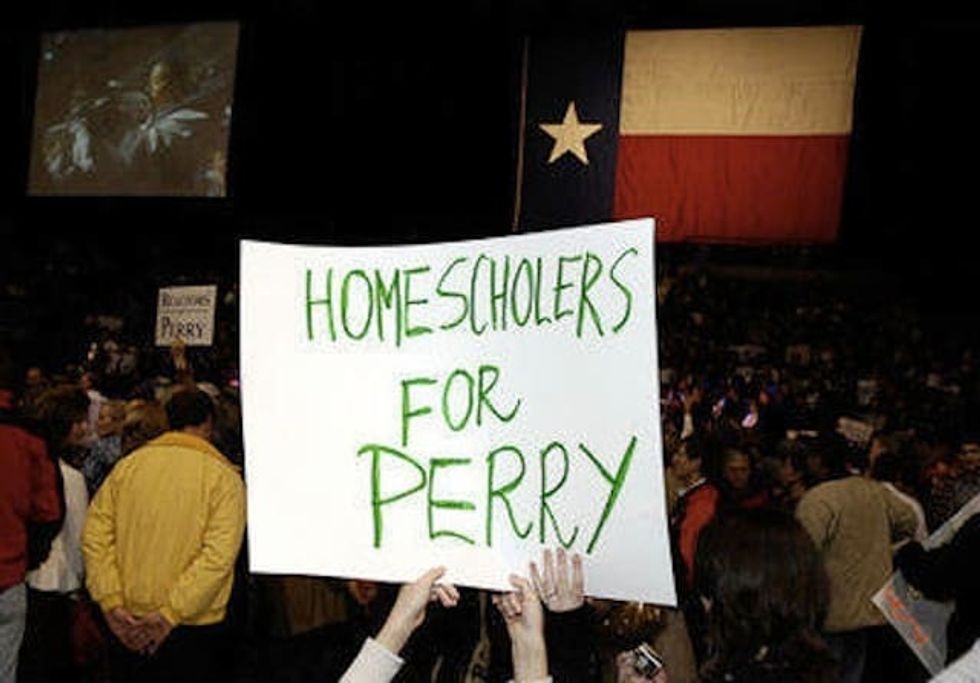 We know we've been going on and on about how the stupid Republican Tax Cuts For Rick Fuckwads Bill is all about tax cuts for rich fuckwads, but let's be fair: Some of the provisions in the Tax Cuts For Rich Fuckwads Bill are actually aimed at benefiting fuckwads who aren't necessarily rich. For instance, one exciting amendment added by the Senate's smarmiest smarmface, Ted Cruz, will extend the tax-free savings benefits of the 529 college savings plans to parents who want to use the funds for religious and private schools, or even for homeschooling. That way, you don't have to send your precious darlings off to college -- where they're likely to have godless secular humanism crammed down their throats until they become SJW genderqueer vegans -- to take advantage of big tax-free savings.

The rightwing Washington Examiner is just over the moon at the news:

The amendment, which would allow $10,000 per child to be distributed from tax-privileged 529 savings plans each year, was included in Friday’s joint House-Senate conference bill. It would represent a tax cut of about $500 billion over 10 years, according to Congress’ Joint Committee on Taxation.

With the Cruz amendment’s inclusion, passage of the bill would represent a major advancement for school choice at the federal level.

By "school choice," of course, they mean "transferring tax money from the public into the hands of religious institutions and Bible-thumping homeschool parents," in accordance with God's plan for America. Parents lucky enough to live in states that offer school vouchers for private or home schools, like Louisiana or North Carolina, could presumably get a voucher AND take advantage of the expanded 529 savings, so whatever they might pay in property taxes for the government schools will be more than offset by other taxpayers. And if Secretary of For-Profit Jesus-Based Education Betsy DeVos has her way, there'll soon be federal vouchers available to further demolish public schools. You could make a pretty good living telling kids there's no such thing as evolution.

Even with all the new money that will be available for yet another wave of sketchy private schools that will no doubt bloom all over the land, the supporters of privatized education didn't quite get everything they wanted from the expansion of 529 plans. The House version of the bill included a provision that would have allowed people to start 529 plans for their fetus, so they could sock away even more tax-free money for an extra nine months. Sadly, it wasn't included in the final version that came out of the conference committee. Probably because Democrats hate babies.

And while this is just one more part in the GOP's war on public education, the final version of the tax cut bill does at least throw one tiny bone to public school teachers: It keeps the $250 tax deduction for teachers to buy supplies for their own badly under-funded classrooms, which the House version of the bill had axed. So shut up and stop complaining while the Trump administration undermines every other aspect of public education.

Yr Wonkette is supported by reader donations. Please click here to help us fund the Wonkette Endowment For Kids Who Don't Read Good And Wanna Learn To Do Other Stuff Good Too.