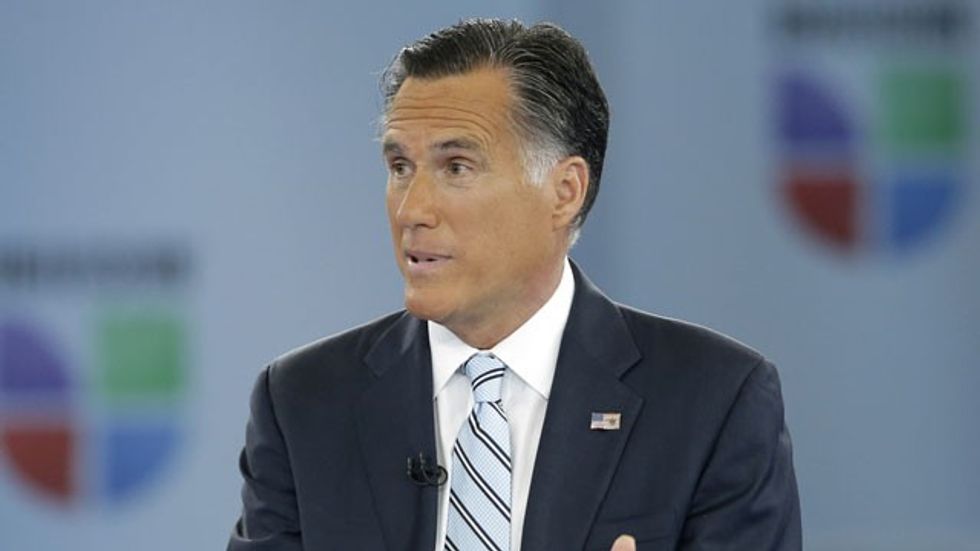 Oh, man. We were already aware thatEgg Romney simply does not care for backtalk from The Help, and that Miffed Romney may not be great under pressure (or ever?). And Miffed Romney hasn't had a good day we can remember since his Mr. Bean-level disastrous trip to Europe, which spawned the eternal, plaintive question "What about your gaffes?" But FUCK ALL, Buzzfeed has quite a story about Miffed's trip to see the Mexicans at the Univision forum today, from sources both on the record (a Univision anchor, who detailed the many last-minute demands the campaign made) and off (a GOP source who says Romney threw a "tantrum" and refused to go on). A tantrum, Miffed? In front of people you are not actually paying? BEST. NOMINEE. IN HISTORY.

While introducing Romney at the top of the broadcast, [Maria Elena] Salinas's co-anchor, Jorge Ramos, noted that the Republican candidate had agreed to give the network 35 minutes, and that Obama had agreed to a full hour the next night. Ramos then invited the audience to welcome Romney to the stage — but the candidate didn't materialize.

"It was a very awkward moment, believe me," Salinas said.

Apparently, Romney took issue with the anchors beginning the broadcast that way, said Salinas, and he refused to go on stage until they re-taped the introduction. (One Republican present at the taping said Romney "threw a tantrum.")

Let's repeat that: Mitt Romney THREW A TANTRUM because he didn't like the anchor noting that he'd agreed to appear for 35 minutes as opposed to Barack Obama's hour. And then he REFUSED TO GO ONSTAGE until they retaped the intro. We are starting to think Miffed Romney, in addition to having what we suspect is Asperger's-induced Insult People To Their Faces Constantly Syndrome, also might have a problem of temperament.

But oh, there is ever so much more. How many haughty demands did the Romney camp make on Univision? (All of them, Katie.)

Here are a couple!

They were given an exemption, and "bus[ed] in rowdy activists from around southern Florida in order to fill the extra seats at their town hall."

When the Republican took his place Wednesday night in the first of two back-to-back candidate forums televised on the mega-network, he was greeted by an adoring, raucous crowd that cheered his every word, and booed many of the moderators' questions. The next night, President Obama was treated to stone cold silence from the audience as he was aggressively grilled on his lackluster immigration record.

The only thing anyone will remember from the Univision forum, of course, is Miffed's disastrous brownface. According to Salinas, the makeup lady swore it was just Miffed being sunburned. We'd imagine it's more along the lines of The Help shitting in the chocolate pie. But we're sure that Great American Hero makeup lady is right, because that way she gets to keep her job.