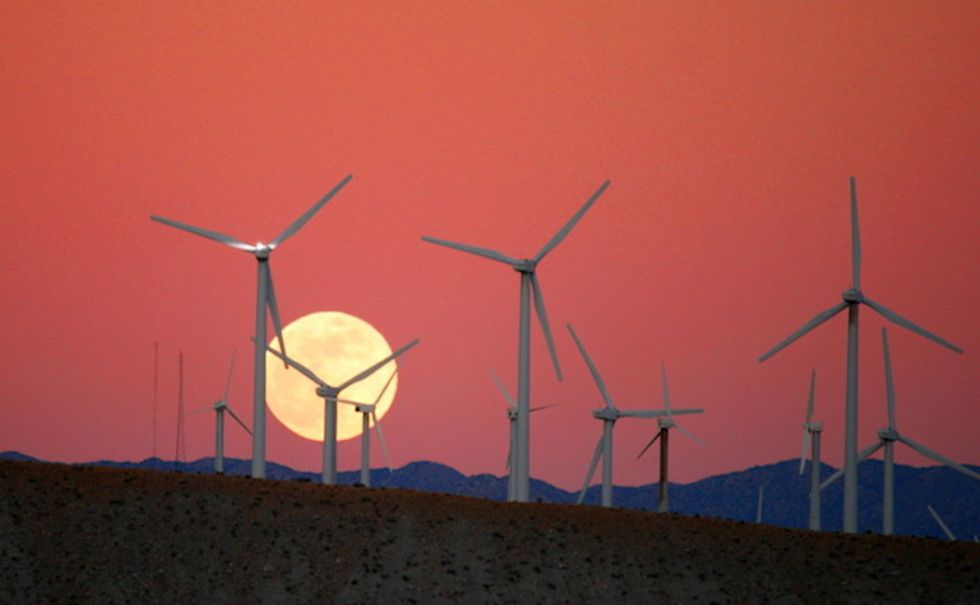 Why isn't Mercedes sponsoring wind farms? The branding is right there!

As we all know, Republicans believe in the free market and hate the idea of Big Government picking winners and losers in the economy. Which is why the House version of the tax cuts for the rich bill kills off existing tax incentives that have boosted the renewable energy industry, and keeps in place tax subsidies for oil, gas and coal. The Senate version of the bill preserves the tax credits for renewables, but at the last minute (OK, the day before Thanksgiving, which for this still-unwritten bill is a LONG TIME) tossed in another provision that could kill off half the planned wind farms in America. Whoever thought of that must be rolling coal in joy.

It's not entirely clear whether the Senate version was designed to hit renewables especially hard, or if the damage it would do is just collateral chaos resulting from an attempt to stem the fiscal bleeding caused by tax cuts for corporations and the rich. The American Prospect explains:

A new proposal, the Base Erosion Anti-Abuse Tax (BEAT), targets multinationals that stash money overseas to avoid paying U.S. taxes. Under the proposed change, these corporations would lose many of the deductions they typically claim.

But the tax would also effectively cancel out the renewable credits enjoyed by the multinationals that play a major role in financing renewable projects. Typically, when companies like Goldman Sachs or Facebook invest in a renewable energy project, they get a portion of the profits along with a renewable tax credit. On average, these agreements make up between 40 percent and 60 percent of the capital costs for new solar or wind projects.

If BEAT swallows up those credits, corporations may be far less likely to invest in renewable energy projects, which could deal a severe blow to solar and wind energy production. BEAT would also apply retroactively, threatening existing renewable projects.

We Must Pay West Virginia To Mine More Coal, So We Can Fight The Kaiser!

Maybe we could sell higher teacher salaries and smaller classes as vital for National Defense.

So whether by accident or design, the BEAT proposal would starve renewable energy developers of capital, even as the Trump administration is considering huge price supports for coal, which continues to lose out in the market to cleaner natural gas and to renewables, largely because utility companies are aware the long-term prospects for coal are still terrible.

Using the tax code to punish wind and solar development would actually hit states that voted for Trump hardest:

The states that voted for Trump produce nearly 70 percent of wind energy, while 85 percent of existing wind projects are in GOP-held congressional districts.

Not that Trump voters would care, since they know there's no such thing as global warming, and that killing off clean energy is the height of humor because it pisses off the libs. Never mind that there are almost three times as many people employed in the solar industry than in coal -- those are bad socialist jobs, so they must be eliminated to allow the flourishing of beautiful coal and oil jobs.

Four trade industry groups that represent clean energy have been lobbying the Senate to strip out the tax provisions that would hurt the industry, but it's unclear whether Senate Rs will be open to such radical greenie talk. They've got a rewrite of the American economy to pass this afternoon, and at this point, what's in it doesn't really matter.

Your editrix adds here that she once tweeted about "say goodbye to Hillary Clinton's 500 million new solar panels" and a Jill Stein voter responded "we have 500 million solar panels now. That is literally the status quo." Well, not any more it's not, great job everyone, good night!