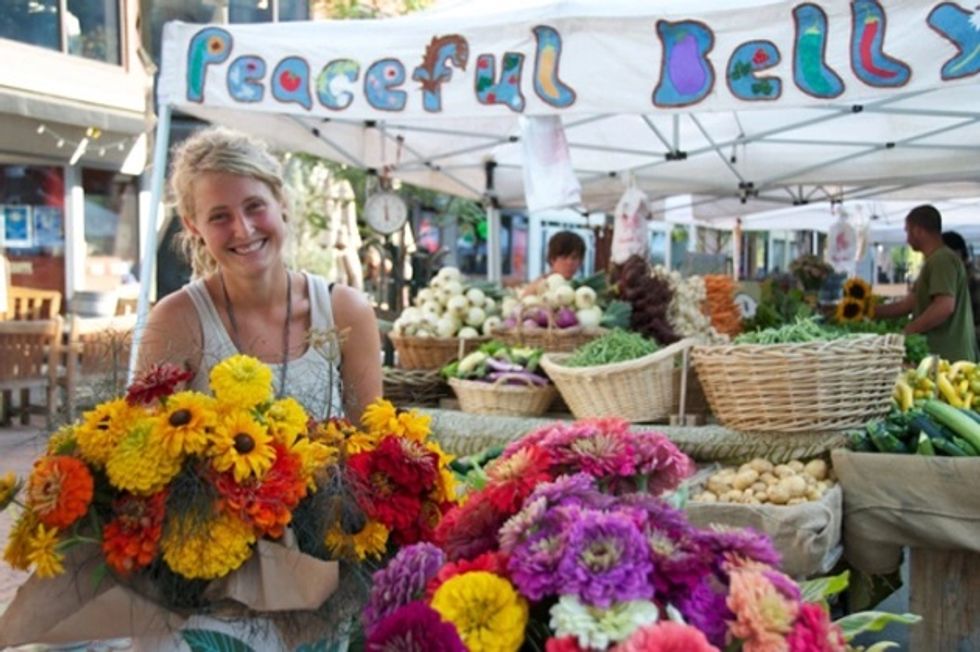 You organic veggies! Get in mah peaceful belleh!

In yet another front of the Trump administration's pursuit of a scorched-earth culture war, the administration's budget proposal has zeroed out funding for the Department of Agriculture's Farmers Markets Promotion Program (FMPP), a modest grant program that means a heck of a lot to the small, local farms that provide locally grown food as an alternative to Big Agribusiness.

The annual budget of the FMPP is hardly a budget-buster -- just $15 million in the most recent Farm Bill from 2014 -- but while the program only has five full-time employees, they do neat stuff to “support outreach and promotional activities that help direct producer-to-consumer markets become self-sustaining and be repeated in communities across the country," as the USDA puts it. And Trump doesn't even have to kill it off as an evil invention of the Obama years, since it was first funded in 2006 by those crunchy granola hippies in the G.W. Bush administration. Since then, the number of farmers' markets nationwide has more than doubled, from about 3,000 to over 8,600, with a corresponding expansion in sales of patchouli and Birkenstocks.

Most of the grants from FMPP since 2008 have gone to agricultural nonprofits, with smaller numbers of grants going to producer groups and local governments to develop the farmers' markets. The total spending on the program since then, $58 million, is, for purposes of comparison, a couple million bucks less than the budget request the Secret Service made to cover the extra costs of providing security for Donald Trump's bigass, well-traveled family for 2017. But that money matters to the little farms trying to make it in a cold world full of chemical fertilizers and agribusiness giants:

“Most farmers’ markets are operated by nonprofits, community agencies, or small business enterprises,” said Martin Bourque, executive director of the Berkeley-based Ecology Center, which has long advocated for and operated farmers’ markets. “They don’t have the margins to mess around. Losing even a small portion of money for promotion, outreach, events, marketing—things that supermarkets have a huge budget for—pulls a lot of support from what isn’t a very level playing field to begin with.”

Jen Cheek, the executive director of the Farmers Market Coalition, is still hopeful the funding for FMPP may be restored, like if somebody says "family farms" or "small business" to Trump a lot, or, more likely, if supporters of small farms and farmers' markets make noise to the right people in Congress. She's encouraged that Secretary of Agriculture Sonny Perdue has said nice things about farmers' markets in testimony to Congress. He also signed a proclamation for "National Farmers' Market Week" in August, which certainly beats a proclamation for National Despoil and Evict Day -- though to be fair, that's been handed over to the EPA anyway.

Borque is hopeful farm state congressional delegations will push to restore FMPP funding to help move reauthorization of the farm bill along, but acknowledged, in a fine bit of understatement, that we're in "an uncertain public policy era; we get multiple mixed messages from the administration, and you never know whose perspective will prevail.”

Maybe there's some way supporters of farmers' markets could get the Trump administration's attention, like maybe offering to look for coal while they're planting crops, or offering coupons for McDonalds and KFC along with each purchase of kale. Perhaps it's just a matter of appealing to the administration's tough side. Instead of a stoner hippie worm logo, for instance, this Boise area organic farm might put a camo outfit on the little guy and give him an AR-15.

Farmers' markets are worth supporting, especially since without strong community support, that market niche could well be overrun by unscrupulous businesses that let vegan babies wander around showing their buttholes and yodeling at innocent shoppers.

Yr Wonkette is supported by reader donations, man. Click here to support us, if that's your bliss, you know?