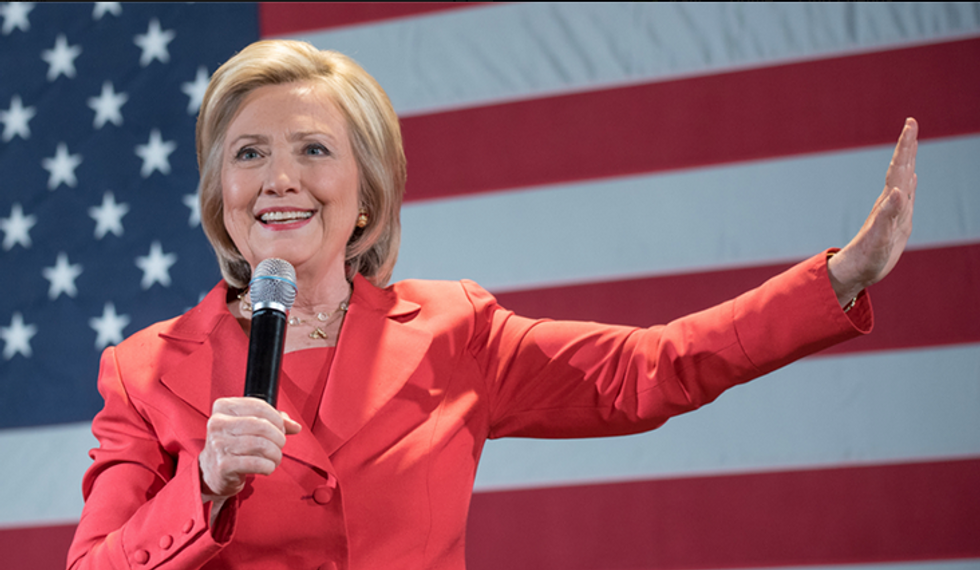 Talk to the hand, and also YOUR MOM

Once upon a time, there was a guy with with a real dumb redundant name that is dumb, and for an entire millisecond, he fancied himself a great defender of womenfolk and decency. And fellow feminist icon Jeb! Bush declared him to be "on the side of women," so it must be true.

All because the Republican Party's favorite asshole made a sexism by saying "journalist" Megyn Kelly had a nosebleed in her vagina. And lo did Erick Erickson swoop in and save the damsel in distress, by crying out "Have you no decency, sir?!" and telling Donald Trump he was no longer invited down to Georgia to suck on all the cuckservative weenies with the rest of the GOP presidential field. But Megyn Kelly, she was invited now, because Erickson wanted to stick it to Trump. "Oh, Erick," all the ladies swooned, "you are our hero!"

Yeah, well, that's over now. On the front page of Erickson's Internet Home For Angry Splooge Socks, there is a lovely sentiment about Hillary Clinton:

If Hillary Clinton possesses any unique selling propostion [sic] beyond proving even a homely woman can sleep her way into power, it is her tenure as Barack Obama’s secretary of state.

Awww, that's some purty talk, innit? Original, too, making the fresh new jokes about how the Ivy League valedictorian and attorney only got there because of how she boned her husband, even before she knew him. Sure, it's no "Sit Down, Abortion Barbie" or "Fat Lesbians Got All The Ebola Dollars," but it's pretty good for a RedState contributor who does not have the same name twice.

And surely, now that True Southern Gentleman Erick Erickson is all growed up and has learned to stop being an asshole, once he hears about this unacceptable line-crossing on his very own site of which he is editor-in-chief, he will no doubt swoop in once more to condemn such language and disinvite author "streiff" from saying such unkind things, about a lady, ever again. Once he's done demanding that the Republican Party kill itself in the face if it lacks the balls to shut down the government to defund Planned Parenthood, and patting himself on the back for being such a great feminist, that is.