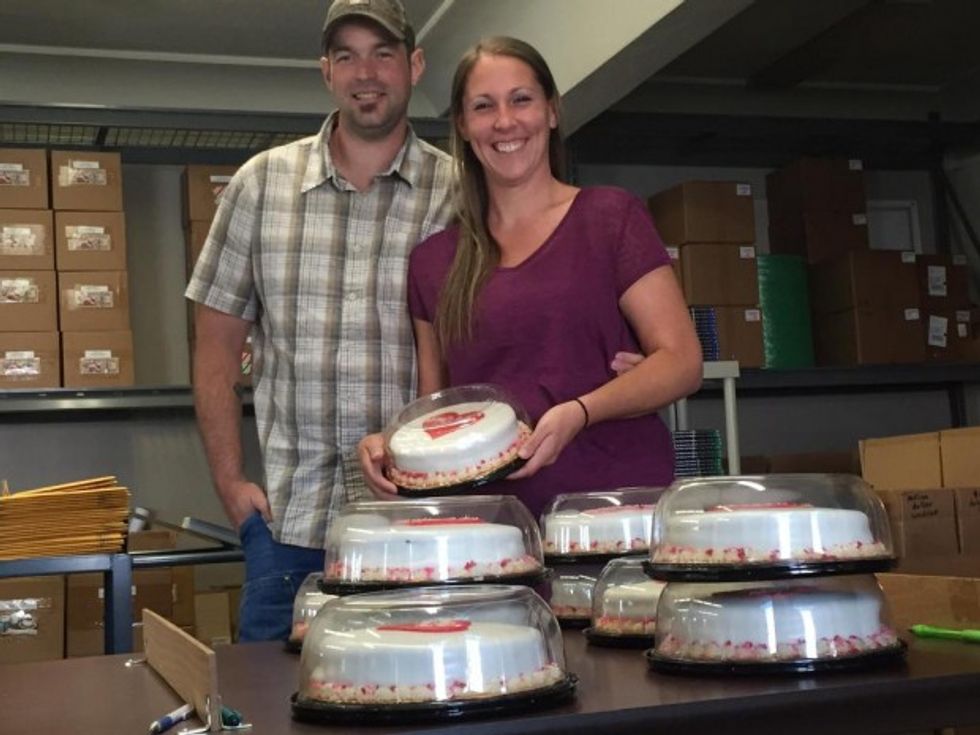 Last we'd heard, those poor oppressed Christian bakers in Oregon were literally running for their persecuted lives, stopping only briefly to send cake-flavored care packages to LGBT groups to let them know they're going to burn in hell for all that evil buttsexing. All because the mean administrative judge at the Oregon Bureau of Labor and Industries told Aaron and Melissa Klein, of Sweet Cakes by Melissa, that they are not allowed to discriminate against same-sex couples, it is illegal and also super dickish, so pay the fuck up, for doing that.

T'would appear the Kleins have decided to not pay the fuck up, for doing that. Willamette Week reports that despite the July 2 order to pay $135,000 to the nice lesbian couple, Rachel and Laurel Bowman-Cryer, for whom they refused to bake a cake because Jesus, the Kleins have not yet gotten around to writing a check. Oh, sure, they found the time to hang out with their fellow outlaw martyr, Rowan County clerk Kim Davis, at last week's Values Voter Summit, weeping about how unfair it is that American laws apply to them. But that's different. Now they they have been financially holocausted by the homosexbians, they've gotta make their rounds on the Wingnut Welfare Circuit to keep the cash flowing, and if they have to give their hard-earned money to those same-sex scissorgals, well, BAD THINGS, according to legal counsel:

Their attorney twice requested a stay while the Oregon Court of Appeals considers the Klein's case, asserting payment would lead to "financial ruin."

BOLI Commissioner Brad Avakian rejected those requests—noting that the Kleins raised nearly $500,000 from crowd-funding sites and the money will be held in escrow during appeal.

Ohhhhh yeah. Didn't the Kleins rake in the bigot bucks on GoFundMe, before Satan himself intervened and shut that whole thing down? They did! And then they took their tale of woe to Samaritan Purse, which is like GoFundMe but for "persecuted Christians," where they raised even more money, just for being righteous dickheads in the name of their lord. Nice work if you can get it.

So they have a whole bunch of money they raised, supposedly to pay this burdensome fine, right? Right! But when prosecutor Jenn Gaddis emailed the Kleins' attorney to say, "Pay the fuck up," the Kleins' attorney emailed back, "No, fuck you and your mother and her college roommate."

"If we can come to agreement on the terms and conditions of a bond or irrevocable letter of credit," Gaddis wrote to the Kleins' attorneys in an Aug. 6 email, "the agency will stay collection of the emotional distress damages from your client."

"Our clients do not have a bond or irrevocable letter of credit in place and have no further plans to obtain one," Grey wrote.

Oh. So, the Kleins sob their story all over the world, about how destitute they are because of this fine they've been ordered to pay, but now that they are rollin' in dough (haha, get it? because bakers? dough? never mind), they've decided nah, they're just going to keep that money, thanks.

What's the end game here? Well, the Kleins' attorneys are begging every court in the land (even though we know judges have no authority over such matters) to please excuse Aaron and Melissa from obeying the law. It's worked out so well for Kim Davis, after all! And maybe some sympathetic judge will take their side, in which case, judges do have authority over such matters!

Or, if every single judge in the land tells the Kleins, "No, pay the fuck up," maybe Mike Huckabee will volunteer to pay the fuck up in their place. (Spoiler: LOL, yeah right.)

But here's what probably going to happen. If the Kleins keep disobeying the order, the state will impose a lien on their home, their cars, their collection of Bibles and sheet pans, and any other assets they have and then send some jackbooted thugs to seize all their crap and give it to those nice gay lesbians. Then the Kleins will do another round of whining about how unfair it is that the state wasn't kidding about its order to pay the fuck up, and maybe they'll get a book deal and a TV show and raise even more bigot cash to stash under their mattress, thank you Jesus!

But marriage equality will remain legal, discriminating against gays will remain not legal, and the Kleins will eventually get to enjoy that eternal hell they’re always on and on about, if there is such a place, for being terrible people. So everyone wins.