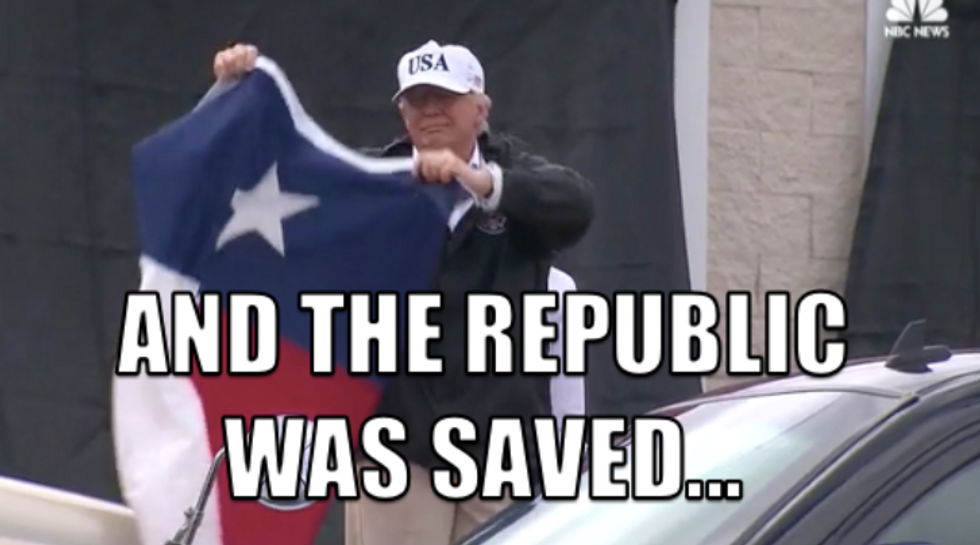 Another day, another HOLY SHIT STOP IT YOU'RE KILLING US presser from President Twitterfingers. Two actually, since he graced the people with his presence in Corpus Christi and Austin. Sure, Texas has a lot to deal with this week. But those Trump hats aren't gonna flog themselves!

Donnie and Melon's Excellent Adventure started in Corpus Christi, where he opened the festivities by ritually murdering irony. Here's a man named Donald marveling that a storm with a dumb name like Harvey could actually inflict real damage.

Trump on Hurricane Harvey: "Harvey. Sounds like such an innocent name, right? But it's not innocent." pic.twitter.com/RvG8gnNAeS

Haw Haw. See, it's funny because Trump is the storm, and America is the wreckage.

Okay. Maybe not so funny.

Here's a video of a bunch of arrogant dickbags huddled in a room thanking each other for being so good at disaster relief. The water was still rising 220 miles up the coast in Houston, but it was warm and dry for the Presidential Circle Jerk in Corpus Christi! Also, too, why is The Narcissist in Chief's placecard in gazillion-point font?

I also want to thank my people. Ben Carson, as you know, is here from HUD. And Linda McMahon from Small Business is ... I say, this is not small business, Linda, this is big business when you add it all up. You're going to be giving away many, many millions of dollars to help people out.

And here's the White House transcript of Trump's on-camera pow wow with all the bigwigs. See if you can spot the difference.

I want to thank my staff, my Cabinet. We have quite a few of our Cabinet here. You know Ben Carson, obviously, from HUD, and Tom Price and Linda McMahon -- Small Business. Small business, which is now big business, because when you add them all up you're going to be helping a lot of the people in Texas and doing a fantastic job. Thank you very much, Linda.

Gee, did someone at the White House notice that describing Linda McMahon as the great white mother giving away millions in aid like goddamn Eva Peron was not a good look? Or did they decide not to highlight the fact that regular Americans are crossing state lines with their fishing boats to rescue their fellow citizens stranded on roofs, and the Six Billion Dollar Cabinet is too busy thanking each other to write any personal checks? Or was it that those "many, many millions of dollars to help people out" has to come from tax revenue, and Republicans in Congress are focused right now on a massive tax cut for the super-rich?

See? Helpers. They really are the majority!

Hey, remember that time after Hurricane Katrina when Republican Congressman Mike Pence balked at allocating funds for clean up?

Remember when the majority of Republicans in the House and Senate voted against funding the relief for Hurricane Sandy? Good thing we can count on them to bail out Houston this time!

After Trump's very important meeting to personally save Texas, the president stepped outside where a few hundred screaming fans gathered to give Trump's ego the morning fluffer.

Thank you everyone! What a crowd! What a turnout!

Proving once again that life under Trump has converged with The Onion. Only yesterday Wonkette's own Evan Hurst gave Glenn Thrush THE BUSINESS for awarding Trump a Gentleman's C in Prezzynitting. All he had to do was show a little empathy and not brag about crowd size.

"What a crowd, what a turnout!" pic.twitter.com/I3X5RHqECY

Trump then assured his adoring fans that,

We love you. You're special. And we're here to take care. It's going well. I want to thank you for coming out. We're going to get you back and operating immediately.

And Corpus Christi probably will be back "operating immediately," since it didn't take a direct hit from the hurricane. Which is why it was safe for That Orange Idiot and his tacky wife to go there!

Didn't. Meet. With. Any. Victims. pic.twitter.com/ZHVy4oZBS8

Did he offer condolences to the families of the thirty people (we know of) who've died in the storm? NO. Did he express sympathy for the tens of thousands displaced and in shelters. NOPE. Did he encourage Americans to donate to support their fellow citizens? BITCH, PLEASE.

He congratulated FEMA and Texas Governor Greg Abbott, waved the Texas flag, and hauled his fat ass back onto the plane for another photo op in Austin at the Emergency Operations Center.

If anyone wants to compare it to the transcript, have at it. Right now we are TOO MAD.

It's a real team, and we want to do it better than ever before. We want to be looked at in five years, in ten years from now as this is the way to do it.

Meanwhile, they're cooking the planet which supercharged storms like Harvey, cutting funds for FEMA, and canceling flood standards for infrastructure. All so that big business can make more money and pay less in taxes.

We're a long way from knowing whether FEMA did a heckuva job in Texas. But this is the richest country in the world, and we shouldn't have to rely on teenagers in a goddamn fishing boat to rescue us!

AND WE ALL NEED TO PAY OUR FAIR FUCKING SHARE IN TAXES TO FUND A GOVERNMENT THAT CAN PROVIDE DISASTER RELIEF FOR ITS OWN CITIZENS.

15 yr old Declan and friends have been picking people up in Meyerland since late morning @HoustonChron#houstonfloodpic.twitter.com/fOh8lwXBzm

These kids deserve a hell of a lot more congratulations than Donald Trump and Linda McMahon! Yes, we are mad this morning. And the next person who starts talking shit about "kids today" is gonna get it! Do not fucking try us!