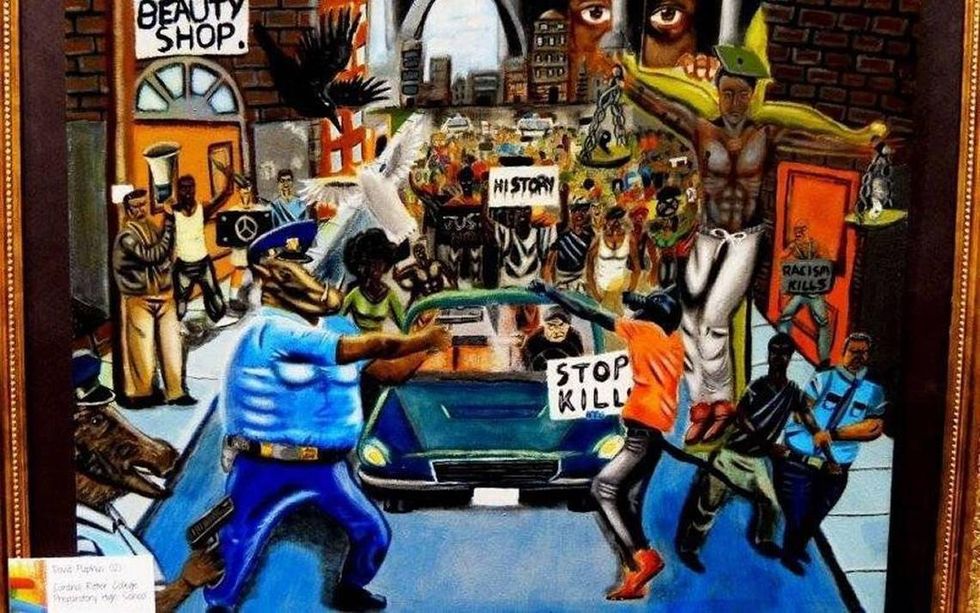 Apparently cops and Marines DO have a right to not be offended.

For the last week or so, conservatives have been having conniptions over a high school student's painting hanging in a hallway between the U.S. Capitol and congressional offices, because it hurts their feelings with an unflattering portrayal of police. The painting was submitted last spring by David Pulphus, then a high school senior, as part of the House of Representatives “Artistic Discovery” contest for high school artists, and was selected as a winner by Missouri Democrat Lacy Clay. Based on the 2014 protests in Ferguson, it depicts two cops as warthogs pointing guns at protesters while a black man is crucified on the scales of Justice. While it had been on display since May, the painting suddenly became far too offensive and dangerous for public consumption once Tucker Carlson's Internet Rage App ran a piece about it last week.

Thank the good Lord above, a brave member of Congress was willing to do something to protect America's law enforcement community from a high school student's polemic art, lest it inspire the murder of police officers. Rep. Duncan Hunter told Fox News all about his act of heroism:

“I was angry,” Rep. Duncan Hunter, R-Calif., told FoxNews.com. “I’ve seen the press [reporting] on this for about a week or so. … I’m in the Marine Corps. If you want it done, just call us.

Hunter said he walked over to the artwork Friday morning with a few colleagues and unscrewed it. He then delivered it to the office of Rep. Lacy Clay, D-Mo., the congressman whose office had allowed the piece to be displayed.

This is indeed educational! We thought the job of the USMC was to protect us from our military enemies, not from high schoolers' paintings. Thanks for clarifying that for us, Rep. Hunter! We do hope Rep. Hunter knows that one story about the atheist professor and the Marine is an urban legend, though.

Police groups around the country have been complaining about the painting for some time, including this impassioned train wreck of mixed metaphors from a blog post by the Association for Los Angeles Deputy Sheriffs:

Joe Patterson, President of the St. Louis County Police Association, said it best, "we are not about censorship, but good art and good taste are sometimes not the same thing. This is an extraordinarily disrespectful piece at a minimum. We in the law enforcement community have been continuing to work to build bridges and come to a better understanding with our minority community...and then we have irresponsible leadership from elected officials pouring gasoline on bridges haven't even finished being built yet. He's picking at these wounds that we're trying to heal."

Don't pour gasoline on that bridge scab! It'll get infected! Also, it's not about censorship, it's about demanding the government remove a work of art that police deem offensive, which is different somehow. Won't something be done about this runaway political correctness?

When he selected Pulphus's acrylic painting back in May, Rep. Clay saluted his young constituent's work as "a colorful landscape of symbolic characters representing social injustice, the tragic events in Ferguson, Missouri and the lingering elements of inequality in modern American society," which just goes to show how completely wrong Rep. Clay is, because after all, the painting is not flattering to police officers who put their lives on the line on a daily basis to protect the rights of scum like David Pulphus. Who therefore should not be allowed to have his art hanging in a government building, because LOGIC.

And what will happen next? Rep. Hunter told Fox News how Artistic Freedom works in America today: “Lacy can put it back up, I guess, if he wants to … but I’m allowed to take it down.” You know, we have a feeling he may not actually have that right. Call it a hunch. Then again, maybe this is how Freedom will be working from here on out. Trump won, you know, and you snowflakes had better stop bitching about it or you'll find out what happens. You do not have the right to not be offended, but cops and Republican congressmen do, OK?

Rep. Duncan Hunter had to pay back $60,000 worth of petty grifting from his campaign funds. He's being eyed for Trump's NSA.

In any case, this is certainly excellent publicity for Rep. Hunter, protector of cops from acrylics on canvas, who's been getting some bad press lately for his own outrageous use of campaign funds, like spending $600 to fly his family's pet rabbit in its very own seat on an airliner -- just a little mistake, his campaign insisted, as was the use of $1,300 in campaign funds to buy video games on the Steam network, which Hunter explains was a little goof that happened when his son somehow charged the games to the campaign account. These things happen! And that is why Duncan Hunter voted to gut the House Ethics Office that had made him pay back more than $60,000 of campaign funds he illegally spent!

Morning Maddow: So Many GOP Lies, So Much Rachel Debunking

But now, Duncan Hunter will be known as the brave Marine who took down a painting and saved countless cops' lives, instead of the dork who blew campaign funds on rabbit transit. But no matter what, in our hearts, we'll always think of him as the idiot who insisted on national TV that the Border Patrol had captured 10 ISIS operatives sneaking across the border, a story that miraculously disappeared because the lamestream media can't handle the truth. Funny, you'd have thought Homeland Security would have made a big deal over a catch like that.