Guess What, Iowa Cop Killer Was 'Troubled Loner.' There's A Lot Of Those! 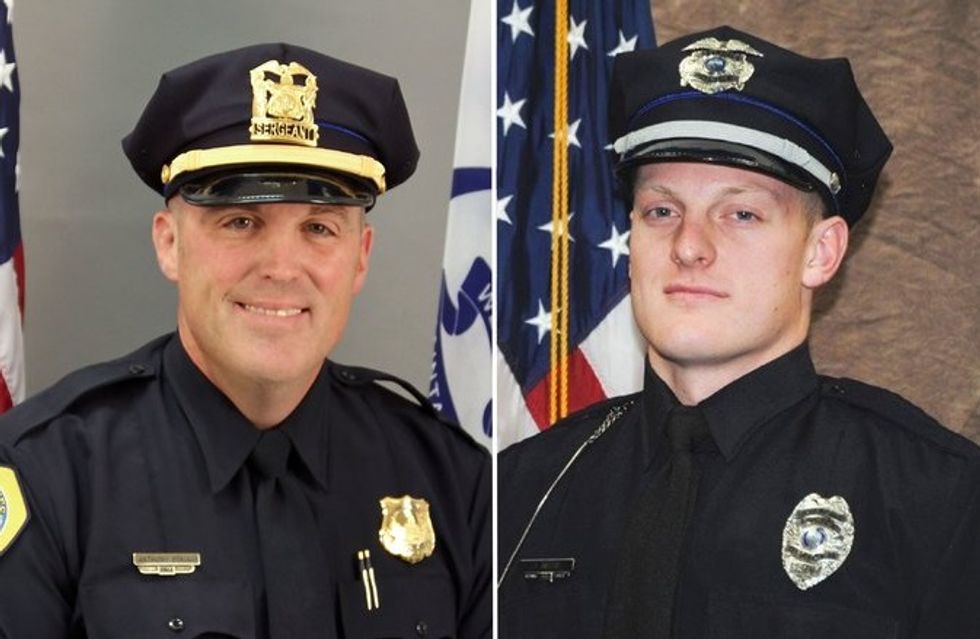 The New York Times has confirmed that Scott M. Greene, 46, the suspect in the murders of two police officers in the Des Moines, Iowa, area, was a "troubled loner" who was well-known to local law enforcement, and had had a number of "arrests and confrontations with officers and others, but nothing in his record approached the scale of violence that erupted" early Wednesday morning. Hours before the shootings, Greene had also been ordered by a court to move out of his mother's house in response to her allegations that he had emotionally and physically abused her. As we noted yesterday, in October, Greene was ejected from a high school football game after taunting black audience members and waving a Confederate flag at them because they hadn't stood for the National Anthem. The Times solemnly says,

But none of it added up to an explanation for the deadly assaults, said Sgt. Paul Parizek, a spokesman for the Des Moines Police Department, who added that the suspect appeared to have acted alone. “We may never actually know what motivated this act,” he said.

It doesn't appear that the ready availability of firearms to a severely disturbed man with repeated run-ins with the law was a factor, then.

The first shooting occurred at an intersection in front of the high school football stadium Greene had been ejected from; Urbandale Police chief Ross McCarty said Officer Justin Martin was shot while sitting in his car, and that the gunman had fired “over 15 and under 30” rounds into the patrol car. The ground was littered with .223-caliber shell casings; while the murder weapon has not yet been located, those are the caliber of the rounds most commonly used in AR-15 style semiautomatic rifles, as well as the Ruger Mini-14 semi-auto hunting rifle.

The second officer, Sgt. Anthony Beminio of the Des Moines Police, was killed in a similar fashion about a mile and a half away.

“It doesn’t look like there was an exchange of conversation; there definitely wasn’t an opportunity for these officers to defend themselves,” Sergeant Parizek said.

The same day that Greene was asked to leave the football game, police had been called to the home of Greene's mother, Patricia Ann Greene, to deal with a domestic dispute in which Greene accused his mother of hitting him and grabbing him by a necklace. A few days later, his mother asked for a protection order against Greene, whom she accused of abuse and financial exploitation. Greene was ordered to move out and to pay his mother $10,000, which he seemed unlikely to be able to do, since he had recently quit two jobs he'd held at hardware stores so he could look for full-time work.

Greene also had a number of arrests for acts of petty assholery, such as resisting cops' attempts to pat him down for weapons on one occasion, and other nice things:

He was “known to go armed,” the police report stated, and was “noncompliant, hostile, combative and made furtive movements towards his pockets.” He fought with officers, who used a Taser to subdue and arrest him.

Just two days later, he was arrested again and charged with harassment, accused of approaching a man in an Urbandale parking lot, shining a flashlight at him, threatening to kill him and using a racial slur. He pleaded guilty to misdemeanors in both cases and was fined and given probation.

Greene had also suffered a number of personal reverses, including the death of his father and a divorce; reports that he was an Iraq or Afghanistan veteran were not true, however -- he'd been in the Army from 1989 to 1993 but never in a combat area.

Chief McCarty told reporters "Most of our officers have some understanding of Mr. Greene [...] They’ve taken trips to his house or delivered service to him." Gotta love the Cop Talk.

As far as motives beyond pure horribleness, the Des Moines Register reports

Oh, the WingnuttoSphere should have a field day with that, although it's also worth noting the Greene house has a "Trump-Pence" campaign sign in the front yard. The Register story also has a more detailed account of the October domestic dispute between Greene and his mother, who grabbed a necklace holding set of dog tags belonging to Greene's late father and reportedly said "You don’t deserve these," according to the police complaint.

Stalkers And Domestic Abusers Aren't Allowed To Have Guns, Unfair!

Sort of makes you wonder whether it's a great idea to let people under protection orders have guns, doesn't it? No, it doesn't make anyone wonder that -- far too soon to politicize this regrettable tragedy. Besides, he might have terrorist ties!