Guess Which Trumpers Were Boning, And Now One's Bein' Crazy And One's Out Of A Job? 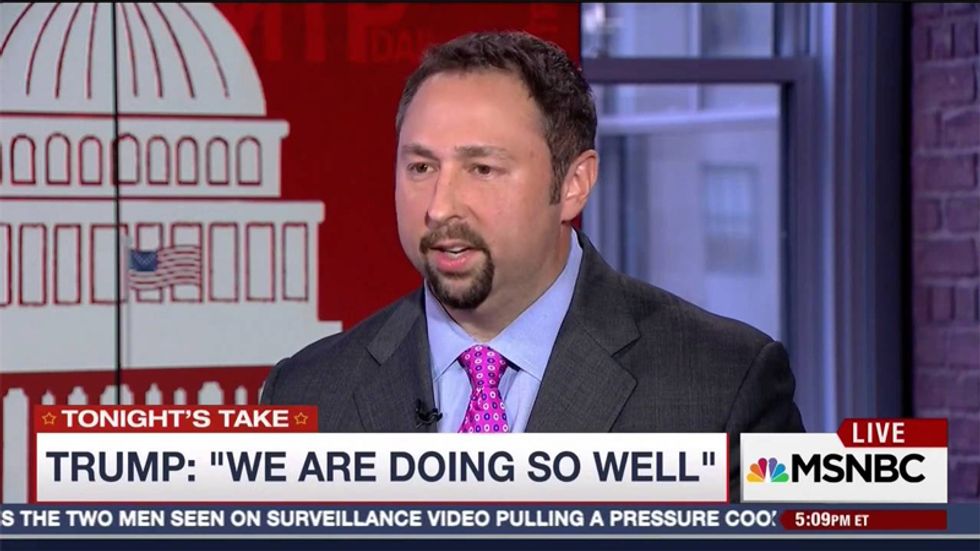 Hope for all of us: At least two women found that face sexy

Jason Miller, the Trump campaign spokestwerp who always surprised us by not being every bit as fictional as "John Miller," decided this weekend he'd rather not have the job of White House communications director after all, possibly because he felt he wasn't worthy of serving the new King. Or possibly because he's been sexxing someone who isn't his wife -- since unlike screwing people out of their homes or money, that's still not acceptable in the GOP. Miller, who had just been named to the White House post December 22, issued a statement Christmas Eve that explained his decision in exhaustive terms:

After spending this past week with my family, the most amount of time I have been able to spend with them since March 2015, it is clear they need to be my top priority right now [... ] I need to put them in front of my career.

"And also in front of my wandering penis," the statement did not continue.

But Wonkette, you are asking, why would anyone think Miller was doing sexxytimes with anyone? Well, we answer, it is probably because of all the Tweets from A.J. Delgado, who was one of the most entertainingly unhinged Trumplings on the political talk TV circuit during the campaign. Thursday, when Miller's appointment to the Communications Director job was announced, Delgado tweeted this "cryptic" little note:

Then Thursday evening, Delgado got a little teasier, suggesting Miller had a lot in common with John Edwards, and probably not because Miller ever gave any speeches about there being two Americas due to the wealth gap:

(We've re-arranged these in chronological order)

Delgado, who has since deleted her Twitter account for some reason (probably boredom, a lot of people just get tired of the thing), hasn't replied to media attempts to get her to explain the Tweets. Then, on Saturday, a whole bunch of "cryptic" Tweets before Delgado sent her Twitter account down the memory hole:

Miller, for his part, wasn't going into any more detail either, emailing the Daily Beast in response to a request for comment, "Not going beyond my earlier statement, but thank you for reaching out." That was awfully nice of him! The White House communications director job is now expected to go to Sean "Twilight Sparkle said the same thing" Spicer, who had previously been tapped to be Trump's White House press secretary. Hey, one last chance for Alex Jones.

Little Girl Hillary Clinton Punched Kid In Nose For Endangering Baby Bunnies. What A B!

Hillary Clinton: Mess with her animal friends, and she'll mess you up.

Yr Wonkette's attempts to determine whether the family's pet rabbit is OK have been completely unsuccessful. Judging by her appearances on MSNBC, Delgado strikes us as a potential bunny boiler. And if Chris Hayes asks her about boiling the bunny, she'll reply by asking why nobody ever made a big deal about that time Hillary Clinton punched a child in the face in a dispute over a rabbit, which just goes to show how biased the media is.

Oh, and for what it's worth, the gossip mavens at Page Six reported in October that the night before Trump's third and final debate with Hillary Clinton, Miller, Delgado, and a third Trump staffer went to a strip club in Las Vegas with several members of the media. Not that anyone would have found that particularly unusual at the time. Oops, looks like maybe whatever happened didn't stay in Vegas.

Also, also, too, several folks, including Yr Wonkette's Evan Hurst in the Sekrit Chatcave, have noted that the Miller-Delgado news (if any, allegedly) puts a new spin on Kellyanne Conway's recent remarks that she won't have any trouble managing her work-life balance when she takes a West Wing job, since "I don’t play golf and I don’t have a mistress, so I have a lot of time that these other men don’t." Huh!

The Trump administration is going to be pure hell for anyone who's not in the One Percent, but at least it should be a source of consistently entertaining leaks and, eventually, some flamingly mean tell-all memoirs. So things will balance out, no?