Guess Who Else In Trumpland Is A Fake Billionaire? Why, It's WILBUR ROSS!!! 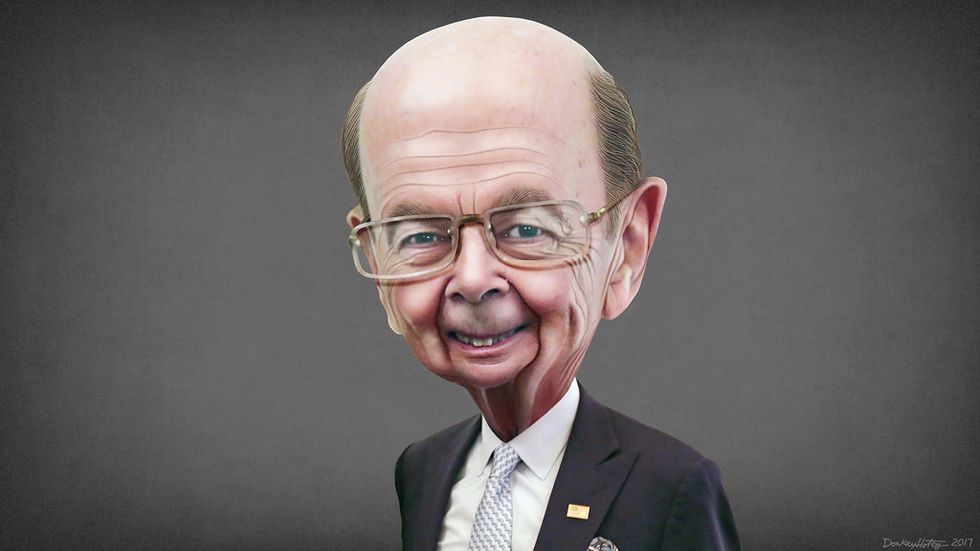 OH, NOES!!! SOMEONE IN TRUMPLAND IS A LYIN' ASS FRAUDSTER??? FETCH ME MY SMELLING SALTS!!!

Today Forbes broke the story of Wilbur Ross and his made-up billions. Apparently, the Commerce Secretary is just a penurious $700 millionaire. SAD!

This year, when Commerce Secretary Wilbur Ross filled out those financial disclosures so he could be a Very Serious Businessman in Trump's Cabinet, he listed assets of just $700 million. Which is a giant mountain of money, but not enough to keep him on the list of Americans who have sucked up all the wealth to leave the bottom 10% of the country in abject poverty. Well, Forbes calls it The Forbes 400, which has a better ring to it. And apparently Ross was deeply annoyed to be booted off the list, since last year Forbes estimated his penis size at $2.9 billion.

Ross protested, citing trusts for his family that he said he did not have to disclose in federal filings. "You're apparently not counting those, which are more than $2 billion," he said. When asked for documentation, the 79-year-old demurred, citing "privacy issues." Told that Forbes nonetheless planned to remove him from the list for the first time in 13 years, he responded: "As long as you explain that the reason is that assets were put into trust, I'm fine with that." And when did he make the transfer that allowed him to not disclose over $2 billion? "Between the election and the nomination."

It's always the stupid lies with these people! You can't tell a financial reporter, "Last year, I moved $2 billion dollars into a trust for the benefit of my family, but I still own it so you have to count it toward my balance sheet," without expecting a follow-up question. Leaving aside the obvious bullshit about giving it away and still owning it, Ross would have had to come up with $800 million in cash for Uncle Sam to pay the gift tax on a transfer that large. Also, too the guy is 79 -- his kids would get the money tax-free if the estate tax were actually repealed like Trump promised. No actual billionaire would be stupid enough to throw away $800 million. The whole thing made NO SENSE.

So, after Forbes started writing about this supposed ten-figure transaction with no paper trail, the Department of Commerce called them out for being FAKE NEWS.

Contrary to the report in Forbes, there was no major asset transfer to a trust in the period between the election and Secretary Ross's confirmation.

Which is just perfect considering it was the Secretary of Commerce himself who told them the lie about the $2 billion trust in the first place!

You see, the REAL surprise is that ... THERE NEVER WAS ANY TWO BILLION DOLLARS!

And after one month of digging, Forbes is confident it has found the answer: That money never existed. It seems clear that Ross lied to us, the latest in an apparent sequence of fibs, exaggerations, omissions, fabrications and whoppers that have been going on with Forbes since 2004.

Well done with your month of digging, Forbes. You ferreted out the ferret-faced liar! EXCEPT, the story of Ross's billions got started in 2004 because one of your reporters mistakenly treated the money he was managing for other people as a personal asset.

Ross was technically the beneficial owner of nearly $1 billion worth of the stock. But most of that belonged to his investors, not Ross personally. [...]

"I told him we're going to start him at $1 billion," added the reporter, who no longer works at Forbes. "And he said 'Yep, fine, thank you.'"

Ross appeared on The Forbes 400 for the first time in 2004, with a net worth listed at $1 billion. It was nearly four times as much as he was likely worth.

So, you guys can stand there with your hands on your hips huffing about Ross's "fibs, exaggerations, omissions, fabrications and whoppers" all you like, but you were the ones who fucked up the math in the first place. And you've largely repeated that error for twelve straight years. So maybe Ross wasn't so crazy to think that Forbes would swallow that bullshit about the $2 billion trust -- you've fallen for it every other time.

Naturally the Secretary is handling the disclosure in classic party-of-personal-responsibility style, as this statement from Commerce makes clear:

As we have said before, any misunderstanding from your previous conversation with Secretary Ross is unfortunate.

But this story is about a lot more than Wilbur Ross conning some overly credulous reporter from Forbes. Having bullshitted his way onto the Forbes 400 list, Ross basked in the free publicity of being a self-made "billionaire." Suddenly, he could easily raise billions for his private equity fund.

The more money Ross appeared to be worth, the more money investors seemed willing to give him. "Really, for us, it was a bet on him, " says Sam Green, who helped put $300 million into Ross' funds on behalf of the Oregon Public Employees Retirement Fund, citing his personal wealth as one factor. "I don't know of any better indicator of future success than having been successful in the past."

In 2007, Ross's net worth was probably $400 million, but he raised $1.7 billion in private investment based partly on his insistence that he was worth $2.75 billion. And yeah yeah, cry me a river over bazillionaires getting tricked into investing with a guy who inflated his assets by 600%. But lying about your credentials is a fraud on the market itself. Ross got money and special treatment from banks BECAUSE HE LIED. It's a theft from ethical people who made an honest disclosure of their assets and couldn't access that capital.

There's a lot more about Wilbur Ross being a liar-fucking-liar in Forbes's excellent article. And we haven't yet managed to digest whatever crony capitalist deal he's got going with Russia. But in any sane administration, Ross would have submitted his resignation three weeks ago when it was clear that the decade-long scam was going to come out. Today in Trumpland, it barely rates a news cycle.

Thoughts and prayers for the country, y'all.

Wonkers, this week is going to be bananas! Please put some fruit in our bowl. And if it's your day to go to the polls, VOTE!