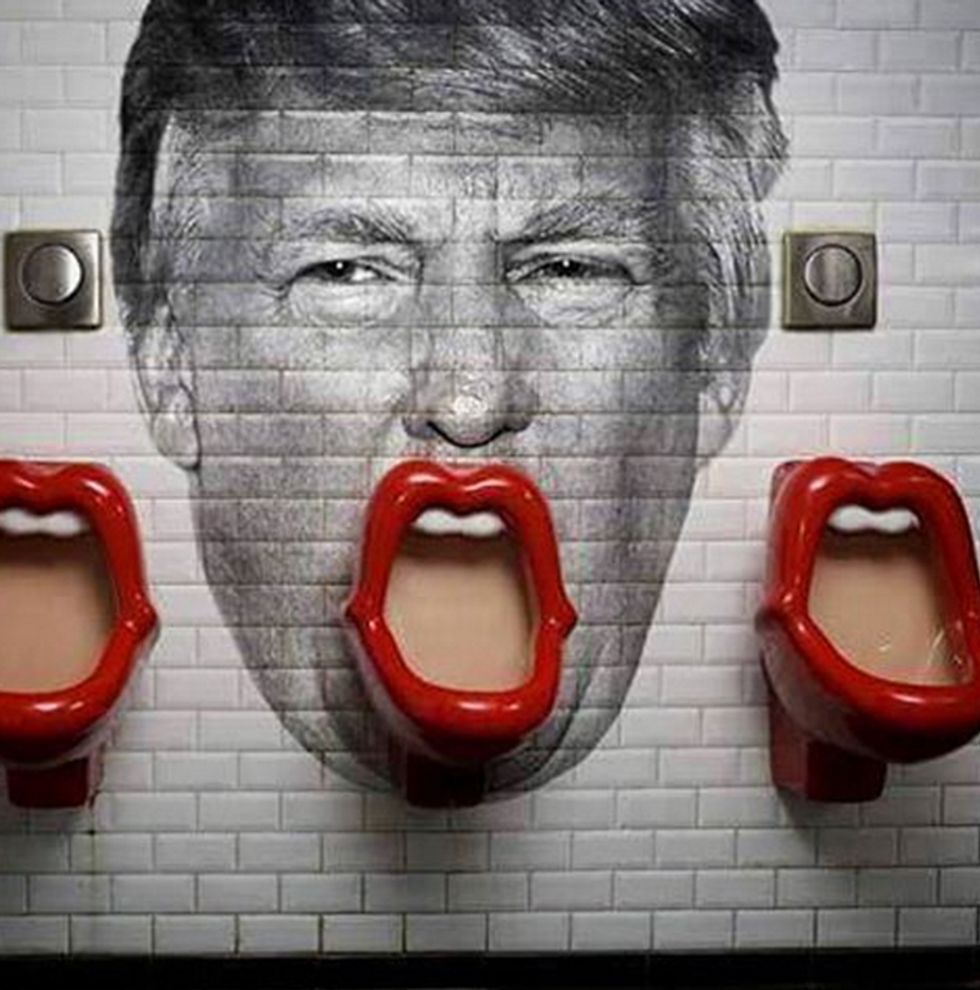 Oh, heck, that one's still being used in Paris.

Donald Trump may not be able to get a Van Gogh to hang in the White House, but at least one brave soul in the art world is willing to give him a pot to pee in. When the White House requested a painting by the French Impressionist to hang in Donald and Melania's residence upstairs, possibly so the First Lady could see a rectangle that wasn't goddamn Fox News for a change, the Guggenheim's chief curator, Nancy Spector, replied that wouldn't be possible. But another major work that recently came off public display would be available, with the artist's compliments even:

The curator’s alternative: an 18-karat, fully functioning, solid gold toilet — an interactive work titled “America” that critics have described as pointed satire aimed at the excess of wealth in this country.

For a year, the Guggenheim had exhibited “America” — the creation of contemporary artist Maurizio Cattelan — in a public restroom on the museum’s fifth floor for visitors to use.

Turns out the art world is part of the Deep State. Whoever made the request -- probably not Trump himself, whose only interest in art is having a marquee name -- had wanted Van Gogh's 1888 “Landscape With Snow.” Instead, he was offered a shithole. A very, very nice shithole.

Spector's email was at least very gracious, noting that the artist "would like to offer it to the White House for a long-term loan," and keying in on what might matter most to Trump:

It is, of course, extremely valuable and somewhat fragile, but we would provide all the instructions for its installation and care.

A Guggenheim spokesperson confirmed that Spector had indeed sent the email, back on September 15, but added that Spector wouldn't be available for comment. That's fair, we think, because art should speak for itself. Sometimes with a deep gurgly whoosh.

The artist, Maurizio Cattelan, told the Washington Post that all questions would need to go to the Guggenheim,

saying with a chuckle, “It’s a very delicate subject.” Asked to explain the meaning of his creation and why he offered it to the Trumps, he said: “What’s the point of our life? Everything seems absurd until we die and then it makes sense.”

How true this is. Whether you're a peasant with a bowl of rice or a pretend billionaire with a burned steak slathered with ketchup, life chews us up and shits us out into the Great Whatever, doesn't it. That was, after all, the terrible secret Snowden (the bombardier, not the NSA guy) had for Yossarian: Man is matter, and our guts need to stay on the inside. A worthy message for a man who puts his spleen on the internet twice a day as he moves his bowels.

Cattelan declined to say how much the gold needed to construct "America" cost, although experts say it probably was around a million dollars worth. That's a lot of green dresses (but not a real green dress, that's cruel). He then cut the interview short, apparently without the most important details: Could the golden throne handle the weight of a "president" who weighs "239-pounds"?

The Post delicately notes that Trump is a "a self-described germaphobe," so he might not be willing to perch himself on a used toilet, even if it's made of 18-carat gold.

Catellan has said that he'd conceived of "America" long before Trump ran for president, so the proffered loan to the White House seems more a matter of using what's on hand, as it were, than an intentional homage.

Trump supporters were, as they tend to be, outraged. Boris Epshteyn, the guy who used to have a White House comms job no one could really explain, took to the Twitters to insist no art gallery would have dared insult Barack Obama so:

That's probably true, which is why Tea Partiers had to make their own chimpanzee and Witch Doctor offerings. Fox Business shitferbrains Stuart Varney also made a huge stink over the thing, because the Guggenheim had not merely insulted the Trumps, but indeed the entire nation, and probably the troops, too:

He called for Spector to resign, and you'd better bet Trump fans across the nation will be boycotting the Guggenheim like anything, now, just as they stayed away in droves from Shakespeare plays.

There's a great tradition of terlet-based art, of course, from Marcel Duchamp's "Fountain" -- a urinal, signed "R Mutt 1917" and entered for an art show -- to Piero Manzoni's 1961 conceptual project in which he canned his own poo and sold it as "Artist's Shit":

Donald Trump's own taste in art is much like his taste in everything: He may not know art, but he knows what he can brag about. He has often bragged about his "original Renoir," which he had displayed in one of his jets and now apparently keeps in Trump Tower. Despite all the times he's been told that it has to be a copy, since the original hangs in the Art Institute of Chicago, he insists it's real. Just look at the signature, he tells people.

It appears that Trump didn't take the Guggenheim up on the offer to let him take a shit every day on "America," although we're certain he gave it at least some thought. After all, we're supposed to have so much winning that we'll be flush with success.

In an unrelated story, Lucasfilm Ltd. had to explain to Mr. Trump that C-3PO is a fictional character, and no, Trump can't have him to work as a butler.