Gun Humpers Fight For Their Right To Shoot Up All The Polling Places, For Freedom 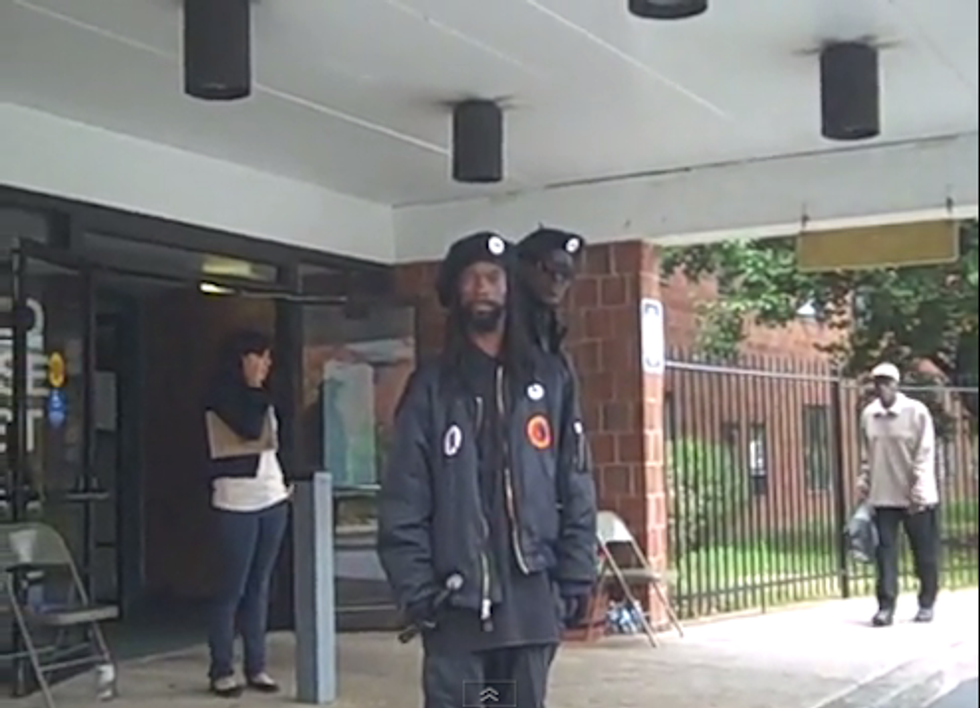 Remember when history's greatest and most pervasive monsters, the New Black Panther Party, showed up with a whopping two dudes or so in Philly in 2008 and stood around intimidating little old white ladies by holding doors open for them and everyone over at The Daily Blaze Glenn Caller Beck Show whined all the whines in the world? We'd so like to line up those crybabies to chat a wee bit about yesterday's voting in Alabama, which was basically nothing but GunNutPalooza, with living stereotypes demanding to tote their guns from the pickup truck to the voting booth like Jesus and America said they could, and then wailing SO HARD if they couldn't.

First up, beautiful (maybe? fuck if we know) Chambers County, where "a couple" people cried to the sheriff's department about how if they couldn't bring guns to the polling place, the world would spin off its axis, which prompted the sheriff's office to issue this really clear clarification.

After receiving a couple complaints about the firearm prohibition at polling places, Sheriff Sid Lockhart and Judge Brandy Clark Easlick met and reviewed the source. A memo was sent out by the Alabama Sheriff's Association stating that Probate Judges should post these notices in accordance with 13A-11-61.2(6)(C) Code of Alabama. After reviewing this statute, Sheriff Lockhart and Judge Easlick were in agreement that this statute did not apply to polling places. They have ordered that the signs and restrictions be removed. However, voters are reminded that no weapons are allowed in the Courthouse or schools. We apologize for any inconvenience that may have caused.

Thanks for that information, Chambers County. We think we can now bring our guns to polling places that aren't schools or the court. Or maybe we can bring our guns everywhere? Or nowhere? We'll probably just bring a gun. Or two. Or ten.

Didja vote in a church? Prolly shoulda brought your gun.

This afternoon in Pelham, a report surfaced of a man wearing a shirt that stated "Bama Carry" wanting to bring a firearm into the Pelham First Baptist Church Annex on U.S. Highway 31. The man had a camera phone displayed and was recording his experience, a witness told AL.com.

Also, we know you are all Rambo and shit, but you honest to god do not need the extra clip, big shooter.

John David Murphy wore his holstered 9 mm handgun and two ammunition clips into First United Methodist Church of Alabaster when he went to vote in the Republican primary Tuesday.

The church, like other precincts, had a sign in the door saying firearms are prohibited. But Murphy argued with a poll worker that his constitutional right to openly carry a weapon trumps a state law allowing guns in public places unless a sign is posted.

So wait. Jesus says he doesn't like your guns, but 'Merica needs you to have all the guns, all the time. Who do you believe?

Fuck it. We believe in America. We're just gonna buy a gun every day until November so that we're totally ready for the midterm elections.