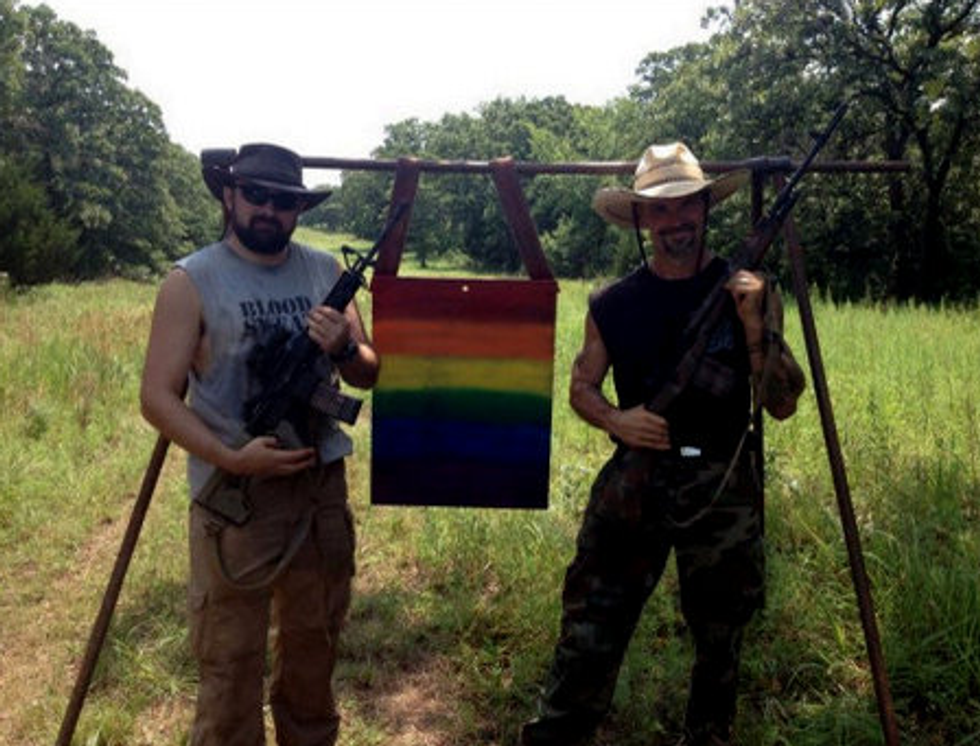 What's the world coming to when you're a "fitness and liberty" group that's just trying to organize a "Run 'n Gun," which is apparently some kind of race that involves guns (SOUNDS REAL SAFE), and you can't even post a hilarious picture of two gun-fondling guys standing next to a rainbow flag, advertising "new high visibility targets"? Gah, nobody can take a FUNNY JOKE anymore, can they? Here's the pic, we post, you decide:

Apparently, in the gay mecca that is Oklahoma, some people took the posting as a threat:

“Since it said our new target and it had guns that I took it as a threat,” said human rights activist, Mahkesha Hogg.

“I think for many gay men and women in the state of Oklahoma, we feel as if we walk around as targets,” said Scott J. Hamilton, an advocate for the LGBT community.

But the organization itself, to be completely fair, says it really didn't mean for people to think they wanted to use gay flags or gay human beings as targets, they are just very bad at jokes:

Event organizers say they did not expect the response they got and that it was all meant as a joke. [...]

The race organizer tells NewsChannel 4 some people had been complaining about not being able to see the targets, so this was their response … a brightly colored one.

The picture is no longer on the group's Facebook page. So what was this? An innocent group of gun humpers who like to strap numbers on their backs and run across the prairie firing guns in the air like Yosemite Sam, and who don't realize that gay jokes aren't really funny anymore? (Unless they are. Sometimes they are. But they have to be GOOD, and this was not one of those cases. Eat me, social justice warriors.) Or do these people really hate the gays deep down, and find it maddening that those dumb queers are fuckin' up errthing they hold dear, YET AGAIN, up to and including their special Gun Run Fun?

But if the group is truly looking for bright, colorful targets for shootin' at, things which don't represent good nice Americans who have been discriminated against, here are some other things that have colors on them:

Now you kids go have a fun race and don't let nobody get hurt!