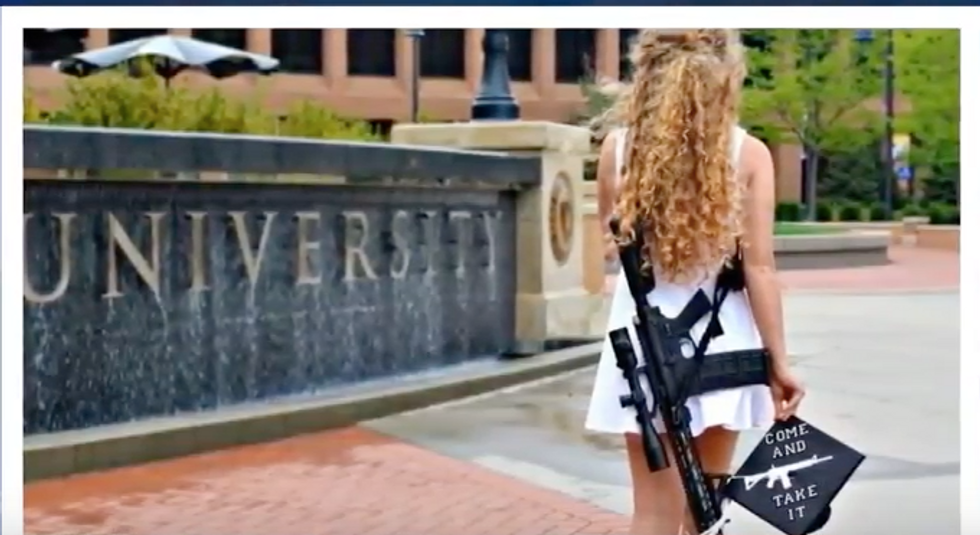 The 15 minutes for Kaitlin Bennett started ticking once she decided to pose for her Kent State graduation photos with an AR-10 death machine strapped to her back like someone unfortunate enough to live in a war zone or desperate enough to crave attention no matter how silly it makes you look:

To Bennett, the photo was the culmination of her years as a conservative student activist, during which she advocated for students to be able to carry concealed weapons on the same campus where, almost 50 years ago, the Ohio National Guard opened fire into a crowd of unarmed students protesting the Vietnam War, killing four and wounding nine.

“I believe that if the government has it, we should have it. Machine guns — any weaponry,” Bennett told The Washington Post on Tuesday afternoon, shortly after her graduation photo accumulated 3,200 retweets (a stat that has since climbed to 4,500 retweets and more than 18,000 likes).

The notion that the average Netflix-binging citizen should have access to any weapon the government has -- machine guns, tanks, freakin' nuclear weapons -- doesn't exactly demonstrate that Bennett is a serious person with even a tenuous grasp of serious issues. More annoying is that Bennett pulled her stunt in Ohio, where a black man was killed in a Walmart for possession of a BB gun and a black child playing with a toy gun was shot down in seconds in a public park. When Bennett accessorizes with an AR-10 almost as large as she is, she's not making a statement about the rights of gun ownership but rather the blinding privilege of whiteness.

Bennett popped up in the news again this week when she pulled a Laura Ingraham and decided to go after David Hogg, who is actually trying to do something with his life. Four months ago, Hogg survived a school shooting that left 14 of his classmates dead and more wounded. He has since advocated for sensible gun control laws because a gun is suspected to have been involved. Now dig how the former Turning Point USA president chose to initiate a discussion on the merits of the second amendment.

I have a challenge for you @davidhogg111. Let's arm wrestle. If I win, we get to keep the 2nd amendment. If you win, we turn in our guns. Deal?

This isn't as absurd as it seems. It's actually legally binding due to a seldom-discussed clause in the Constitution. It's why I never arm wrestle because I love my black people too much to risk the 13th amendment. Hogg didn't immediately take up Bennett on her wackadoodle offer because he had other stuff going on at the time. He also is under the impression that non-violent debate is a better avenue for change than Andy Kaufman-type stunts.

Bennett then upped the ante with that schoolyard bully cruelty the right wing loves so much these days.

Catch me on @NRATV this morning talking about my challenge to @davidhogg111 to arm wrestle over the fate of the 2nd amendment. Think twig arms will tune in? pic.twitter.com/yo7Y1qBED1

"Twig arms"? Really? Where did Bennett get the idea that insulting your political opponents with juvenile nicknames was in any way normal adult behavior?

What is taking so long with the Inspector General’s Report on Crooked Hillary and Slippery James Comey. Numerous delays. Hope Report is not being changed and made weaker! There are so many horrible things to tell, the public has the right to know. Transparency!

Sure, but that's just the president of the United States. I said normal adult behavior. Man, if someone ever publicly mocked my appearance like that, they darn well better pose threateningly with an AR-10 next to my photo so I could totally let it pass because this person might not be all there.

The "arm wrestling" angle itself is weird. It's as if Bennett got all her ideas on conflict resolution from the 1980s "Thundercats" cartoon, in which case I'm glad to see Millennials taking an appreciation for the classics.

Still ignored, still desperate for attention, Bennett kept at it like a bad standup comic bombing during last call on open mic night:

Look, she's going to arm wrestle somebody. The fate of the nation is at stake.

Bennett's 15 minutes are close to over, but she'll at least have that "participation trophy" in the Adult Conversation Olympics.

Wonkette can't arm wrestle all our readers into supporting us, so please do so voluntarily.