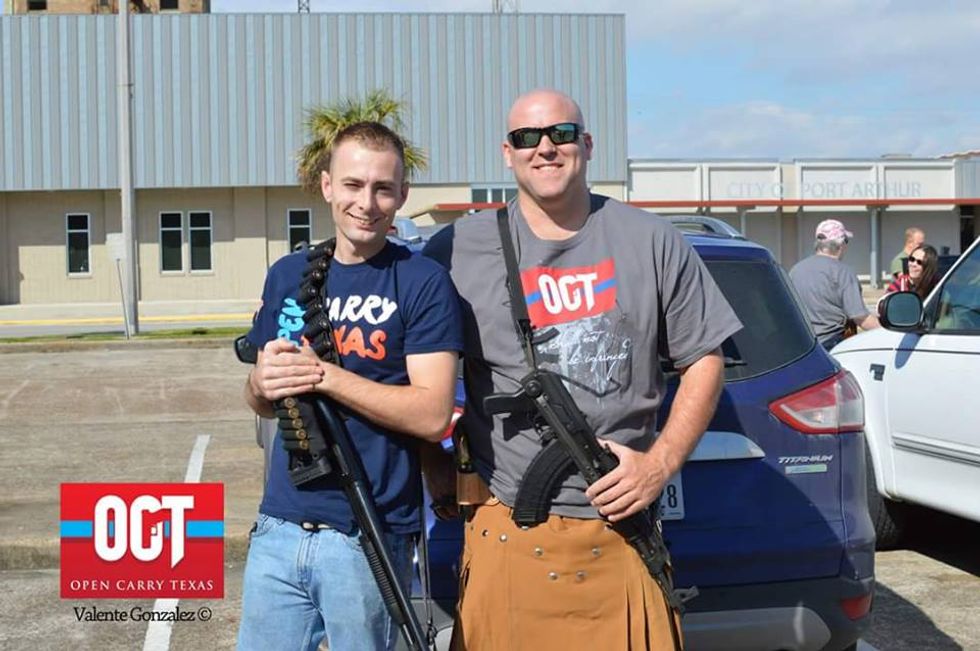 More evidence that open carry is in the Napoleon-in-Russia phase of its campaign for gun rights most people never asked for and don't want: a now-deleted tweet from prominent Texas open carry nut and alleged airline pilot Eric Reed:

How's that month-old frozen horse meat tasting today, Eric? (Astute readers may recognize one Robert J. "Raging Rob" Kinnison in the reply. He's the guy who likes to tell people to put dicks in their mouths and shut up.)

But surely Shannon Watts did something terrible to deserve such treatment, right? She sure did! She disagrees with them on gun control!

Shannon is the head of Moms Demand Action For Gun Sense in America. Moms Demand Action uses a kill-them-with-kindness approach to advocacy; for example, on the same day that open carry advocates accosted and threatened ("Your days are numbered, bro") Texas lawmakers who wouldn't vote their way on a "constitutional carry" bill, the Moms did a little lobbying of their own -- with baskets of cookies. This has the effect of drawing a contrast between open carry groups and their opponents that is not flattering to the former.

And it looks like it's working: Texas's Lt. Gov. Dan Patrick does not think the "constitutional carry" bill favored by the gunners is going to pass. So naturally they threatened him too:

"I'm coming to his office Thursday. Tell them to get the panic buttons ready," Kory Watkins, the head of Open Carry Tarrant County, posted on Facebook, referring to a rule approved by the House earlier this month allowing lawmakers to bill the state to install panic buttons after Watkins and fellow members from the group confronted Rep. Poncho Nevarez in his Capitol office.

We are seriously starting to suspect that many prominent gun rights maximalists are actually double agents employed by gun control groups to make pro-gunners look crazy and dangerous. Like, actually seriously! If George Soros and Mike Bloomberg aren't already slipping these guys bundles of cash under old railroad bridges, that's a missed opportunity for all concerned.

Or maybe we are just making the old mistake of assuming people are sensible enough not to doggedly pursue a strategy that very clearly makes their objectives harder to achieve? Gotta be one or the other though, right?

The main reason it's hard to make sense of these gun rights extremists is that their brains seem to work different from what we're used to. Like, imagine you have what you think is a great idea. But when you share your great idea with the world, most people give you feedback like "your idea makes no sense," "your idea scares us," and "all available evidence shows that doing your idea will kill many more people than not doing your idea." What do you do? You probably don't threaten the people who disagree with you, right? Because you realize that makes you look like an actual crazy person, right? And then -- guess what -- you lose!

In lieu of provable facts, gun freedom maximalists like to use quotes by dead people to support their views. One such popular quip is "An armed society is a polite society." Except:

Huh, weird! You wouldn't think the word "cunt" would be so commonly used in polite society.

BONUS: Here is your EXCLUSIVE MUST CREDIT WONKETTE statement on all this bullshit from the excellent Shannon Watts, re: the squalling gunbabies:

"I receive threats like this from gun extremists on a daily basis, and so do a number of our mom volunteers. It's just a childish attempt to intimidate the hundreds of thousands of moms who have come together to fight back against a gun lobby that has bullied our lawmakers for years.

It actually really helps me connect with my eighth grader--online bullying is a common tactic employed by middle schoolers.

These gun extremists are grossly underestimating the power and courage of American moms—we are not afraid and we will not back down.”

This is a good statement, if a bit unfair to eighth graders. Stay safe out there, Moms!