Gwen Ifill In Heaven, Politely Interrupting All The Angels 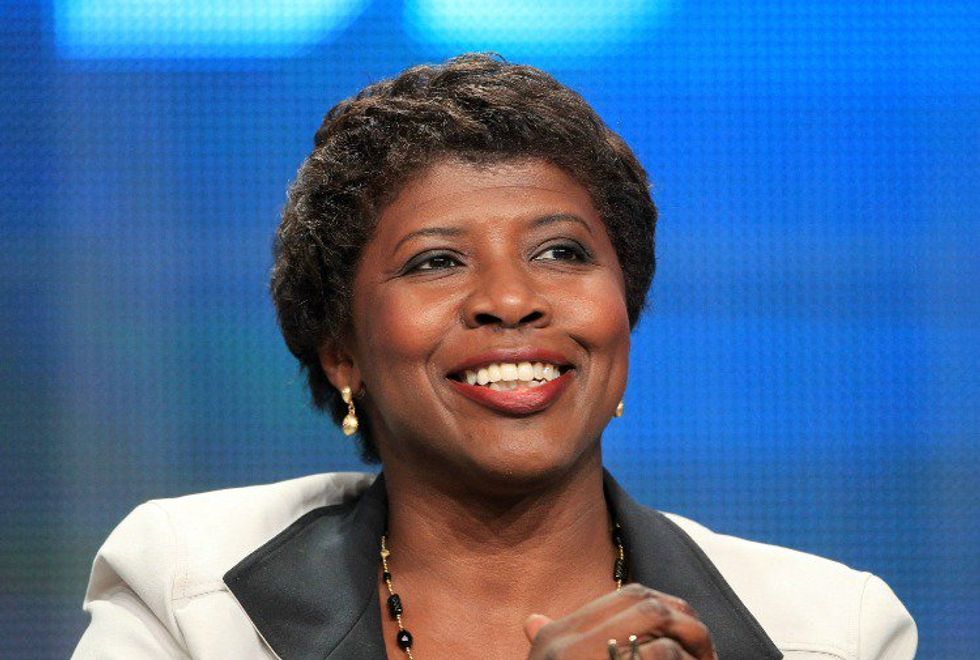 As if we didn't have enough awfulness in the world, Gwen Ifill died Monday of cancer at a hospice in Washington DC. For chrissake. In addition to hosting PBS's "Washington Week," Ifill co-hosted the network's "PBS News Hour" with Judy Woodruff after Robert McNeil and Jim Lehrer retired. The Universe, having recently had a good rueful laugh over Americans' choice of a president, issued a statement reading "Yeah, we never said it was fair. Any of it."

Woodruff called Ms. Ifill a consummate communicator who exuded “the rare combination of authority and warmth. She came through the screen as a friend to people who watched her, but she also displayed the authority for people to believe you, to have credibility.”

In addition, Woodruff said, “She didn’t mind telling anyone when she thought they were wrong, on camera. She kept it respectful. She was one of the most graceful interrupters I have ever seen.”

Ifill was the among the first African American journalists to host a major network talking-heads show, hosting Washington Week since 1999. We remember her as a smart, sharp interviewer who didn't put up with David Broder's shit. (It's possible our memory of David Broder is fuzzier, however.) Around Wonkette, she's fondly remembered for having given a wrong answer to a contestant on "Who Wants To Be A Millionaire?" which probably saved the contestant from a life of frivolous spending and debauchery. In 2008, wingnuts had a big old hissy fit that Ifill would be moderating the vice-presidential debate, since Ifill had proven herself utterly incapable of being fair by writing a book about black politicians, one of whom was Barack Black Hussein Muslim Also Black Obama, which would be published months after the debate. The nerve of that woman! As it turned out, Palin somehow managed to make herself look like A Idiot all on her ownself, without any help from Ifill. We weren't quite sure how Woodruff and Ifill were handed a bunch of Fox News's questions about the national debt and the size of the deficit for the Democratic debate when they moderated a Democratic primary debate this year, though. It may have been performance art.

Ifill wanted to be a reporter from childhood, and got her start in print reporting, eventually working for the Washington Post and New York Times before moving to NBC News in 1994; of the move to TV, Ifill said in a 2011 interview,

"I was very conscious of the world being this very crazed place that demanded explanation [...] I didn’t see a whole lot of people who looked like me doing it on television,” she added, but “you get used to being underestimated.”

As ever, the New York Times obit manages to surprise us with a fairly delightful little detail about a very public figure, informing us that Gwendoyn L. Ifill "loathed her middle name and refused to reveal it." Let that one drive you crazy for the rest of the day. They don't tell, either.

The PBS NewsHour devoted most of its November 14 broadcast to remembering Ifill, the first forty minutes, and the final 6:30. It's lovely, and if you'd like to spend a little more time with her, here she is:

If you don't have time for the whole thing, at least catch the last segment, an interview with NPR's Michele Norris, in which Ifill remembers being a kid in a family where watching the evening news was a daily ritual, following politics was a civic duty, and where political conventions were fascinating to the young nerd-in-training:

Imagine watching a convention where Barbara Jordan gets up and speaks, and you're a little black girl at home, who sees nothing like this on television. It blows your mind. Where else was I going to see that voice,hear that voice, and so as a result whenever I go through the Austin airport I stop and pat her a little bit -- there's a wonderful bronze sculpture of her in baggage claim at the Austin airport, and I just greet her every time, because she was amazing.

And Shirley Chisholm. There were women, black women who were out there speaking their truth in an environment where it wasn't generally welcome.

Ifill recalled seeing a black woman correspondent on local news, and wanting to be able to tell stories like she did. Once in a while, when she'd caught up in the details of getting the news job done, Ifill said she would invariably run into someone who'd tell her their little girl loved watching her, "and that always stops me in my tracks. As long as I remember there's someone on the other side of the camera, who's watching me with expectation, and it can shape what they do next, I have to take what I do seriously every day."

She did, and TV journalism was better for it.