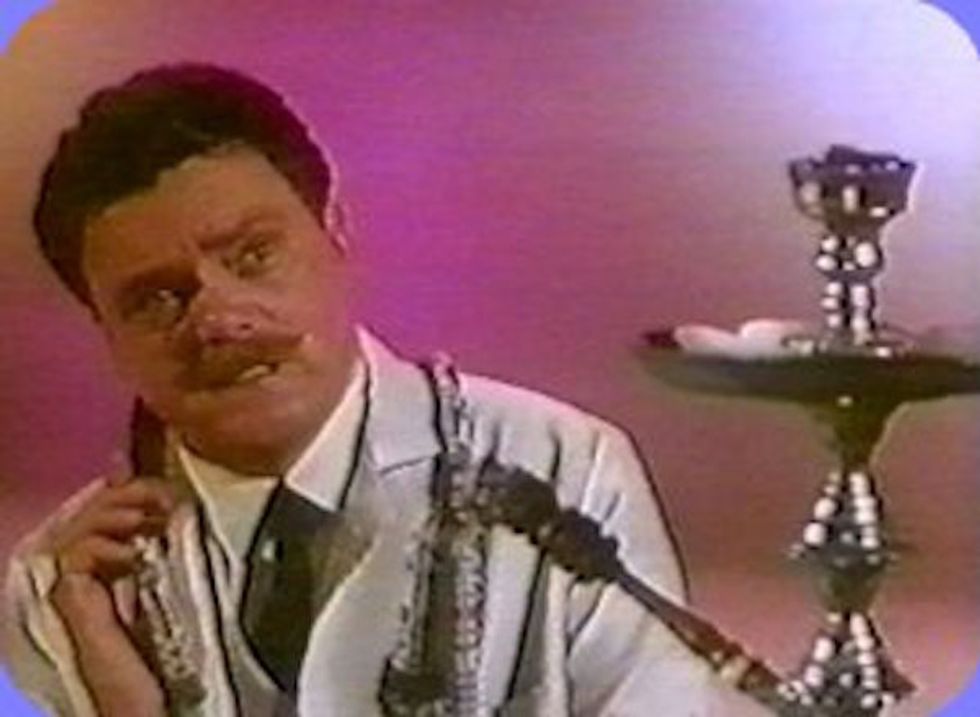 It is a known fact that it is generally a poor idea to take any medical advice from Gwyneth Paltrow, lest you end up with a steam burn on your vadge (fine, vulva, whatever), bee poison all over your face, or getting toxic shock syndrome from a mystical jade egg in your vadge (the actual, clinical vadge, not the vulva).

But what about medical advice Gwyneth gets from a dude who is a medical medium and gets super legit medical advice from Casper the Friendly Ghost, MD? Is that a good idea?

Oddly enough, it is not!

Gwyneth's ghost talking friend is one Anthony William, who claims he has the ability to diagnose medical problems through a spirit that talks to him, and who is a better doctor than all of the real medical doctors in the whole world. He has had this "ability" since he was a child, according to his website:

Anthony William was born with the unique ability to converse with a high-level spirit who provides him with extraordinarily accurate health information that’s often far ahead of its time. When Anthony was four years old, he shocked his family by announcing at the dinner table that his symptom-free grandmother had lung cancer. Medical testing soon confirmed the diagnosis.

For over 25 years, Anthony has devoted his life to helping people overcome and prevent illness—and discover the lives they were meant to live. What he does is several decades ahead of scientific discovery. His compassionate approach, which takes into account well-being on every level, not just physical health, has time and again given relief and results to those who seek him out.

Anthony's unprecedented accuracy and success rate as the Medical Medium have earned him the trust and love of thousands worldwide, among them movie stars, rock stars, billionaires, professional athletes, best-selling authors, and countless other people from all walks of life who couldn’t find a way to heal until he provided them with insights from Spirit.

Anthony has also become an invaluable resource to doctors who need help solving their most difficult cases. He is the author of the New York Times Best Selling book, Medical Medium: Secrets Behind Chronic and Mystery Illness and How to Finally Heal.

Wow, it sure is weird that Dr. Quinn Medicine Spirit only helps rich people with "mystery illnesses," rather than, say, curing leper colonies and communities devastated by the spread of HIV/AIDS.

According to the preface for his most recent article on GOOP, Anthony William uses his spirit to diagnose things like a "benign growth near the liver, an over-taxed adrenal system, or a rare blood disorder that might become a nuisance." Instead of prescribing medicine, which he can't do, because he's not an actual doctor, Jacob Barley over here recommends "common sense cures" like unwashed blueberries, spirulina, and iodine.

Anyhow, in this article for GOOP, Anthony William explains all about thyroid problems, which he claims are caused by Epstein-Barr Virus (the virus that gives you mono).

In over 95 percent of today’s thyroid disorders, including Hashimoto’s and even thyroid cancer, Epstein-Barr virus (EBV) is the cause. (The other 5 percent of thyroid problems come from radiation exposure due to chest X-rays, dental exams, and/or plane travel.) Which is to say, it’s not your own immune system that’s causing hypothyroidism (underactive thyroid), hyperthyroidism (overactive thyroid), thyroiditis (inflammation of the thyroid), or nodules, cysts, tumors, and tissue damage to the thyroid gland. It’s EBV.

WOAH if true! Except it is not at all true! The world's preeminent Gwyneth debunker, Dr. Jen Gunter, explains:

Dr. Christofides says that EBV is just like any virus and Hashimoto’s, like all other autoimmune diseases, can be induced by a variety of environmental triggers in a genetically susceptible individual. So virus + genetic issue can = autoimmune condition. There is nothing special about EBV in this regard. Also, she correctly pointed out that ionizing radiation causes cancer, not hypothyroidism. If you're going to fear monger over radiation at least get the condition right.

Another thing responsible for your Hashimoto's or other thyroid problem? An iodine deficiency!

Iodine is a disinfectant, effective at killing both viruses and bacteria. You’ve probably used it or heard of it being used as an antiseptic to clean wounds and prevent infection. When it’s in someone’s system, either through diet or supplementation, iodine applies this same germ-fighting ability. This also means that someone with an iodine deficiency is more vulnerable to bacterial and viral infections. So if you have a thyroid infection of EBV that’s causing hypothyroidism and/or Hashimoto’s, you don’t want to be iodine deficient, because it can translate to greater EBV susceptibility.

You know what people don't actually have too often anymore? Iodine deficiencies! That's because we put iodine in salt a long time ago, and people need so little iodine that this pretty much covers you. If you take iodine and are not actually iodine deficient, it can actually screw with your thyroid and cause hypothyroidism.

Dr. Gunter's article also explains that while iodine works as a topical disinfectant, it is not a good idea to use it as an internal one. Just like how you wouldn't swallow a bottle of Neosporin to fight off a cold. Alas, this is one of the pitfalls of getting medical advice from a Ouija board.

It would be one thing if the advice Gwyneth was spreading was essentially harmless woo. Like how I convinced some middle school jocks that they could get high from huffing opium scented incense and sticking cotton balls soaked in cod liver oil in their ears. But it's not. These things could actually have very bad effects on your health, and you should not do them. Or, at the very least, consult an actual, corporeal doctor before you attempt any.

(Happy Valentine's Day Wonkers! In lieu of the candy, flowers and jewels I know you were planning to send me for the purposes of declaring your undying love and devotion, I ask you please donate some money in the money donating thingie below so that Wonkette can continue giving me freelance work! #ROMANCE)