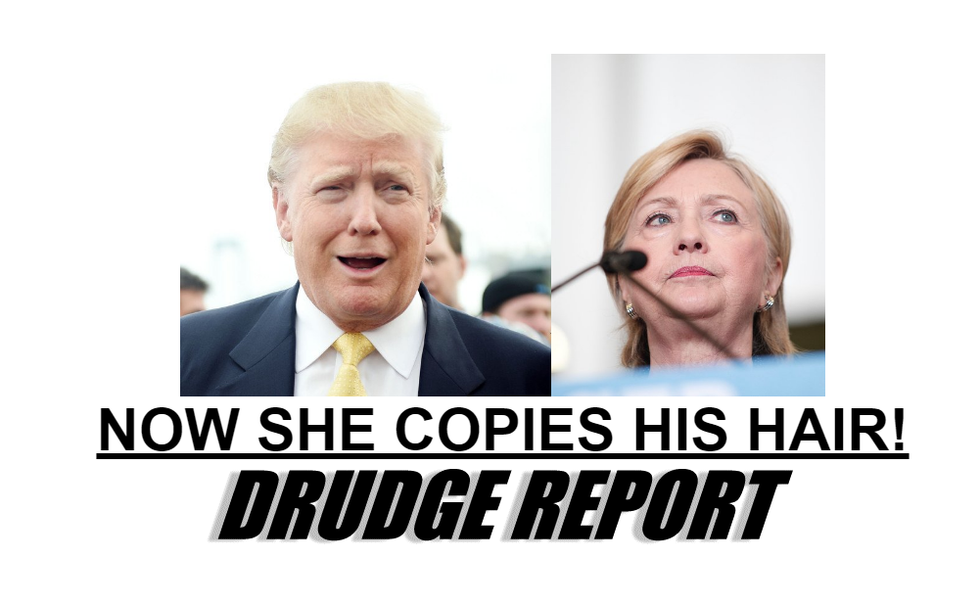 Did everyone go to theDrudge Report this morning, so you could start your week giggling and laughing at Drudge's well-known funnybone hilariousness? If you haven't, head on over right now; there, depending on how long he keeps it up, you may see the following as your top headline:

Haha, that is so true, as you can tell in the picture! Hillary has a common hairstyle that looks very nice, whereas Donald Trump has a nest full of wombat vaginas up on top of his head, and those two things are just alike, ayup.

We decided to click on the source material, just to see if there was actual smoking gun evidence that Hillary went to the beauty parlor and said, "Please style my hair like a big sack of wolverine diarrhea, because that is Donald Trump's hairstyle, and I am jealous of his hair." But this is all we found:

Yeah that is just Matt Drudge making a joke by himself and then linking his front page to his Twitter, saying nothing of any substance, yet people are clicking on it. And if you notice what is just above that headline ...

HOW EXCITING FOR US ALL. Maybe Drudge has this bullshit on his front page right now just to prove that he can drive all that traffic, while literally linking to himself whacking off on Twitter. If so, good game, we guess!

As RawStory explains, conservatives are trying to make it some sort of thing that Hillary is supposedly changing her positions to match Trump's, which makes total sense considering how she's beating the fuck out of him in the presidential race. Obviously she would keep trying to change herself to be more like that loser.

But hey, maybe it is true. Maybe Hillary is booking a trip to Sweden RIGHT NOW so she can have hand reduction surgery to make her paws little and delicate like Trump's. It could be happening, you don't know.