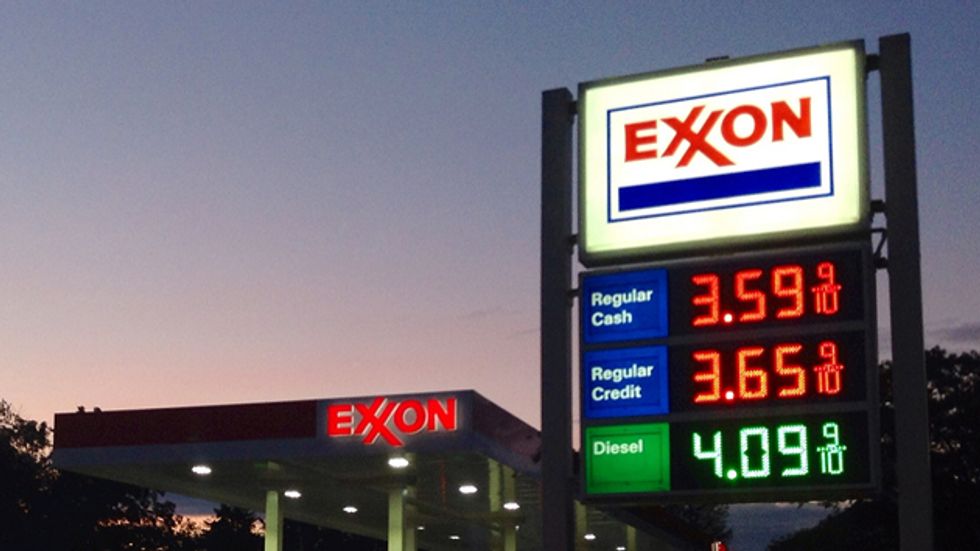 This post supported by a grant from the Patty Dumpling Endowed Chair for coverage of oil spills, pipeline disasters, and phony climate research for dumdums.

Exxon Mobil Corp is the fifth largest Corporate Person in the world, gorging itself on tens of billions of dollars in profits every year. The company earned its jolly stature by strict adherence to the "American Way" as applied to megacorporations: Tax avoidance. Government collusion. Exploitation of indigenous folks. General fuckery.

And because it's a gigantic dirty oil company, Exxon has tailpiped our beloved environment in many ways since its corporate birth by seed of Rockefeller. It's possible Exxon just wants to satisfy energy needs and provide for our "progress." Maybe the company would do it for free if it had to. Maybe it didn't know how much environmental damage it turned into pollution dollars over the years. Or maybe it's a soulless corporate person bent on planetary destruction and the constant stream of fossil fuel cash is merely a side perk.

In any event, New York Attorney General Eric Schneiderman is investigating Exxon Mobil in connection to allegations that its pants are on fire (like the Arctic). The state investigation is focused on when Exxon knew about its contributions to making Earth a hot mess and if it failed to properly notify the public and Exxon shareholders about global warming and its possible risks to both planet and profit.

Private lawsuits against these Corporate Persons rarely go anywhere. But since this investigation includes possible misrepresentations to beloved shareholders and not merely some plebe citizen who doesn't want his coastal hometown washed into the ocean, the New York state government has more recourse. Furthermore, subpoenas are casting a wide net and could turn over evidence that corroborate documents from internal Exxon scientists claiming the company knew of climate change as early as 1981 yet funded climate change-denying snake oil research in subsequent years.

[The Times sources] said the inquiry would include a period of at least a decade during which Exxon Mobil funded outside groups that sought to undermine climate science, even as its in-house scientists were outlining the potential consequences — and uncertainties — to company executives.

For its part, Exxon spokesman Kenneth Cohen indicated, “we recognize the risk(of climate change)," and Cohen touted how, as a result, Exxon has become the largest producer of natural gas in the United States. We guess that's the best they've come up with at this preliminary juncture.

Some observers compare this to similar legal actions that brought down the research-hiding bastards at Big Tobacco back in the day. There is hope that this case could expose our change-denying corporate entities to a mountain of liability like those who tarred your aunts lungs. Except in this case, it's not just human lungs, it's like, the Earth's lungs maaannn.

So open the floodgates, New York. Get some justice before an actual flood destroys all remaining evidence Exxon hasn't already burned with fat cat cigars.

On Friday, President Obama said "NO" to letting tar sands giant TransCanada lay pipe and send its Canuck sludge across the American heartland to the Gulf of Mexico.

W hope you're OK, TransCanada. You're not an American Corporate Person (despite your lobbying efforts), but a Corporate Person from north of the border deserves the utmost reverence, especially if it's a very serious oil producer that might help salivating Americans Roll More Coal! Let's check out TransCanada PR's Canadian Corp-splaining response to Obama's decision:

Tens of thousands of pages of evidence from its own employees and agencies irrefutably show Keystone XL is the safest, most environmentally sound way to transport needed energy to Americans.

By dismissing the 9,000 jobs for Americans building Keystone XL as “only temporary”, the administration has ignored the value of infrastructure jobs and has taken away work from those who seek it. In total, some 42,000 related jobs would not be created in the U.S. value chain as a result of this decision.

A press release by any other name.

Look, we hate to question a company reeling from hearing an actual American President deny the expansion of an actual fossil fuel project. But we have to quibble with a few things. First, you're not "safe." The pipelineyou already have leaks Canadian oil in the Land of the Free all the fucking time.

And about those jobs. While the State Department did publish the "42,000" number, that's only one part of the story, the other part being that it would only produce 35 permanent jobs for a country currently flush with Obama jobs.

As TransCanada bides its time, probably assuming the government will cave like they typically do, some GOP candidates are apoplectic about Obama choosing environment over energy.

While the Not Scientists in the GOP long ago determined the "solid science" behind the Keystone XL Pipeline, the GOP candidates are mostly concerned about these jerbs:

On a scale of 0 to !, this milquetoast response is a negative "?" You guys can do better than that.

"When I'm president" is probably how he started his tweets when he was running for student council.

OK, we're using the word "candidate" loosely, but not quite to the effect Jindal -- who is Not A Scientist, mind you -- drops "science denying radicals." Is there someone who can take the scientifically sound argument and give it some panache?

There we go. "Good for the environment." We're not even sure TransCanada is ballsy enough to call the XL Pipeline project more than "least bad way to deliver gross heavy oil to world market."

But in the end, all this GOP bellyaching about jobs is odd considering this is pretty much the only infrastructure project the GOP supports. Even this week's Transportation Bill was a half-assed, half-funded pulled tooth of congressional action-at-its-bare-minimum.

But not Keystone XL. It's somehow a different type of infrastructure project deserving of all the conservative love. How about that, TransCanada? Doesn't it make you feel special?