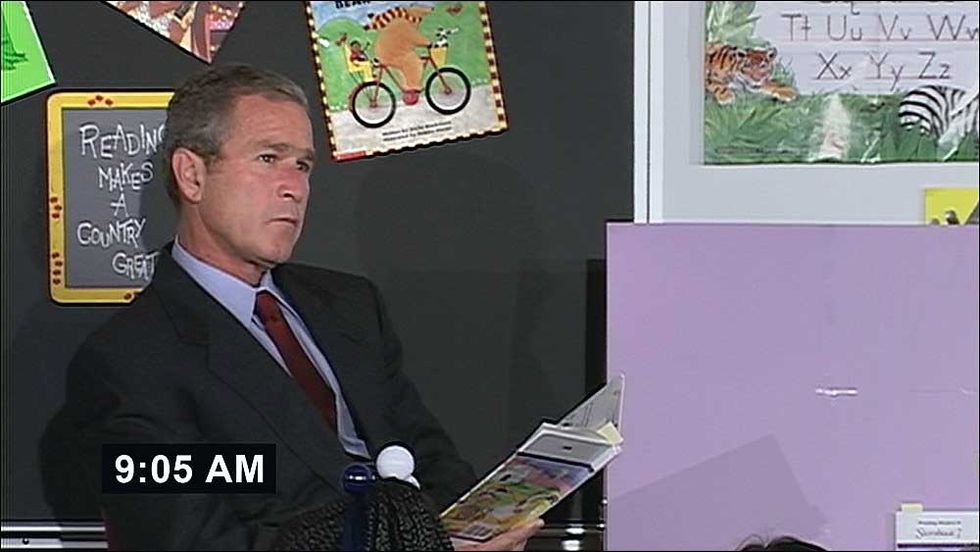 Gather 'round, chilren, and we will tell you a tale from the olden times of a dozen years ago.

You kids these days, with your Justin Bieber haircuts (seriously, cut that shit out, you look like idiots) and your Snapchatting and your Instagramming so your parents who are still on Facebook don't see what you're really up to (oh yeah, we know about that, kids) probably can't even imagine a time before terrorism mattered, but it's true. Back then, a president's love for vacation and brush-clearing was far more important than, like, protecting America from evildoers. Besides, Bill Clinton had been into protecting America and stopping terrorists, and in the early stage of his presidency, George Dubya Bush had intended for his legacy to be not being Bill Clinton. (That is why he also drove the economy straight into the ground, so no one would mistake him for Clinton, who gave us things like budget surpluses and jobs and stuff.) In those days, the Bush administration was far more concerned with things like busting pot clubs and covering up Lady Justice's boobies because that's what America used to be about, kids.

But then, 12 years ago today exactly, the original Usurper-in-Chief -- the one whose brother rigged the voting rolls in Florida and then got the Republican Supreme Court to be all "Counting votes is for pussies, Bush wins, but don't EVER quote us on that EVER," and no, we are NEVER going to stop being bitter about that -- was too busy summering on his ranch in Texas to give even an eighth of a fuck about receiving a Presidential Daily Briefing titled "Bin Laden Determined to Strike in U.S."

When bin Laden did "strike in U.S." 36 days after Bush received a briefing that bin Laden was planning to do that -- which NO ONE COULD HAVE PREDICTED, according to Bush's work wife Condi Rice -- everything changed, of course, and then only Republicans cared about terrorism, while Democrats were busy hating America and the troops and freedom. That's exactly how it happened, kids.

Now, of course, we can no longer take regular-sized toothpaste on planes, and we are required to wear flag pins at all times, and we must immediately send an email to a friend for the NSA to read if we see a brown person doing something suspicious because 9/11 changed everything. It even turned french fries into freedom fries. We had to stock up on duct tape for some reason that was never explained to us, and we had to take our families to Disney World so the terrorists wouldn't win, and we had to watch what we said so Ari Fleischer would not get us fired from our TV shows. (Okay, well, that was just one guy.)

Everything pretty much went to hell. We invaded all the wrong countries; let Republicans ram through a bunch of bullshit laws and tax cuts Democrats were too scared to stop, which tanked the economy; all of our friends around the globe started to hate us because we called them names like "Old Europe" and told them to kiss our fat American asses; and we pretty much became an intergalactic laughing stock.

All because President Poo-fer-brains* was on his summer vacation and did not want to be bothered and when the nice man from the CIA said shit was about to go down, yo, instead of cutting his vacation short and doing his job presidenting America, he grumbled “All right. You’ve covered your ass, now” and went back to chugging non-alcoholic beers and playing cowboy, and that, kids, is how we ended up with a gnarly-ass terrorist strike a mere month later, but at least the president's brush was cleared, the end.

*Under normal circumstances, we would call him President Shit-fer-brains, but we are being nice and restrained on account of how Bush apparently learned his lesson and decided to take that briefing he just got -- arterial blockage determined to strike -- seriously. We here at Wonkette send you our super heartfelt best wishes for a speedy recovery, George, so you can get back to painting creepy nude self-portraits to send your sister, whatever the fuck that's about.