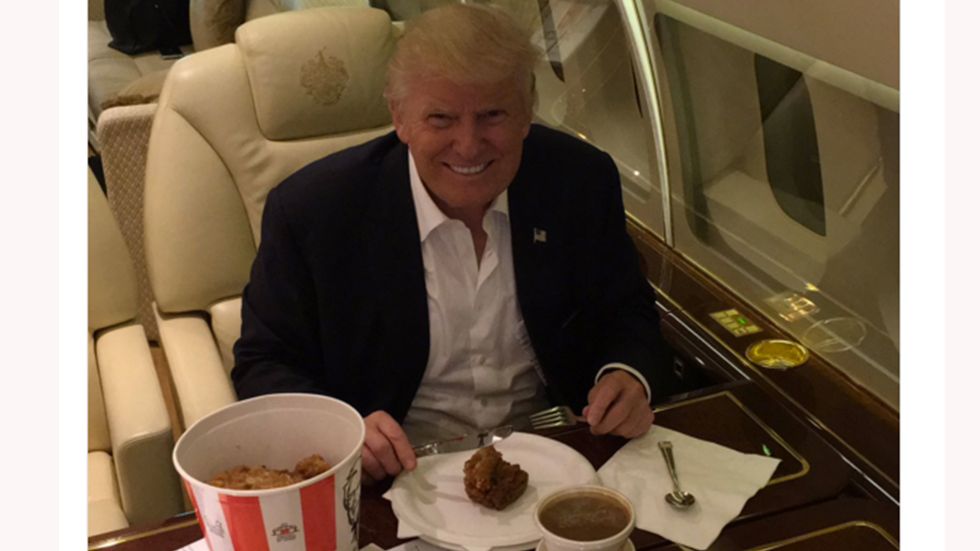 He has the best words. And the best KFC.

"But wait," you're saying. "Why is Politico publishing a WSJ interview?" The answer is because somebody leaked it because WSJ was sitting on it like a common Rupert Murdoch-owned fuckshow. Oh, the WSJ published a thing on the interview, which was led by editor-in-chief Gerard Baker. Unfortunately, they omitted the GOOD PARTS. Read the WSJ's version if you want. It describes a jolly old White House where Hope Hicks and Gary Cohn and Ivanka 'n' Jared sit around the Oval Office campfire with Daddy and rub his feet and pick the bugs out of his hair while he regales them all with stories about how YOOGE he is.

Politico reports on the turmoil over at the WSJ, over whether Baker likes to lick Trump's ass A LOT or WHOA THERE LICKY MOUTH, SAVE SOME FOR SEAN HANNITY!

The interview renewed questions internally at the paper about Baker’s leadership and posture towards the White House.

Baker has defended his paper in the past from criticism, both internal and external, that the broadsheet has been too soft on the real estate mogul and reality television star turned 45th president of the United States.

In an internal town hall with employees in February, Baker said that anyone who claims the Journal has been soft on Trump is peddling “fake news,” and that employees who are unhappy with the Journal's objective, as opposed to oppositional, approach to Trump should work somewhere else.

In other words, if you want to do actual journalism, GET A REAL JOB.

Forthwith, we share five of our favorite moments from the interview. For the whole glorious shitshow, you will have to go to Politico.

The part where Trump worked so fucking hard convincing those Boy Scouts to repeal Obamacare.

MR. BAKER: What have you been doing, Mr. President, sort of behind the scenes?

PRESIDENT TRUMP: A lot. A lot.

MR. BAKER: I mean, what do you think the crucial conversations have been?

PRESIDENT TRUMP: Many conversations. I just had one with a certain senator that was very convincing to that senator. So I’ve done a lot. I mean, last night – last night it was amazing. I was at the – you know, I was in West Virginia doing certain things and making a speech to the Boy Scouts, and that was some crowd. That was an incredible crowd.

But I’ve been working hard ...

You bet, Mr. President! When we saw Mitch McConnell crying after the final vote, we just knew they were tears of joy over how Mr. Art Of The Deal had made magic happen in the Senate. But we were wrong, Mr. President. As known liberal gay hippie rag National Review recently pointed out, you're not a closer.

Your daddy is crying about that in hell right now.

The part where Vanky stopped by to say "Oh hi! I just happened to be in the neighborhood!" and told Gerard Baker it was SO NICE TO SEE YOU at that party in Southampton and OMG how cute is it that we both have daughters named Arabella, like LOL YOU COPYCAT, no YOU ARE THE COPYCAT, anyway, SNUGGLES 'N' KISSES! Then Trump and Vanky fawned all over Baker for the WSJ's recent very nice fake news coverage of the Trump family.

Fuck this one, you get no transcript, for it is too stupid to print on the august pages of Wonkette. Just know that it JUST SO HAPPENED that Vanky dropped in RIGHT when Poppy was proving what an utter imbecile he is on "the existing conditions" and wouldn't you know it, there she was!

The part where Trump was yammering about farmland and suddenly bragged about how many Boy Scouts came to see him the night before.

The part where the WSJ accidentally said reaction to Trump's speech at the Boy Scout Jamboree was "mixed" and Trump was like "NUH NUH! THOSE ARE MY REAL FRIENDS AND THEY ARE POPULAR AND YOU CAN'T BE FRIENDS WITH THEM BECAUSE THEY ARE MY FRIENDS!"

Now you gone and done it, Wall Street Journal!

TRUMP: And I got a call from the head of the Boy Scouts saying it was the greatest speech that was ever made to them, and they were very thankful. So there was — there was no mix.

We guess that's why everybody was outraged and the Boy Scouts Of America had to issue a formal apology, milquetoast as it was. For the record, the BSA doesn't remember calling the White House to fawn all over Trump. They must have butt-dialed him by accident.

The part where Trump just found out some countries are big.

So, you know, and these are like countries, you know, fairly large, like 300 million people. You know, a lot of people say – they say, well, but the United States is large. And then you call places like Malaysia, Indonesia, and you say, you know, how many people do you have? And it’s pretty amazing how many people they have.

Also, they talked about golf, THE END.

Wonkette salaries are fully funded by lovely readers like YOU! If you love us, click below to pay our salaries!