Have Yourselves A Merry Confederate Christmas, In Hell! 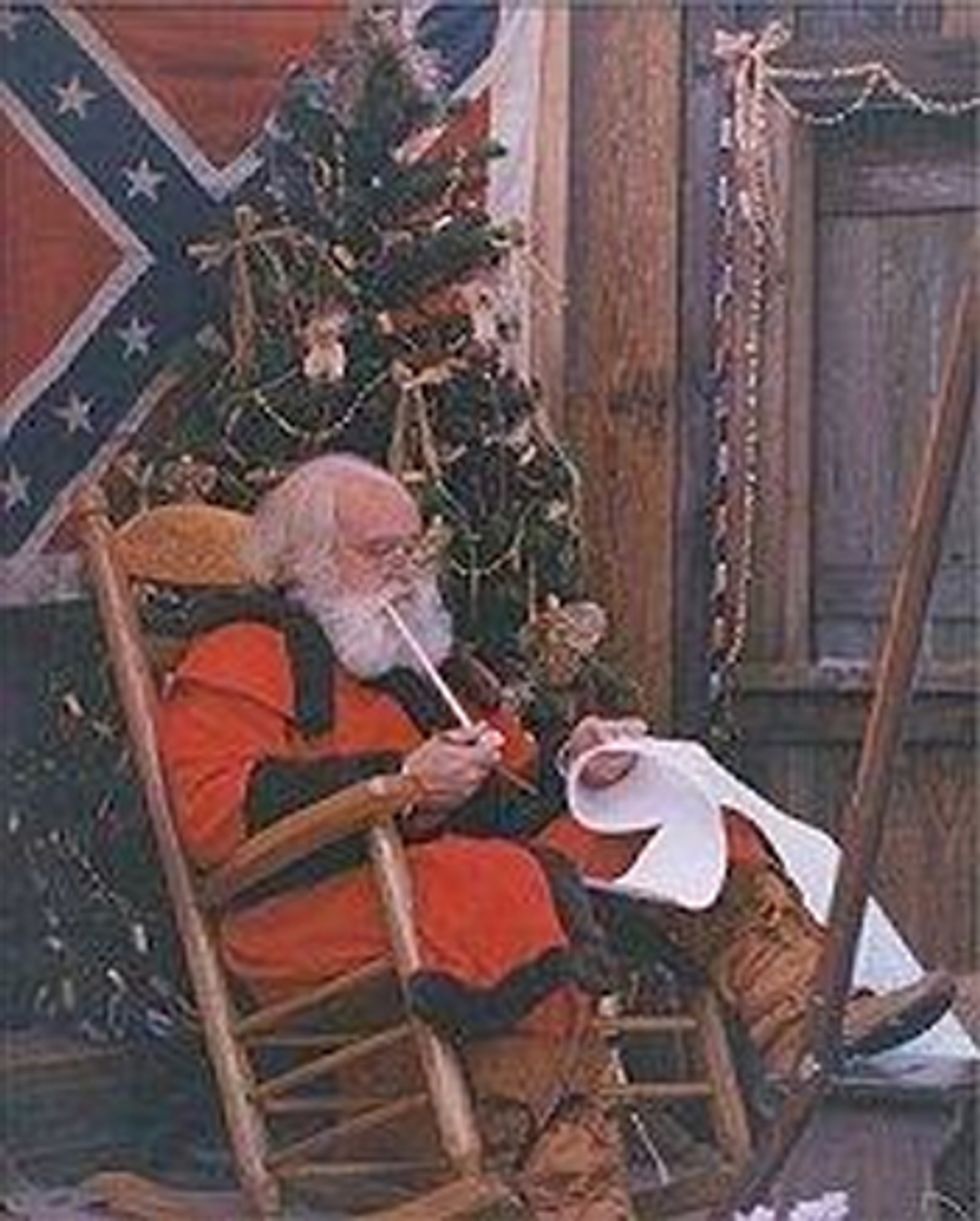 How could anyone object to a simple Konfederate Kristmas Kard?

Christmas, as we all know, is a time of joy, goodfellowship, and political score settling, as exemplified by the cheery Christmas card sent to fellow Republicans by South Carolina state Rep. Chris Corley to remind them that God will surely punish them for betraying the South last summer when they voted to remove the Confederate flag from the Statehouse grounds. Corley was on the losing side of the 94-20 vote to remove the flag, but in the best Southern tradition, Corley will hang on to the Lost Cause forever, because he is Proud Of His Heritage. And a petulant dick. The card is believed to be the most tone-deaf seasonal greeting message since Rick Santorum's 2012 "Hanukkah card" praising the redemptive power of Jesus.

The front of the card, shown above, has a photo of the flag in its former position of glory. The True Pissiness of the Season comes on the inside, and is aimed solely at Corley's Republican colleagues:

House Democrats, who are such a hopeless bunch of reprobates that they don't even merit consideration, received a neutral card with a photo of Corley's family. So did other non-politicians with whom he isn't feuding.

Elsewhere on the card, according to the Charleston Post and Courier, Corley included a literary reminder that his fellow Republicans are right up there with Judas, citing Dante's Inferno:

This is Cocytus, the ninth circle, the fourth and last great water of Hell, and here fixed in the ice, each according to his guilt, are punished sinners guilty of treachery against those who they are bound to by special ties.

We have to say we're pretty darned disappointed that we haven't yet found a photo of that cheery Christmas reminder. We're also looking forward to Corley explaining to some of his more staunchly Protestant supporters why he would be quoting a dirty Papist like Dante, whose work is not strictly based in the Bible.

[contextly_sidebar id="DXBA7zaGQA0l8g25MpJIDlKq5mhqmTPY"]In a statement, Corley said that it was up to recipients to look into their own Yankee-lovin' capitulatin' yellow-bellied carpetbagging scalawag probably gay-huggin' souls and decide whether the card's message applied to them:

I sent out a Christmas card ... If you felt the card pointed out a hypocrisy that you had in terms of not listening to the people you represent and just voting the way you wanted to vote because you were caught up in the moment, then that’s more on your guilty conscious than it is newsworthy.

Corley also explained that his card's condemnation of his colleagues to the deepest pits of Hell itself was meant as a joke, just funnin' around or something:

“If somebody’s feelings are legitimately hurt about that Christmas card, I think that might speak more to their conscience than the content of the card,” he said.

House Minority Leader Todd Rutherford, one of those Democrats who received Republican help in ruining South Carolina forever, called on Republicans to condemn the Christmas card, lest people assume Corley's opinion represents them, too:

I am waiting for the Republican Party to condemn his Christmas card and the statements in the card and distance themselves from him ... Everyone has a right to their belief. But he's a Republican, and either he speaks for them or he doesn't.

Corley also used Thursday to prefile a bill for the next legislative session that would require a referendum on returning the Confederate flag to the Statehouse grounds, since a mere 94-20 majority couldn't possibly have reflected the Will of the People.

We can hardly wait to see what Corley comes up with for Easter.

Forgive them, Father. Bless their hearts, they mean well.