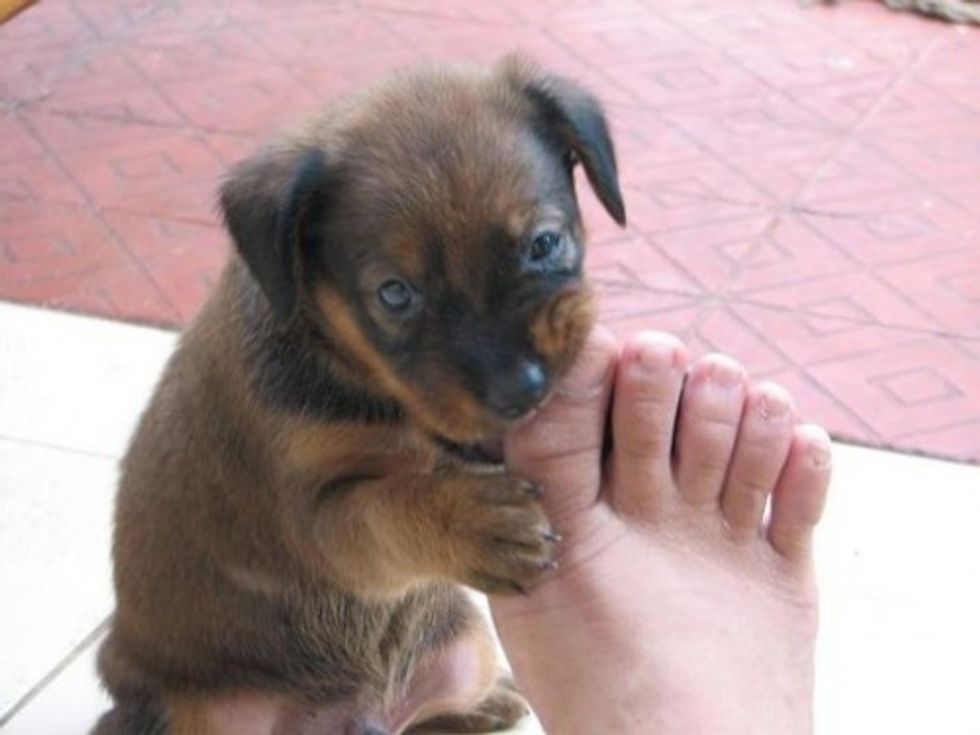 We chose this instead of a picture of Dick Morris. You're welcome.

Amoral prostitute-toe-sucker (allegedly) Dick Morris has finally found a home that's appropriate for the special, uh, "talents" that are his forte, reports Media Matters, with only the slightest wee bit of editorializing:

The Capitol Hill-based newspaper The Hill has dropped laughingstock Dick Morris as a columnist after he signed on with the National Enquirer as its chief political correspondent.

In a statement to Media Matters, a spokesperson for The Hill wrote: “In light of Dick Morris' new position at the National Enquirer The Hill has decided to discontinue his column at The Hill. We wish him well.”

Morris’ dismissal from the paper is long overdue. In December 2012, several Hill staffers told Media Matters that the columnist lacked credibility in light of his faulty predictions, with one saying: "I think everyone at The Hill views him the way that people outside The Hill do. He is a laughingstock, especially the way he acted in this last election."

Also, he smelled funny. Like dirty feet, they might have said. Jeez, Media Matters, that's pretty harsh language for a formerly powerful dude who was once a high-level political operative for Bill Clinton, but then resigned amidst prostitution rumors and for some reason became a rightwing hack at such venerable journalistic institutions as Newsmax. Just because Morris has been wrong more frequently than Bill Kristol is no reason to be mean.

It's as if a guy goes and predicts an overwhelming victory for Mitt Romney and suddenly everyone thinks he's a hack? SO UNFAIR. Or maybe it had something to do with his hacky website, which featured "political cartoons" that were apparently drawn by a ten-year-old who wandered in off the street, like this piquant commentary on Barack Obama's utter failure to bring down gasoline prices.

Why "gas prices" were portrayed as a giant kangaroo monster with a perplexing Nigel Thornberry mustache was never explained. Morris also floated the highly idiosyncratic prediction that Bill Clinton would absolutely be voting for Mittens Hairgel Bain McRomney in 2012, although obviously the Big Dog would probably say he supported Barack Obama, since Hillary was being held against her will in the highest diplomatic office of our nation:

“I guarantee you, Sean, based on what I have heard from third parties or I have spoken to, that William Jefferson Clinton is going to cast his ballot for Mitt Romney,” Morris said. “However, he’s going to open his mouth for Barack Obama because his wife is hostage. They have her under lock and key as Secretary of State, and he is scared that Obama will lose and blame him if he undermines Obama. So he will do everything he asks him to do, and then he will jab him whenever he can.”

And we sure saw how Bill Clinton secretly undermined Obama that year, with his bizarre talk of "mathematics" at the Dems' convention.

National Enquirertouted the former Clinton adviser turned Clinton foe’s hiring in a press release, claiming it “underscores our commitment to investigative journalism. … He greatly values our commitment to delivering the kind of quality content that our readers have come to trust us for.” Morris said that the publication is “one of the few journalistic outlets that has the courage to publish the truth.”

[wonkbar]<a href="http://wonkette.com/600012/is-ted-cruz-adulterous-foreign-born-whore-maybe"></a>[/wonkbar]Yes indeed, like all the well-sourced dirt on Ted Cruz's many mistresses! You can tell how proud Morris is of his new job by the way he parks two blocks away from the office, so no one will think he's making a big deal about working at the National Enquirer.

It's a match made in heaven, or at least in the check-out aisle right below the gum and mints. Now Dick Morris can be as wrong as he wants to be (remember how Obama threatened Gallup into skewing the polls in his favor?) and nobody at all will notice, because for fuck's sake, it's only the National Enquirer after all.