Hawaii Crisis Pregnancy Center Will Jam An Ultrasound Wand In Your Vagina FOR JESUS! 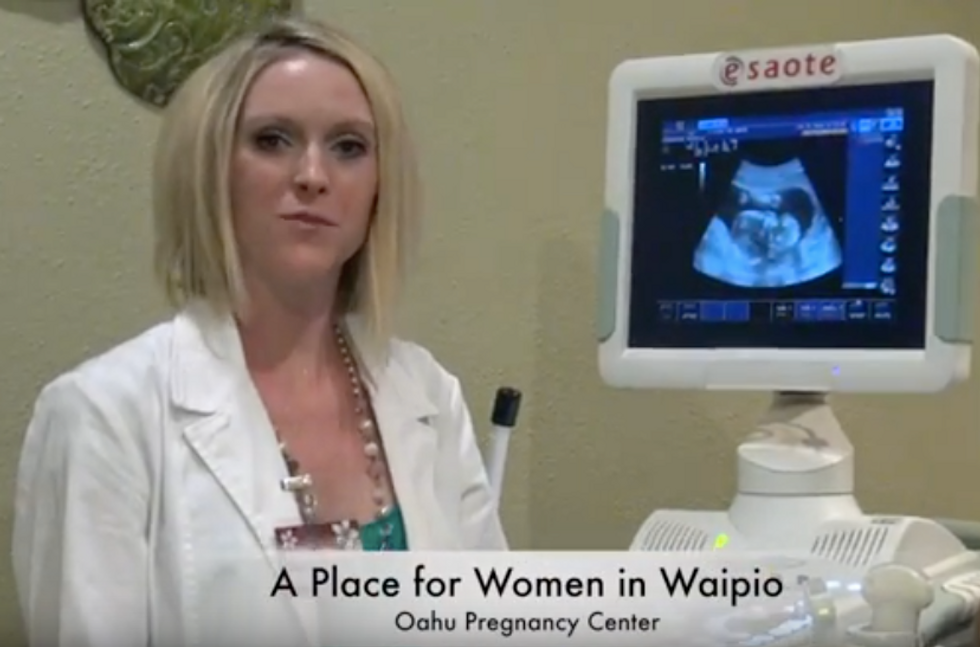 This is Nurse Rebecca Zaman. She works at A Place For Women, a crisis pregnancy center in Oahu, Hawaii. Nurse Rebecca is a nice lady who jams vaginal ultrasound wands into pregnant teenagers for Jesus. Here, let her tell you about it herself!

Did you catch her saying, "If you're not very far along in your pregnancy, we'll also need to do a vaginal ultrasound?" Well, Nurse Becky was kinda fibbing right there. She doesn't need to do a vaginal ultrasound. She wants to do it, because that's the only way to get an image of an embryo before about seven weeks pregnancy when it can be picked up on a regular abdominal ultrasound. And Nurse Becky wants to print out a photo of "your baby" today! So put your feet in those stirrups, little lady, because it's time for a vaginal probe! Sure it's unpleasant and you might bleed a little bit after. Guess you shoulda thought about that before you had sex now, huh!

A real medical care provider like Planned Parenthood might do a transvaginal ultrasound to determine if a patient is a candidate for a medication abortion. An obstetrician might perform one to diagnose uterine fibroids or an ectopic pregnancy. But A Place For Women isn't a medical care provider, although it has a nurse and a radiologist on staff. It's actually a church called Calvary Chapel of Pearl Harbor that preys upon women who are too poor or scared or alone to access real medical care. And once Calvary Chapel has told a vulnerable pregnant woman that abortion will give her breast cancer and cause her to commit suicide before spending eternity in hell, they send her on her way with a framed ultrasound image and a bunch of pamphlets. As the good Lord intended!

Nurse Becky came to our attention because her employer is suing the State of Hawaii over its new law requiring Crisis Pregnancy Centers to post this three-sentence notice in their waiting areas.

Hawaii has public programs that provide immediate free or low-cost access to comprehensive family planning services, including, but not limited to, all FDA-approved methods of contraception and pregnancy-related services for eligible women. To apply online for medical insurance coverage, that will cover the full range of family planning and prenatal care services, go to mybenefits.hawaii.gov. Only ultrasounds performed by qualified healthcare professionals and read by licensed clinicians should be considered medically accurate.

Forcing a radiologist and a nurse to tell women that they can access real medical care! This aggression will not stand, man!

State sponsored anti-life activists are so in love with abortion that they want to suppress the free speech rights of pro-life pregnancy centers in Hawaii and force them to become abortion referral agencies. They cannot tolerate the existence of life-affirming pregnancy centers that give mothers contemplating abortion hope and support as they are empowered to choose life.

Yeah, CPCs are the real victims here! Their sky god ordered them to keep women away from doctors who will provide actual care, and those heathens in the Hawaii state house won't let them do it!

“We’ve had instances here … the centers have used personal health information that patients disclosed to contact their employers and families to intimidate them not to pursue an abortion,” said Dr. Shandhini Raidoo, an OB-GYN in Hawaii, who has seen patients from these centers.

After visiting A Place For Women in 2014, college student Megan Trube found herself signed up for weekly email updates from an online pregnancy website. When she testified in support of Hawaii's bill, the lobbyist from A Place For Women attempted to read parts of Trube's medical record in open Senate session. Holy HIPAA Violation, Batman!

Calvary Church's fake clinic is associated with the National Institute of Family Life Advocates (NIFLA), and both are plaintiffs in the lawsuit against the state of Hawaii. But NIFLA knows damn well that the First Amendment argument is junk, since the Ninth Circuit just told them in October to GTFOH with that shit. The state has the right to regulate the practice of medicine, and a state-licensed doctor and nurse have no First Amendment right to lie to women. This means you, Nurse Rebecca!

Calvary Church also peddles post-abortion "recovery classes," where some lunatic beats a woman over the head with the Bible until she agrees to redeem herself by ambushing vulnerable girls who wander in for a pregnancy test. PROBABLY.

College student Trube testified that her 2014 visit to A Place For Women included a lengthy "counseling" session with four women who browbeat her with their own tales of guilt over past abortions.

They asked me how far along I thought I was, if I was in a committed relationship, what my religion was, if I was considering an abortion, and if I believed that life began at conception. After all of the questions, the women proceeded to tell me their personal stories about abortion and how they wish they never would have gotten one and put the baby up for adoption instead.

Were these graduates of the church's re-education sessions? Safe bet!

And now we are sad, thinking about girls who wander in there looking for medical help, only to be captured by fundamentalist loons in lab coats. And we're angry that Nurse Rebecca is inflicting that vaginal probe on people who don't know that they should get dressed and run away. And, as a parent of teenagers, Your 5$F is wondering what kind of asshole allows her child to fall into the clutches of these charlatans? If your kid is so alone that she winds up in a place like that, you need to sit down and have a think about how you failed your child!

But all that is depressing. So let's watch this video about crisis pregnancy centers from the amazing Lizz Winstead and the Lady Parts Justice League's Vagical Mystery Tour, which your Wonkette covered last month.

Feel better? GOOD. Now go call your Senator about this fucking monstrosity of a health bill! DO IT NOW!

Wonkers, we need you to fund our salaries! This shit is hard!