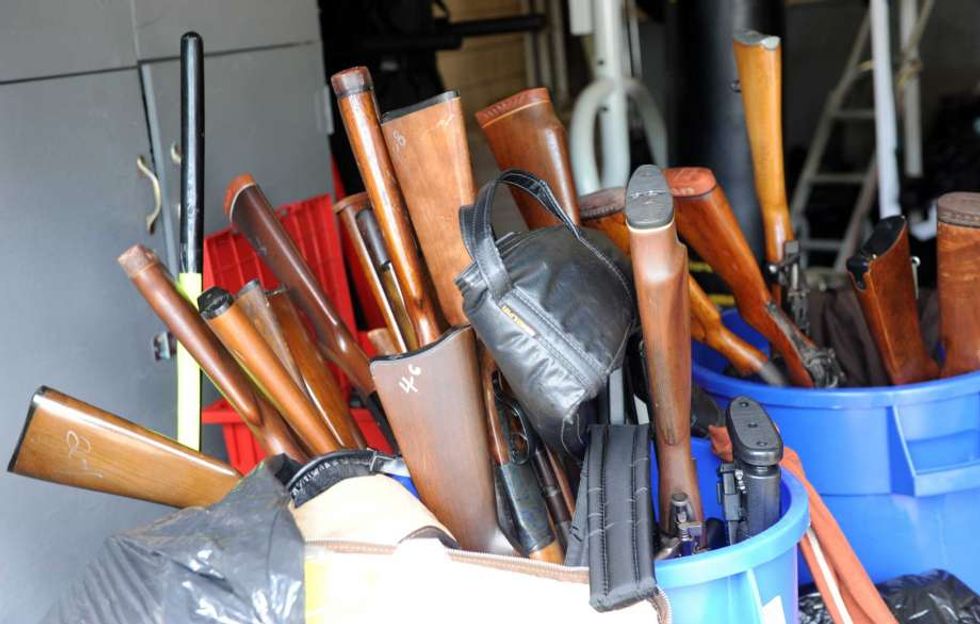 If Big Brother and the lizard people get their way, the beautiful island state of Hawaii may be the first to put gun owners in a FEDERAL DATABASE...just like common car drivers.

A bill headed to Governor David Ige's desk would require gun owners in Hawaii to be entered into the the FBI's "Rap Back" database, so that law enforcement can be notified when they commit a crime in another state that disqualifies them from being allowed to have a gun. Which makes sense! Because if we don't allow people with certain kinds of criminal records to buy guns, we probably shouldn't let them keep the ones they have. Duh.

Currently, people all over the country are registered in the "Rap Back" service -- teachers, bus drivers, and others in "positions of trust." This allows law enforcement to know if someone like that commits a crime in another state, in order to prevent criminals from hanging around children.

Here is how it is described on the FBI website:

The Rap Back Service provides authorized agencies with notification of criminal, and, in limited cases, civil activity of individuals that occurs after the initial processing and retention of criminal or civil transactions. Rap Back does not provide new authority to agencies, including the FBI, for collection of biometric and biographical information. It does, however, implement new response services to notify agencies of subsequent activity for individuals enrolled in the service. Including a more timely process of confirming suitability of those individuals placed in positions of trust and notification to users of criminal activity for those individuals placed on probation or parole.

Hawaiian law enforcement has had multiple issues with people who already have guns going to buy a new one, and the new background check finding that they have committed a crime in another state since the last time they tried to buy a gun; the bill, introduced by Sen. Will Espero and passed by the legislature this April, attempts to close these gaps. Honolulu Police Department Maj. Richard Robinson, who helped draft the legislation, says this happens about 20 times a year. Which is a lot!

NATURALLY, the NRA and other gun nuts are totally freaking out, and insisting that they should not have to be registered by the government to practice a constitutional right, even if that constitutional right could interfere with someone else's right to life, liberty and the pursuit of happiness (can't pursue happiness if you are dead!). They believe that this will lead to the government knowing not only who has guns, but also where all of their guns are, which could lead to the government then confiscating their guns so they can't overthrow a tyrannical government.

***SIDEBAR: Is it not incredibly presumptuous of these gun people to assume that the rest of us would ever want them to overthrow the government and put themselves in charge? I certainly do not want that! They are the literal last people I would ever want in charge of anything. I mean, really, who could they possibly overthrow that would be worse than they are? ALSO, if they don't want anyone to know they have guns and where those guns are, why do they keep trying to hang out in Starbucks armed to the teeth with AK-47s? Because that is a pretty big hint. JUST SAYING.***

The NRA's Amy Hunter told the Associated Press, "This is an extremely dangerous bill. Exercising a constitutional right is not inherently suspicious... Hawaii will now be treating firearms as suspect and subject to constant monitoring."

If this were true, then it would also mean that the entire country was treating all the teachers and bus drivers as "suspect," which does not seem to be the case. I'm pretty sure the entire purpose of this bill is to make sure people are following the law and that violent criminals do not have guns. OR TO PUT THEM ALL IN FEMA CAMPS BY ORDER OF THE POSTMASTER GENERAL. One of the two.