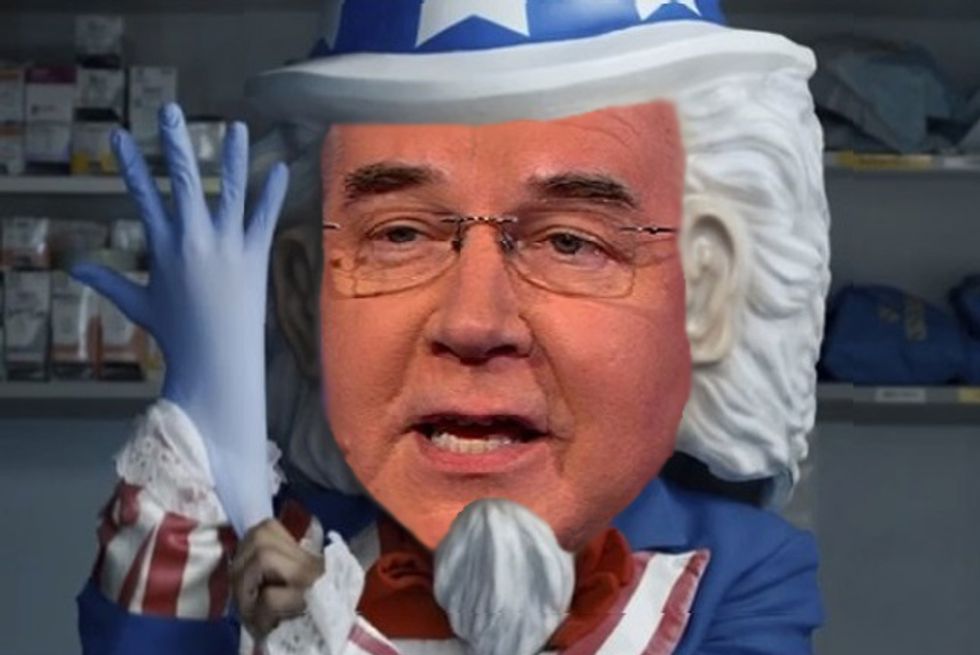 You may lose your coverage, but he has some stock tips for you

Just in case you may have been under the illusion that the failure of Republicans' efforts to repeal the Affordable Care Act meant that Obamacare is safe for now, we'd like to remind you that even though the ACA remains the law of the land, we have a president who is quite sure it's dead, and he's appointed plenty of people to help pull the plug. Law? What law? All they see is a bunch of administrative opportunities to make the ACA fail, since it is, after all, a failure. The Daily Beast has a jaw-dropping look at some of the ways the Trumpers are busily using the administrative machinery of government to subvert a law that's still on the books, because after all, that's what a minority of Americans elected them to do.

For instance, a portion of the budget for the Department of Health and Human Services is dedicated to producing ads encouraging people to sign up for the ACA during open enrollment, informing people of the benefits, and so on. Under new HHS secretary Tom Price, who's excited at the prospect of repealing the ACA, those funds are going to the creation of videos arguing the ACA has harmed ordinary Americans' healthcare. There's a whole bunch of them prominently displayed at the HHS Youtube site (autoplay video at link):

Meet the nice mom whose severely disabled 22-year-old son will lose his Medicaid benefits, she says, because when Medicaid was expanded in Illinois, the state legislature voted to accommodate the "able-bodied" new enrollees by cutting care for people with disabilities.

We think maybe the problem there is with the Illinois legislature's priorities, not with the ACA? Several rightwing groups have argued that Medicaid expansion has siphoned care away from the "truly needy" to lazy takers, but of course, the people covered by the expansion tend to have real health needs, and most are employed in low-paying jobs that don't provide health benefits.

The costs of the ACA expansion are covered 100% by the federal government, so if Illinois is distributing the funding in a way that hurts people, that sounds to us like an argument for fixing that issue, not throwing millions off healthcare. But maybe if Medicaid is slashed by $800 billion, state legislators will decide to help only the most desperately needy, and this young man will get the care he needs. Or not? In any case, this video is a classic case of Republican propaganda: pit one group of disadvantaged Americans against another in a battle of Who Deserves Help? How about helping everyone, and not giving an enormous tax cut to the top 2 percent of Americans?

The video ends with this useful announcement:

These videos were paid for with funds meant to promote the ACA -- and those same funds were used for travel and lodging for the people who appear in them, to tell America how terrible the ACA is:

Getting the subjects to HHS’ studio also cost taxpayer money. In this case, the White House itself found individuals, often through local news stories and Republican Party connections, and flew them to Washington, D.C., to participate in roundtables to discuss Obamacare. From there, they were whisked across town to HHS headquarters [...]

Dr. Ryan Stanton of Kentucky is critical of Obamacare but also acknowledges that the legislation has been beneficial in certain respects. He’s also uncertain about Republican-authored replacements. When he sat down for a recording at the HHS studio he said it “felt like they were pushing for a harder line against Obamacare” than he was delivering.

“I don’t think mine was the exact message they were looking for of, ‘Oh, let’s march against Obamacare,’” he recalled. “It was clearly an effort to push the repeal and replace.”

Oh, but beyond turning the ACA promo budget into a vehicle to subvert the ACA, there's more. The official HHS Twitter feed is now sending out messages encouraging healthy eating, exercise, regular checkups, and OMG OBAMACARE IS DOOMED!

Similarly, the HHS website has been revised to propagandize against the law that HHS is supposed to administer:

In the Obama administration, this piece of online real estate featured direct links for consumers to apply for coverage and infographic breakdowns of the ACA’s benefits and critical dates. Since Trump was inaugurated, it has been retrofitted into an bulletin board for information critical of the law.

Where the old site had a direct link to the healthcare.gov portal to shop for insurance, the HHS site now links to a page encouraging visitors to go through a private insurance broker. Other information is just plain harder to find -- a link to a "plain English" explanation of how the ACA works has been replaced with a link to the difficult-to-read legislative text of the ACA law itself, to prove that it's scary and confusing. In future iterations, the page may simply be replaced with a big red sign reading GET A JOB, LOSER.

Andy Slavitt, the former acting administrator for the Centers for Medicare and Medicaid Services (CMS) under Obama, says the impact of the changes -- we've only listed a few -- is difficult to measure, but it's definitely real:

I think uncertainty causes people to freeze [...] So I think it is quite impactful. And look, you’re not hired into the administration to decide whether you agree with the law you’re asked to execute. That’s not your job... Congress appropriates funds for you to carry out laws that they passed, not to spend those funds on activities that counteract those laws.

That's crazy talk. Next you'll be saying the EPA is there to protect the environment instead of to help drill for oil.

Congressional Democrats are trying to fight against turning HHS into an agency that subverts instead of carrying out the law, but so far, Price hasn't responded to letters from senators asking what the hell he's doing. They may have more success with a complaint to the Government Accountability Office, requesting an investigation of whether HHS is misusing its publicity budget.

Go read the whole Daily Beast piece, and be ready to get mad. The hellish thing is that stopping the legislative effort to repeal the ACA may be easier than dealing with this behind-the-office-door fuckery. It's easier to say "vote no" than it is to make a poster calling for firmer oversight of HHS's publicity resources, but without Congress telling these bastards to do their jobs, they may very well achieve the goal of making the ACA fail. If they do, we have to make damn sure they own it. And to elect a Democratic Congress in 2018 to put more pressure on agencies like HHS to do their damn jobs.

Yr Wonkette is supported by reader donations. Please click the "Donate" clicky so we can keep raising your blood pressure, you masochist.