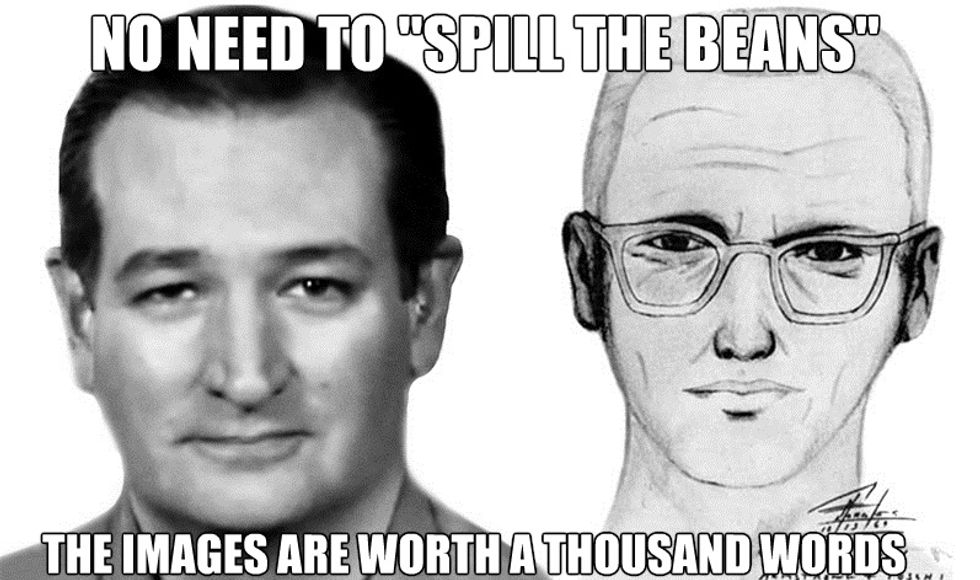 Trump has to be more careful about those retweets

Heidi Cruz would like to tell all you people that Ted Cruz is not the Zodiac Killer. Then again, that's exactly what you'd expect the wife of the Zodiac Killer to say, now isn't it? It's not like she's going to come out and admit it.

In a Yahoo News piece inspired by Larry Wilmore's riffs at the White House Correspondents' Dinner Saturday, Mrs. Cruz responded to the internet meme and insisted she knows of no serial killing in her husband's past:

“Well, I’ve been married to him for 15 years, and I know pretty well who he is, so it doesn’t bother me at all. There’s a lot of garbage out there,” Heidi said.

We would simply like to point out that this proves nothing. Bernie Madoff's wife had no idea what he was up to, either. But because this is the 2016 presidential campaign, Yahoo was careful to point out that it is all the result of an internet meme anyway:

There is a popular Internet meme where people have asked whether Ted Cruz is the infamous Zodiac Killer, who was responsible for a string of unsolved murders and taunting letters to law enforcement in California during the late 1960s and early ’70s. This meme has spread widely, even though Cruz was born in 1970, two years after the first killings took place and is most definitely not the Zodiac Killer

70% Of Americans Perfectly Suited To Sit On House Science Committee

Look, Yahoo, you aren't going to go convincing people with weak facts like that. Not in a world where significant portions of the electorate believe Barack Obama is a foreign-born Muslim who is actively working to destroy America, that astrology is real, or that humans and dinosaurs lived at the same time. Besides, some of the evidence is so compelling!

To their credit, Yahoo apparently didn't originally plan to ask Heidi Cruz about the Zodiac Killer thing; it simply arose sort of organically while they were covering her:

Yahoo News asked Heidi about his remarks after a pair of supporters she met with marveled at her ability to “deal with” the “smearing and the scorched-earth stuff going on” during this heated GOP primary.

Huh. Well, now we're going to have to ask Heidi Cruz for a citation -- we're fairly certain that the chances anyone really believes Ted Cruz is the Zodiac Killer, or would "be swayed" by an internet meme about it, are roughly equal to the possibility that Ted Cruz actually is the Zodiac Killer.

Or maybe Heidi Cruz was simply acknowledging, as obliquely as humanly possible, that her husband is such a creepy dude it's no surprise people might joke about him being a serial killer. It has to be hard being married to a guy so many people simply can't stand.