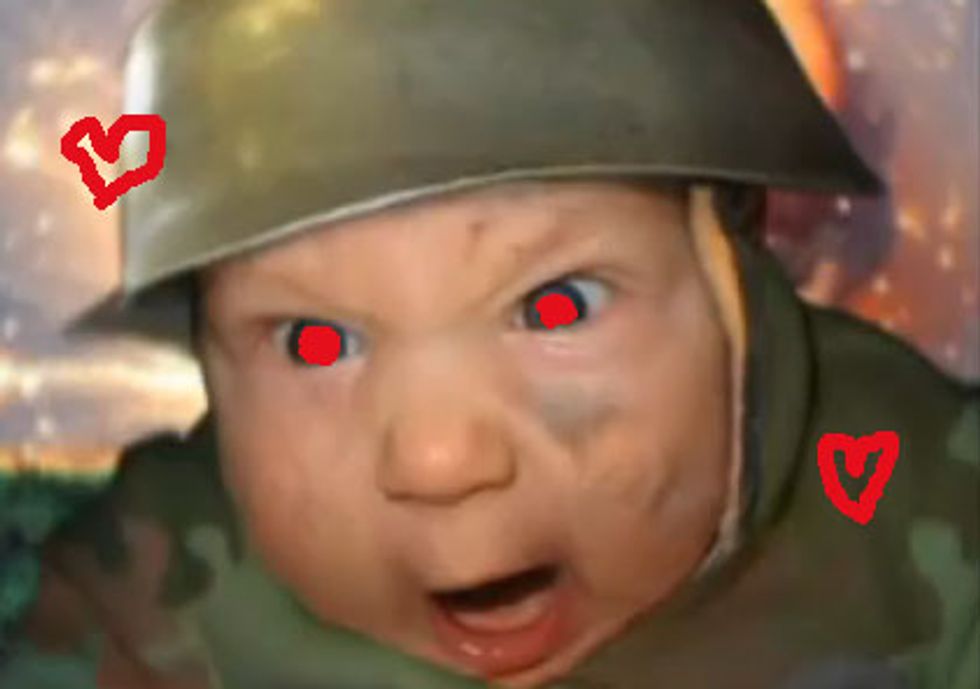 Jeb Can Fix It

Jeb Bush is soooooo pro-life, he will defund women's healthcare because come on, how much do we really need to spend on vag checks for cancer, right?

Jeb Bush is soooooo pro-life, he will use the power of Big Government to keep a braindead woman on life support.

Jeb Bush is soooooo pro-life, he's sort of "conflicted" about whether the death penalty is bad.

Jeb Bush is soooooo pro-life, he'd murder an innocent baby in his crib. With enthusiasm!

Have you ever wondered whether, if given the opportunity, Jeb Bush would go back in time to kill Adolf Hitler in his crib?

“Hell yeah, I would!” the former Florida governor told HuffPost. “You gotta step up, man. That would be key. [...] It could have a dangerous effect on everything else, but I’d do it -- I mean, Hitler.”

This is supposed to be one of those haha funny lighthearted attempts to make Jeb seem like a likable guy, instead of the pathetic fucking loser piece of Bush he is. After all, Jeb not only thinks He Can Fix It, but he's got a brand new plan, and boy is it a good one:

But we're not about to let Jeb jokingly shrug off his ideological inconsistency, because fuck him. He's not cracking jokes and making with the ha-ha when he threatens to deny women healthcare because he's so "pro-life." And the whole point, according to his beloved movement, is that EVERY. SINGLE. LIFE. is precious and sacred and must be protected at all costs -- even the cost of the life of the mother carrying it.

And yeah, sure, "pro-lifers" also tend to support the death penalty, but that's different, because those lives aren't innocent (even when they are), so fry those motherfuckers, yee haw, JUSTICE!

But the hypothetical thought experiment of whether it is OK to go back in time and murder this one baby, before he'd genocided even one single person, and was still, by all "pro-life" standards, innocent? Turns out there's a nice big gaping loophole there, how very convenient. Abortion is bad and wrong and immoral under any and all circumstances -- no ifs, no buts, no exceptions, no cynical mocking bunny ears "health" of the mother.

Besides, if Hitler's parents had stopped him from listening to hip-hop and watching movies with sex in them, or we'd at least armed all the Jews, Hitler never coulda Hitlered anyway.

The complete absurdity of this "debate" and Jeb's sad attempt at humor, or maybe his sad attempt to show us how very tough he is -- he eats nails for breakfast, you know -- shows just how full of bull farts "pro-lifers" really are. And not just the ones who support gunning down doctors in their churches or terrorizing clinics with arson and bombs and threats.

Bible-humping evil Uncle Chuckles Pat Robertson opined, earlier this year, that when babies die outside the womb, well, be grateful to God for post-birth abortioning them, because that baby could have grown up to be Hitler, so whew, genocide bullet dodged.

Maybe this is the exception women need to be granted abortion by the "pro-lifers." Forget "the baby is already dead inside me" or "the baby is missing a brain" or "I'm gonna die if I have to carry this pregnancy to term" or (obviously) "I don't want to have this baby."

Ladies, if you're looking to terminate your pregnancies, just make like Ben Carson and say God came to you in a dream and said your baby is the next Hitler, ABORT! And then it'll be "hell yeah" A-OK to kill it, for the good of humanity. It's the right thing to do, and come on, woman, sometimes you gotta step up.