Hello Paul Ryan, You Will Impeach Trump After The Tax Cuts, Yes? 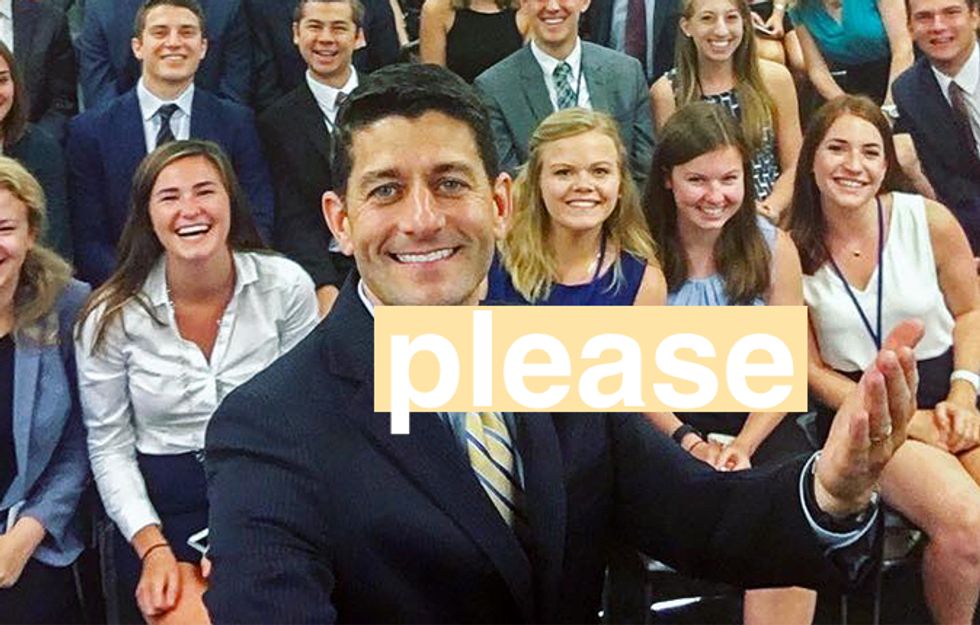 You don’t know me, but you are the Speaker of the House of Representatives. That makes you the number one guy for impeaching a president, due to the Constitution and the rules of the House (I checked.)

So, I am writing to confirm that you will impeach Donald Trump after he signs your tax cuts.

I feel this is a very good idea for you, and also, everyone else.

About the tax cuts. I would prefer that you don’t do these at all, because the ones I’m hearing about don’t seem like a very good idea, since they give billions of dollars to billionaires.

I think the billionaires are already billionaires, and will just end up buying mortgage salad bonds, tech fantasies, tulip bulbs, video poker, I don’t know since I’m not a billionaire.

But you seem really focused on giving the billionaires and their businesses the billions, and I am sure you’ll do something with taxes that you and Trump will call the greatest gift to American liberty since God created S corps.

So after that, you’re going to impeach him, right?

If you’re still on the fence, please allow me to persuade you.

First, this assumes that Robert Mueller’s special counsel investigation finds that he broke the law, because come on.

Now, I know it’s a scary idea to impeach Trump. You and him have mostly the same voters, and they like him more than they like you because he’s exciting, and mean, and you’re pretty bland, and try not to seem as mean.

So you’ll probably lose to Randy Bryce if you do it, and you might anyway. If you think about it, you might end up less embarrassed by losing if you can say you lost because you impeached Trump, and get all puffed up about it on tv.

But that’s just one thing to consider. There are many other upsides for you post-Trump.

One is that Trump makes everything your party wants to do more challenging and less popular. Once Trump says he likes what you’re doing, a bunch more people automatically hate it. I don’t see that changing.

Another nice thing is that once you lose your election, you are free! You can do whatever you want! Go take a million a year to run a super PAC. You can collect big checks for going on tv for a few minutes.

You’re young anyway. You could probably run again and win after the Democratic base goes back into hibernation until the next Republican somehow tops the last one as the worst ever president in history.

Also, there is your legacy to consider.

As I have mentioned, Trump is very unpopular. Speaking for myself, I did not think I could despise any political figure more than I despised Dick Cheney. Trump tops Cheney for me, and Trump has more associates -- that I also hate worse than Cheney -- than I have fingers, toes, and gonads. By the numbers, I don’t think I’m alone. He makes millions of his countrymen feel violent urges in a way no president ever has.

Speaking of gonads, that’s where your legacy comes in. I know you exercise a lot so you can be, or at least appear to be, strong.

Well, impeaching Trump makes you look super strong. In the history books, you will be the strong man who stood up to Trump. If you don’t, you’ll be the weak man who rolled over for the guy only bad people liked.

The beltway press and Sunday show people, though, they will LOVE you. It will be so exciting for them.

I also mentioned that impeaching Trump is a good idea for everyone else besides you, but having followed your career I doubt you’ll find such arguments persuasive, so forget it.

In conclusion, I don’t want you to do your tax cuts, but I know you’re going to anyway. I only hope that after you do, you’ll be the big strong Paul Ryan I know you want us to think you are, and impeach Donald Trump.

Do it for the flattering press.

Do it for the half a day of grudging nice tweets.

Do it for your treasured image as a statesman.

Do it for the fuck you to Donald Trump, who obviously thinks you’re a twerp.

Yours in this hell you helped create,

Wonkette's loopy parodic missives to public figures and all other jesting fuckeries are solely funded by readers, can you even believe it? It's only because of you who have given, and you who will give in the future. Why not make that future TODAY?