Here Are 50,443 Inspiring Americans Who Won't Let Supreme Court Do Gay Stuff To Their Butts 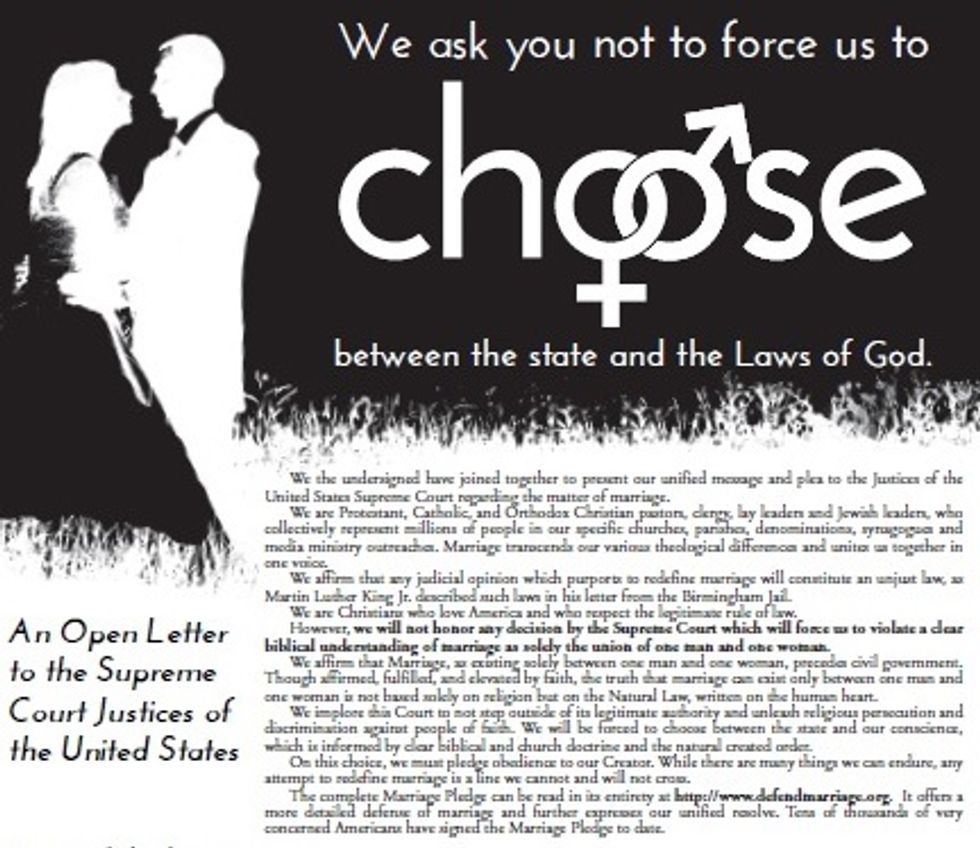 The time is nigh, when the Supreme Court of the United States of America will likely find that there is a constitutional right to marriage equality, though court watchers don't predict that they'll make gay marriage a requirement for all Americans. But you'd think they were about to do that, the way anti-gay Jesus Americans are panicking, by nervously, fearfully pulling out their nipple hairs and issuing proclamations that NO! you cannot force gay marriage right down their throats, they're gonna spit it out!

Pastor Rick Scarborough, who wants to sue the gays class action-style, is leading the "spit, don't swallow" brigade, with a WaPo ad begging the Court not to make them choose between Bigot Jesus and following the law, and a pledge declaring that, since God designed marriage (and redefined it like 8 times, because nobody gets 800 wives anymore like they did in Bible times, sadface), SCOTUS isn't allowed to rule on it, and they will NOT be forced into arranged gay marriages, no siree:

We will view any decision by the Supreme Court or any court the same way history views the Dred Scott and Buck v. Bell decisions. Our highest respect for the rule of law requires that we not respect an unjust law that directly conflicts with higher law. A decision purporting to redefine marriage flies in the face of the Constitution and is contrary to the natural created order. As people of faith we pledge obedience to our Creator when the State directly conflicts with higher law. We respectfully warn the Supreme Court not to cross this line.

As of this writing, 50,443 patriotic Americans have signed the pledge, led by some big name wingnuts, including the gay-hating-est presidential candidates of all, Mike Huckabee and Rick Santorum. Also, too, some of America's favorite anti-gay wingnuts, like Dr. James Dobson, Billy Graham's wayward spawn Franklin, those Aryan bigot twins with the canceled HGTV show, WONKET PEN PAL SEX MONSTER BRADLEE DEAN, and oh look, Jim Bob and Michelle Duggar. While we respect the Duggars' desire to protect Americans from throat-cramming, we think they oughta focus on their own family at the moment.

But these folks are drawing a line in the sand that says  they'll do a lot of things for the love of Jesus, but they won't do ... what? No funny butt stuff? Are they promising to continue stomping their feet and whining when they encounter a married gay couple? Because we already knew they were going to do that. Are they saying that no way, no how are they going to divorce their opposite-married wives and get engaged to Jim, the one they met on Grindr at the Southern Baptist Convention? We didn't expect them to do that, what they do with Jim is "a special secret."

Scarborough writes in a column for WND that "[t]here are tens of thousands of people of faith, in fact, hundreds of thousands, if not millions," who will not respect the Supreme Court ruling. Wow, their numbers grew from thousands to millions in the space of one sentence! But Scarborough immediately defines it right back down, saying that "thousands of Christians" will civil disobedience the law, by refusing to bake cakes and pizza for homosexuals, most likely. Such freedom fighters. And they'll refuse to let the state force pastors to do gay marriages, because that's a thing they believe is going to happen, even though it's clearly bullshit, in part because there is not a gay couple on the planet who wants to be married by a pastor who thinks they're going to hell for loving each other.