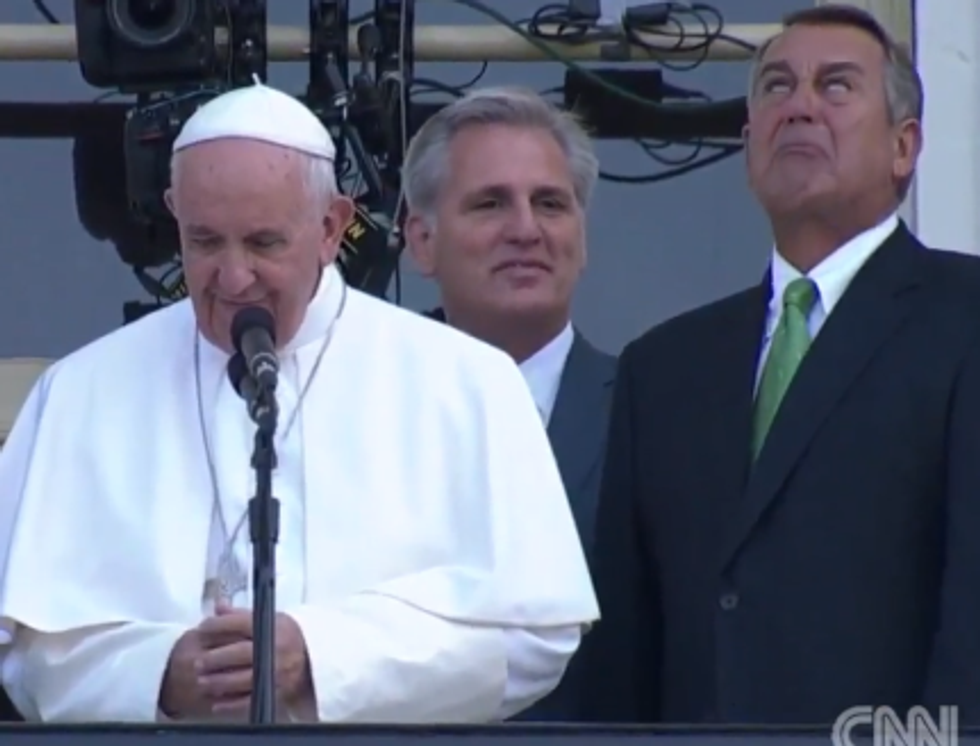 THANK YOU JESUS FOR LETTING THE POPE COME VISIT!

Everybody knows two things about John Boehner. For one, he cries SO MUCH. Like all the time, about any old fucking thing. Eyelash in his hoo-ha? TEARS. Something about Australia? BOO HOO! Nancy Pelosi said a mean to him? Gonna have to call in "FEELINGS" to work today!

The other thing is that he's an alcoholic, according to the top secret Clinton emails, and also according to would you just LOOK at him? Jesus.

So, did weepy alcoholic Catholic John Boehner cry all over the pope Thursday? Haha, is the pope Catholic? (Rhetorical question, wingnuts. We know you don't believe he is.) The Hill reports that the pope's visit took Boehner to his extra teary place for a reason, or maybe he was just drunk and The Hill is trying to be nice:

The Ohio Republican appeared nervous as he shook his arms back and forth while waiting for the pontiff to enter his ceremonial office off the House floor. He told people waiting in the room that the visit was a "big deal" for him.

"Your holiness, welcome, really glad that you're here," Boehner told Francis as he entered the room.

Boehner's eyes moistened as the pope told him he was glad to be there, too.

The Speaker told the pope his staff urged him to wear a green tie for the occasion. Francis, through an interpreter, told Boehner, "it's a tie with the color of hope."

"I need a lot of hope today," Boehner replied.

Yeah, don't care, let's get to the pictures. Here's John Boehner crying as he wonders if he remembered to buy Bailey's for his coffee.

Seriously, these are all just going to be screengrabs of the AMAZING cry faces Boehner made over the course of 18 seconds. Boehner nods to himself, remembering that yes, he did get the Bailey's. Praise Jesus!

This is where he jizz-crapped his pants a little bit (ALLEGEDLY):

Yep. It was a #2, and now he's embarrassed. BETTER CRY MORE.

Pope Nice-Nice said a good thing. I am going to get so drunk in a minute after I change Pull-Ups!

But first I have to clap for Pope Nice-Nice:

All right, all right, pull it together, Boehner! Gotta get through this.

For a bonus, here's a picture of John Boehner crying another time, about golf we think: