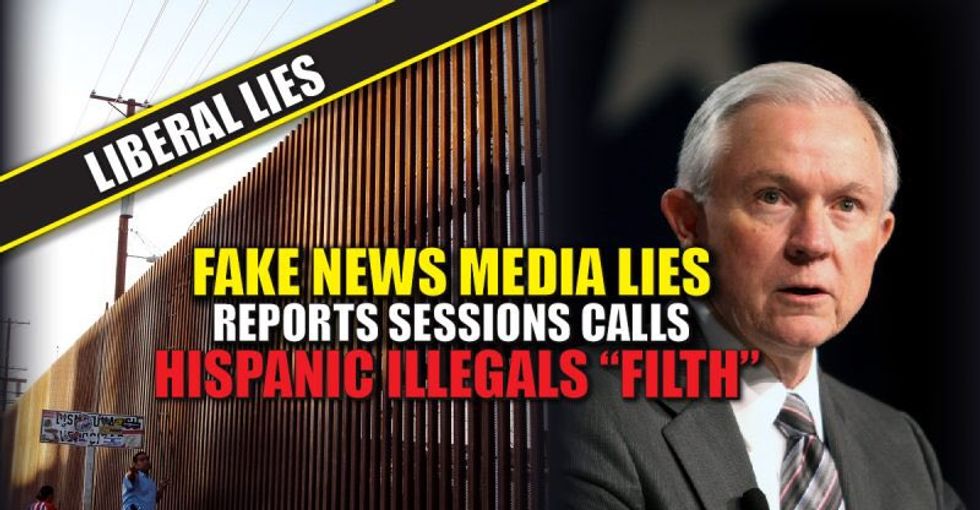 It's hard to keep up with our attorney general's asshattery, we know, but every now and again he says a thing so spectacularly stupid it's worth highlighting. Today's notation comes to you from a speech Attorney General Jeff Sessions gave in Nogales, Arizona, to Border Patrol agents. Normally I'd bother with a snappy intro but I'm not sure what anyone could add to the following, speaking about all the rapey Messicans he plans to incarcerate:

“We mean criminal organizations that turn cities and suburbs into warzones, that rape and kill innocent citizens,” Mr. Sessions said, according to the text of his prepared remarks. “It is here, on this sliver of land, where we first take our stand against this filth.”

One assumes Mr. Sessions is talking about drug cartels or something and not police in Florida. But we knew this dude was a racist and so let's talk about that last line, because holy shit!

From what yr Wonkette has been able to gather, the Trump Era is essentially a lawless dystopia in which we celebrate oligarchy as the only thing better than plutocracy, in which it is not only OK but preferable to traumatize and starve small children if they are brown and/or foreign, in which we will spend $100 million on bombs to nowhere (we call them Don Young Memorial Tomahawks) but can't find space in this whole big country for the people made homeless in Syria, in which we threaten journalists and offer world leaders subpar Applebees menus in our private clubs instead of doing Democracy, and in which for some reason our president is not accountable to anyone when it comes to whether or not he's compromised by foreign money because he won't give up control of his businesses so it's also an era in which we are paying for the president's adult children to travel overseas on what we are told but have no real reason to believe isn't the president's business.

Take a stand against filth by giving us enough money to help Drain The Swamp!