Here Is Jim Hoft's Apology From Your Wonkette 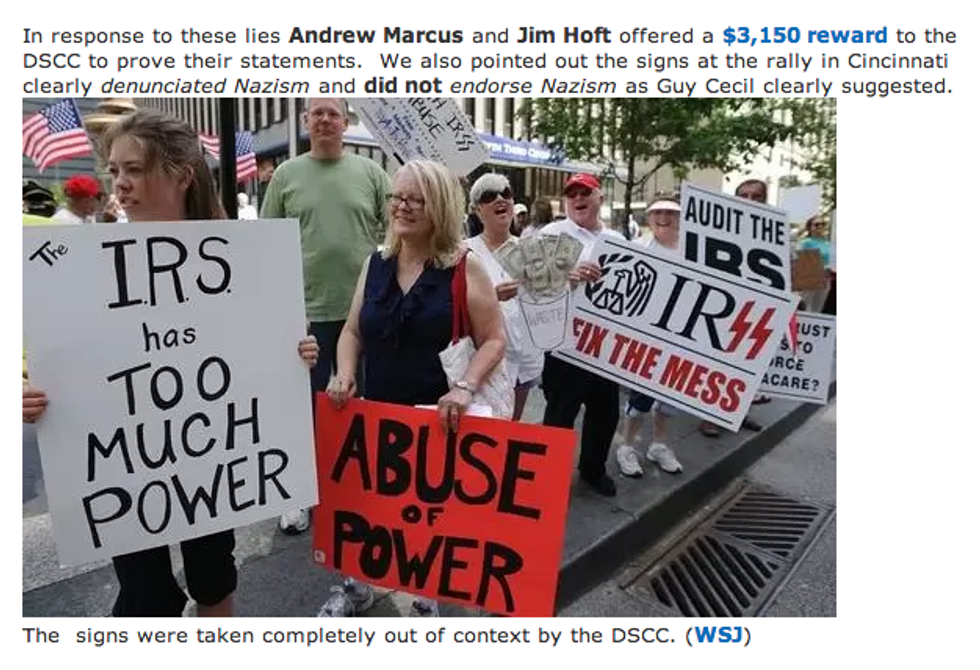 We saw your victorious post this morning asking Wonkette for a "correction," for being completely correct and pointing out that you are very stupid.

We are very, very sorry, that you are so stupid. We are sorry that reading is haaaaaaard for you. Have you considered Hooked on Phonics?

When some guy, Guy, sent out a DSCC fundraising letter, he said that Tea Party people "waved signs with Nazi symbols." You said -- in bold even! -- that Of course, this did not happen. Anywhere. You promised $3150 to the feminist group of Elizabeth Warren's choice if anyone could prove that it did. (Dear Senator Warren: we are a feminist group. Please have Hoft send the lovely munnies to us.)

It took Gary like three minutes of pretty hard Googling, but he's Ford tough! But then, after Gary sent you a link showing just that, you changed your challenge! In fact you "altered" it. You said someone had to actually find pictures of Tea Party folks "approvingly" carrying Nazi symbols, "endorsing" Nazism, like, we dunno, the English Defence League or something, because you said that's what that guy, Guy, was clearly suggesting, even though that is not what he said. Also, you said the Teabaggers clearly "denunciated" it.

So you posted your triumphant update that that guy, Guy, sent a new email in which he expanded his wording to "using Nazi symbols to attack opponents." You said he "altered" his fundraising letter -- which he didn't! He sent out a new fundraising letter which added three words. You altered your challenge -- after it was met -- and then said he altered his letter!

I mean, that is crazy, right?

You called on us to correct ourselves, for being wrong somehow? Which we most certainly were not, what are you even talking about? Because you were wrong? Because you are functionally illiterate and claim things never happened, when they did, because they did not happen in the imaginary way you claim someone else claimed they did, when those people did not?

And though you "altered" your challenge after your challenge had already been met and never admitted it, you claimed other people altered their shit? Because you could see into the brain of the guy, Guy, and know what he was "suggesting"? Instead of the words he actually said, which you said Of course, this did not happen. Anywhere? And then we sent you a photo?

Seriously, pay the fuck up.

Be a man, shitbrain. WE WANT YOUR FUCKING MONEY.