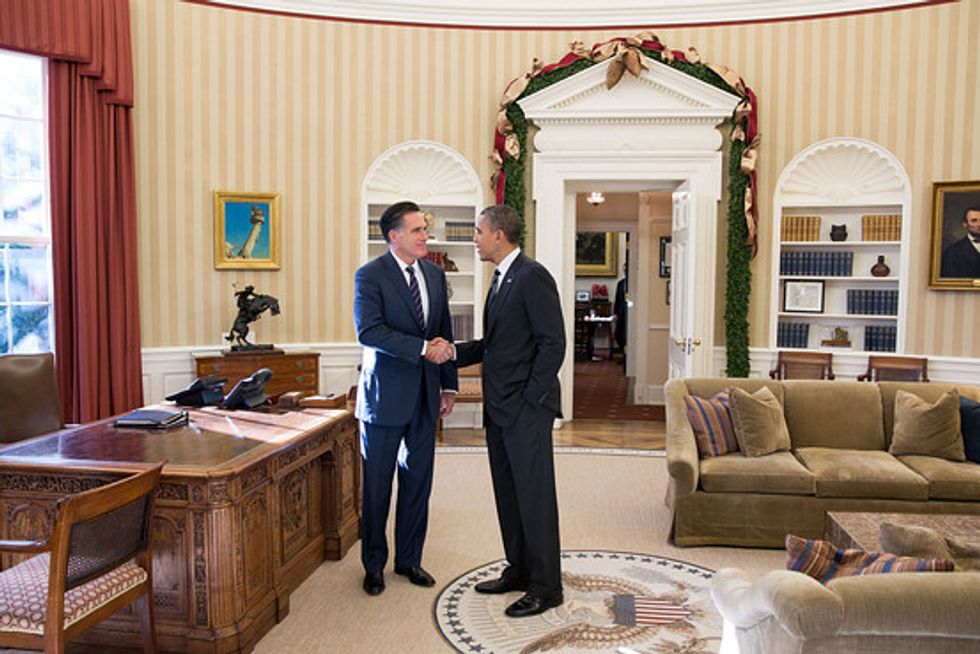 Do you guys remember the election, or has it receded into the mists of time for you? Do you remember Mitt Romney? No? You might not recognize him from the picture above. He's far less orange and OH MY GOD HE HAS NO FLAG PIN ON. He must be completely bereft. Perhaps we need to use our recently-acquired ThoughtPrint Decoding to learn what is going on in this picture. Yes, merely by gazing upon it, we can divine the innermost workings of Mitt. Just as Obama can't stop revealing that he stole the election, Mitt can't help projecting his muscular confidence fantasy that he won the election. (Imagine a hazy sort of screen wipe effect here, dear readers, to take you into fantasyland):

When America encountered dashing entrepeneur Mitt Romney, we encountered a man who was beautiful, brilliant, and intimidating. America was startled to realize how much they wanted Mitt Romney, and, despite his weird cyborg-like exterior, America was desperate to get close to him. Mitt Romney admitted he wanted America too - but on his own terms.

Shocked yet thrilled by Mitt Romney's singular economic policies, America hesitated. For all the trappings of success - his multinational businesses, his vast wealth, his loving family, his surprisingly life-like behavior - Mitt Romney is a man tormented by demons and the need to screw over the poors. When the couple embarks on a daring election affair, America discovers Mitt Romney's secrets and explores America's own dark desire to join Mitt Romney forever in utterly eviscerating the social safety net.

Wasn't that bracing? Arousing? We thought so too, but then we ended up looking at the HORRIBLE couches in that photo. God, those things are boner-killers. They are presidential and special and chosen by your messiah Obama though:

Mr. Bush’s yellow brocade couches have been replaced with two custom-made sofas of brown cotton that resembles velvet. They face a boxy table, fashioned from American walnut and mica, that features a fruit bowl – not flowers – as its centerpiece. There is a lone navy blue pillow on one of the couches, which pulls in the blue from some new, modern table lamps.

Cotton couches and a fruit bowl. The Obamas are your grandparents, minus the plastic covers on the couch. But at least they look better than the Bush-era couches of yellow brocade:

Yr Wonkette is not entirely certain what brocade is, actually, but Yr Wonkette wants never to go to the Laura Bush tea party for damn sure.