Here It Is, The Most Florida Headline To Ever Florida: Your Florida Roundup 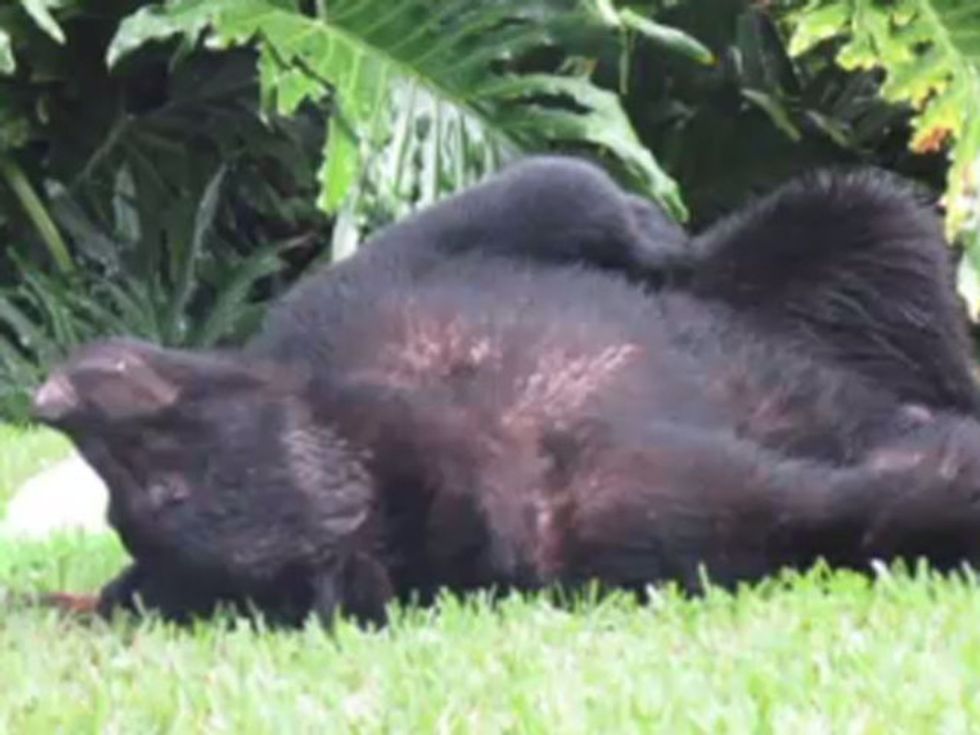 We will begin this week’s roundup with a headline that is too perfect, too resplendent, too quintessentially Floridian, for words:

Gunshot victim dropped off at Walmart instead of hospital

But because Yr Wonkette pays Yr Florida Correspondent to do words, let us break this thing down nice and slow.

Police say a shooting victim was apparently taken by a friend to a South Florida Wal-Mart instead of a hospital and left outside the store.

So, OK, a friend was with him during — or at least shortly after — the shooting, which we’re going to guess was the kind of accident that happens when Florida idiots play with guns and the guns go off and a Florida idiot claims a Darwin Award, but maybe not, who knows. But we don’t know where that shooting took place or under what circumstances, though the cops say it wasn’t in the Walmart or its parking lot.

Which means that this “friend,” a very bright human being no doubt, was like, “Holy shit, man, you’ve been shot, we need to get help!” And then followed that up with, “I know, I will take you to the Walmart!”

The store remained open during the investigation.No further details were immediately available.

There it is, guys. We have reached Peak Florida.

Did You Know We Have Lots of Rednecks, and They Are Stupid?

Earlier this week, as the good Dok explained, a Florida gun shop owner who apparently jerks off to the Confederate treason flag every morning before breakfast decided that, after the most recent senseless mass shooting, enough was enough, no more guns … for Muslims, that is.

The Dylann Roofs and John Russell Housers of this world, both, like him, Confederate flag fans, would presumably still be very much welcome at this gun shop, because good white Christians never do any mass killings, don’t be silly.

Hallinan is also stepping up security at his store in fear of backlash.

"The jihadists said they'd do it and they have. They said they live among us and they do. We must be prepared, vigilant and equipped to handle any situation that might come our way," said Hallinan.

Of course, as is turns out, blatantly discriminating against a class of people based on their religion is, well, how to say this, ILLEGAL AS FUCK. (Unless religious freedom only applies to Hobby Lobby ordering you not to take slut pills, sluts.) And so the Department of Justice is reportedly considering an investigation, which naturally prompted thoughtful headlines from all of your favorite right-wing news sites, usually like this:

In other Florida redneck news, let us away to Duval County, home of the Dumbest Big City in America, Jacksonville, where Yr Florida Correspondent once had the misfortune of living. And what are those good, Jesus-loving dummies up to this week? Why, book-burnin’, of course.

Several residents of Duval County, Florida, are protesting the inclusion of two children's books set in Afghanistan and Iraq in the third-grade curriculum of the county's public schools, the Florida Times-Union reports. They argue that "The Librarian of Basra" and "Nasreen's Secret School" contain subject matter too heavy for children, and promote "prayer to someone other than God."

That Someone Who Is Not God is, yes, Allah, who actually is God to about one-fifth of the world’s population, but never mind that. What’s important here is that children are being exposed to other cultures, and that is a bad thing.

About nine parents have submitted petitions challenging the books, according to Duval County Public Schools Superintendent Nikolai Vitti. Duval County, which includes Jacksonville, is the seventh-largest county in Florida. … Dianne Haines Roberts, a resident whose grandchildren attend a Duval County public school, says the content of the books is too adult for 8-year-old students. "We’re talking about third-graders and they’re very impressionable," she said. "I don’t think they need to know the horrors of the world."

Roberts was one of several residents who shared a Facebook post opposing the books, which appears to have led to the petitions. The post, which she says she didn't write, reads in part: "If we cannot promote praying to God and Jesus Christ in our public schools, how can we promote reading the Koran and praying to Muhammad?"

This would be a more persuasive argument were these Muslim prayer books, but they are not. Instead, they are children’s books set in Muslim cultures that only reference the religion as background noise. Want to learn more about these lovely books, which are lovely, that these idiots are trying to ban? Well, you're in luck, because our Dok did a full review of them!

Oh, and this is the same Duval County school system that to this day doesn’t let its students read Angels in America, because gay.

But We Will Do Anything for Our Animals

OK. How would you respond … in Florida?

One Florida man decided that the best tool to reprimand an 18-year-old who disciplined his dog was a machete.

WKMG reported that Robert Kronz grew upset when his stepgrandson disciplined his Chihuahua after it defecated in the house. In response, Kronz grabbed a machete and began to swing it at the teenager.

For some weird reason, that is a crime.

In other Florida-people-doing-extreme-things-on-behalf-of-their-dogs news, we bring you a too-rare-for-the-Roundup Nice Time:

Florida woman jumps into pond, fights gator as it tries to kill her dog

Lori Beiswenger would do anything for her dog – even fight off a 7 1/2-foot alligator.

According to WFTS, Beiswenger, owner of Point O'Woods golf course in Inverness, was outside gardening with her 9-year-old terrier mix, Hope, on July 11, when she heard a scream. She turned and saw a gator pull the dog into a nearby pond.

"I was screaming her name, 'Hope, no!'" she told WFTS. "Then I started screaming, 'Somebody help!'"

Desperate to save her furry friend, Beiswenger jumped into the pond and started pulling the gator's tail. After the third tug prompted the gator to look her way, she got out of the pond.

A huge black bear in Seminole County had quite the weekend when a homeowner found it fast asleep in his backyard.

"(He) said there was big bear in her backyard," said Cross.

When Cross rounded the corner, he knew he was going to leave this one alone. "That's a big bear. That's a huge bear," he said.

As Cross got closer, he snapped a few photos of bear and its dinner, a 50-pound bag of dog food that it dragged from a garage nearby to under the shade of a tree.

Here’s some video of this adorable thing:

Officials say the lightning hit the beach at about 4:15 p.m., knocking two men in the water unconscious and sending a third on the shore into cardiac arrest.

An elderly Florida man was shot in the buttock with his own gun this week after confronting an intoxicated man who was disrupting sea turtle nests, the New York Daily News reports.

According to witnesses, the suspect later identified by police as 38-year-old Michael McAuliffe began harassing a group of volunteers watching over hatching sea turtles on Friday, saying, “I’m going to get you, you fucking sea turtle people” and “I’m going to beat the fuck out of you.”

“I figured if I showed a handgun that would be enough to diffuse any situation,” one of the volunteers, 73-year-old Stan Pannaman, told the Daily News.

But it was not. And then this happened:

Pannaman said he saw McAuliffe take a swing at Young, 64. "Then he started coming at me," said Pannaman, a retired salesman from Manhattan who is classified as fully disabled and walks with a cane. "That's when I pulled a handgun from the pocket of my shorts."

Pannaman said he did not point the gun — a .32 caliber Kel-Tec pistol — directly at his assailant, but turned so the man could see it. "He stopped," said Pannaman. "I thought I had defused the situation."

But seconds after Pannaman put the gun back in his pocket, McAuliffe "lunged at me, grabbed me and threw me down onto the sand," he said.

As they wrestled, McAuliffe hit him in the face and gouged his head, Pannaman said. "I saw stars for a few minutes," he said.

When McAuliffe got hold of the pistol, he stood up, Pannaman said, and declared, "I'm going to shoot you with your flare gun."

Thinking McAuliffe was about to pull the trigger, Pannaman said he "spun to get out of the way," and a bullet hit him in the left hip.

And last but certainly not least:

Man gets head stuck in workout machine, is rescued by firefighters

Fort Lauderdale firefighters rescued a man after he got his head stuck in a hotel’s exercise machine Wednesday, the Orlando Sentinel reports.

The guest got stuck at around 11:30 a.m. at the W Hotel at 401 North Lauderdale Beach Blvd., when he reportedly tried to work out his shoulders on a piece of equipment.

“He fell off the machine and he got caught up in the weight machine,” said Capt. Greg May of Fort Lauderdale Fire Rescue.

According to May, the Fort Lauderdale Fire Rescue’s Technical Rescue Team got torches and saws to help free the man, but before they started another crew member “manipulated the man’s head out of the machine using a bar,” he told the Orlando Sentinel.

Well, that’s all for this week, Florida. Maybe this column should retire, because how are we going to top this?