Here's A New One: Idaho CPA Secretly Wrote White-Supremacist Books, Talked To Hitler In His Head 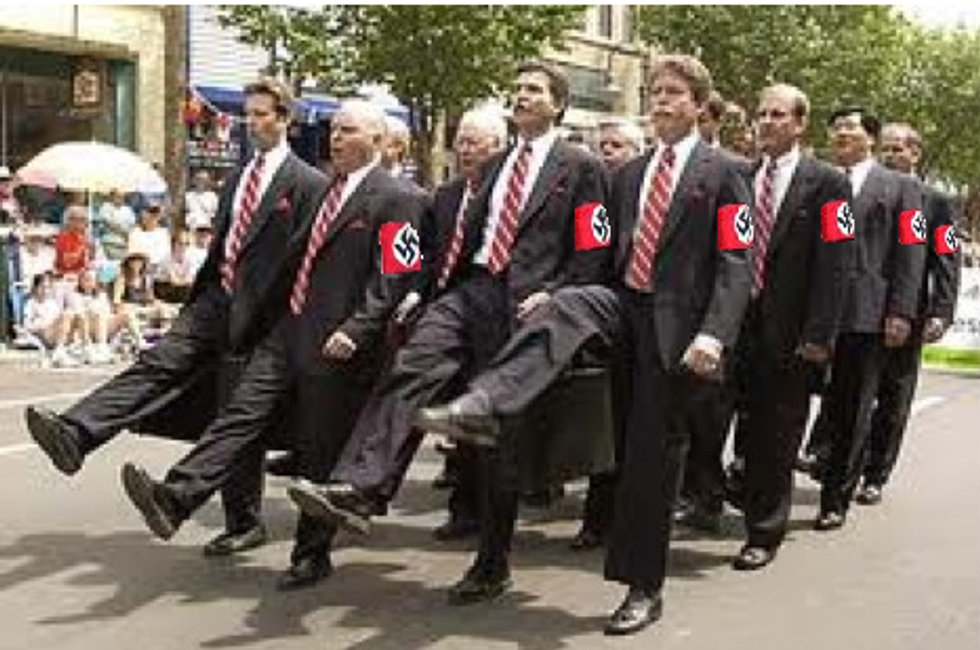 Well, here's a change. We've written aboutCarl Hiaasen characters come to life in Washington, so how about a Kurt Vonnegut character in Idaho? Sadly, it is not Montana Wildhack or Kilgore Trout or even Eliot Rosewater. No, Idaho gets stuck with an accountant who wants us to think he's Howard W. Campbell, the protagonist of Mother Night -- you know, the decent patriotic guy who pretends to become a Nazi, for good reasons, only nobody remembers he's undercover, so he eventually gets tried for war crimes? That's pretty much what Timothy Stephen Folke, an accountant from Payette, Idaho, insisted he was up to. In the Southern Poverty Law Center's summer Intelligence Report, Heidi Beirich details the white-supremacist screeds written by Folke under the pseudonym “Farnham O’Reilly,” and notes that "in a bizarre series of E-mails," the accountant explained to her that he didn't really mean it when he was cranking out racist fantasies and manifestoes -- it was all just part of a "project" to find out more about actual racists, of which he was definitely not one, of course. He just liked their interest in nature. Sounds plausible! Maybe Folke would have done well to read Mother Night instead, what with the advice about how we become what we pretend to be, so be careful about that?

Oh, yeah, and Folke also wrote that he heard the voice of Adolf Hitler talking to him inside his head. That bit wasn't in Vonnegut, though, because who would believe something like that?

If Folke was faking it, he was certainly a prolific faker. Starting in 2007, he published dozens of articles, tracts, and at least one "racist fantasy novel," most of it associated with the National Alliance, the neo-Nazi group founded by William Pierce (who also wrote The Turner Diaries, the novel that inspired Timothy McVeigh). Beirich gives us a taste of "Farnham O'Reilly's" literary style, from “What Will Work,” a 20-part series about creating white homelands in the USA -- right under the big hooked nose of the Zionist Occupation government!

The series is infused with racism and anti-Semitism. In it, he writes that “Colored” people are “Mother Earth’s own proverbial ring around the collar” and then goes on to discuss Jews. “The Jew has found the chink in our armor -- our enthrallment with visual imagery,” he writes at one strange point. “How the Aryan delights in private visual imagery -- entertainment, sensationalism, drama, and pornography! And the Jew is there to offer it, 24/7, for he knows that visual imagery delivered via mass media — be it TV, movies, videos or internet -- is his key to world dominion through brain-hacking the only people that pose a real threat to him.”

Poor Aryans! Their admirable devotion to the life of the mind is so easily turned against them by scheming manipulative Jew types who seduce them with pretty pictures! And let's not even get started on the throbbing jungle rhythms of the jazz and the rock and the roll!

And then there's Folke's racist answer to The Chronicles of Narnia, a 2011 book-shaped object titled Hyperborean Home

The story is set three millennia in the future and, perhaps unsurprisingly given Folke’s profession, has a long section on accounting practices. (One befuddled racist reviewer remarked: “It does seem odd that the author wanted to teach about race and the New Order and he uses a lesson in accounting to do it.”) The novel features a race called “The Fairest Ones,” beautiful light-skinned people who have their own homeland and live long lives as the result of natural selection and eugenics, or the selective breeding of humans. They are stalked by “Evil Ones” who seem to basically be what modern racists call “multiculturalists,” or supporters of multiracial societies. The book says it “indicts the current system and gives hope for a better world to come.”

Yeah, but the accounting stuff is a necessary part of the novel, man. You know, like all the lessons on whaling in Moby-Dick. Besides, one of the two reviews on Amazon praised its "understanding of the J Problem/Question" -- Secret Code! Isn't that cute! Of course, the other reader found it "boring." We will guess that this is because Folke, an Aryan, simply lacks the natural entertainment-n-manipulation chops of Jews or negroes.

Would you like an excerpt from Hyperborean Home? We bet you will hate it, so how about this description of Adolf Hitler, which is in the present tense despite the novel's future setting (who knows, maybe cloning or something):

“His face, not unhandsome, suggested strength and manliness. He had large, pale blue eyes. His voice, probably as a result of injuries received in wartime, was harsh and raspy on occasion. His hair was a luxurious brown, greying only in his last year under the enormous pressures of the war. In his early years he sported a large, bushy mustache, later keeping it trimmed in the style so popular in his day and in that part of the world.”

That was not unhorrible! Also, speaking of Hitler, an autobiographical sketch at the end of the novel explains how Folke was visited by His Master-Race's Voice, describing how,

while walking his dog one day, he heard the voice of Hitler talking to him. Another time, Folke says Hitler spoke to him at 2 o’clock in the morning. He identifies this voice as a “spirit” that he has heard “repeatedly down through the years.”

We have to sympathize. This one time in high school, we had "I Am The Walrus" going through our head for weeks, but we didn't think to write a novel about it. Goo goo ga choob!

Beirich notes that Folke apparently did a good job of following much of his own advice in his "What Will Work" series, hiding his white nationalist views by never publishing them under his own name, and by covering his actions by claiming to be interested in "nature" and "animal rights"...which was what he told Beirich motivated him. What a twist!

In a sad note at the beginning of her piece in the SPLC Intelligence Report, Beirich adds that after she had completed the piece, Folke contacted her to let her know that he had “experienced the loss of my wife and family” and had “withdrawn from all activities dealing with the public, as well as all aspects of my previous profession and business.” He also seems to have gotten out of the CPA business and shut down both his firm's and his personal website. His son, Kurt (!) Folke, told Beirich,

that his father had only informed his family of his “deeply disturbing” secret life the previous weekend, and confirmed that his parents were divorcing and his father had “retired from the firm.” His father, he said, “is out of the picture and out of our family and our lives.” Kurt Folke added: “He needs to reflect on what he’s done. He’s going to retire and reflect on what he’s done.”

Oh yeah. We are what we pretend to be. How about that?

Remember, Pacific Northwest Wonkettonians, Yr Doktor Zoom will be attending the reader-organized Seattle Drinky Thing TOMORROW, which would be Saturday, June 1; details at this linky right here. Will there be lame door prizes? It is decidedly so!