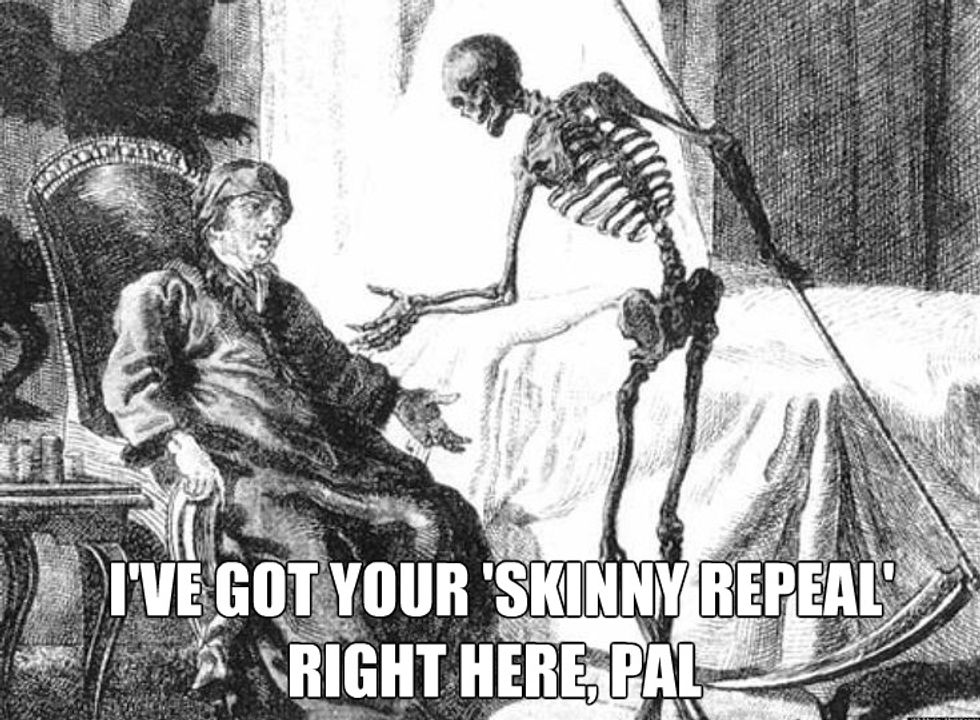 Either way, we get boned.

Now that the Republicans in the Senate appear to have given up on trying to come up with anything to replace the Affordable Care Act, their fallback plan -- if you can call thrashing around desperately at the last minute a "plan" -- appears to be what's been called a "skinny repeal" that would eliminate some provisions of Obamacare Republicans hate most, so maybe they can get 50 votes on that. While a "skinny repeal" may sound like it would be less severe than a full repeal, it's really just more Luntzian bafflegab aimed at making a shit sandwich sound more appetizing.

Senate Democrats requested a preliminary score from the Congressional Budget Office, and while there's no "skinny repeal" bill written yet, the provisions likely to be included would leave 16 million more Americans without health insurance, and would raise premiums in the individual markets by 20 percent across the board. Oh, and -- a small detail -- it would likely lead to a collapse of the individual markets, leaving many states with no insurers in the market at all. Say, weren't higher premiums and quite a few counties having no insurers the reasons we absolutely have to repeal the ACA?

Senate Parliamentarian Ruling Would Kill Off Trumpcare For Good, In Any World Where Pigs Don't Fly

Another roadblock to repealing the Affordable Care Act? Too bad Republicans stopped believing in roads long ago.

So here's the skinny on why the skinny sucks: Again, no bill, but it would definitely get rid of the individual mandate (everyone has to buy health insurance) and the employer mandate (employers with over 50 employees have to provide insurance). It would also eliminate the medical device tax. And maybe if Republicans close their eyes and wish real hard, it would defund Planned Parenthood, an idea the Senate parliamentarian has already said can't be passed without 60 votes.

Killing off the mandates, says the CBO, would cause 16 million people to leave the individual market by 2026 because hey, now they can just wait until they get sick to buy insurance. Without younger, healthier people paying into the risk pool, insurers would have to raise premiums by about 20 percent on everyone who stays in. And with fewer healthy people staying in the markets, but more sick people staying in as long as they can afford insurance, the individual marketplace would be set up for a "death spiral" as more people drop out and only the sickest stay in.

Ah, but Republicans are delighted by that 16 million number -- you see, if they drop their insurance because the mandates were the only thing keeping them in, then they have made a "choice" to go without insurance, and isn't choice a fine thing whenever it doesn't involve women and their ladyparts? The Atlantic shoots down that talking point:

CBO reports make clear that much of the coverage losses would come from people whose premiums would jump in such a market. The 20-percent number is an average, but it wouldn’t be applied equally across plans: As healthier, cheaper people leave and make exchange markets sicker, premiums will increase sharply for sicker people.

Also fun: Since the "skinny repeal" would not remove the federal subsidies for premiums, those higher premiums would result in higher costs for the government as well -- oh, hey, so much for saving money. That's probably a feature, not a bug, since the increased outlays for subsidies could then become an excuse to axe what remains of the ACA.

Now, it's also worth noting that the "skinny repeal" is probably not an end in itself -- it's less a plan for healthcare than a negotiation tactic meant to win 50 votes in the Senate and then move to a conference committee with the House, as Texas's John Cornyn, who truly is Number Two in the Senate, happily told reporters Wednesday:

To me, that seems to have a lot of benefits. Getting us to conference, where the House has passed a comprehensive bill. We could use the template that the House has, that addresses all of these issues, and come up with the best of the ideas that we’ve developed.

Translation: we can't agree on a plan, so let's pass this thing, go to the House, and if nothing else, we could glom onto their plan. Which, as you may recall, would lead to 23 million additional Americans losing healthcare and also slashes Medicaid. And if the Senate won't vote for that -- which seems quite possible -- then it's possible the House might adopt the Senate's "skinny repeal" and the thing that was meant to be a stepping stone would become the law of the land. Imagine that.

[Make] no mistake about it, skinny repeal is equal to full repeal. It's a Trojan horse designed to get the House and Senate into conference where the hard-right flank of the Republican Caucus, the Freedom Caucus, will demand full repeal or something very close to it.

Schumer also said Senate Dems would refuse to play along with the sham process the Republicans have been pursuing so far, saying Democrats would not offer any amendments until the Rs actually bring a real actual bill -- not a vapor of an idea -- to the Senate floor:

"Once the Majority Leader shows his hand, reveals what his bill will actually be, Democrats will use our opportunity to try to amend the bill," Schumer said. "But we have to see it first. And we ought to see it soon, in broad daylight, not at the 11th hour."

In the end, we're assuming we'll end up with a complete shitshow of a bill that makes health insurance far more expensive, leaves tens of millions without coverage, and leads to thousands of Americans dying from treatable illness. Donald Trump will embrace it and tell his supporters it's everything they dreamed of, and they will agree, going on Twitter to exclaim this merde en croute is the best thing they've ever tasted.

Yr Wonkette is supported by reader contributions. Click the "Donate" clicky to give us money, please. Did we mention we love you?