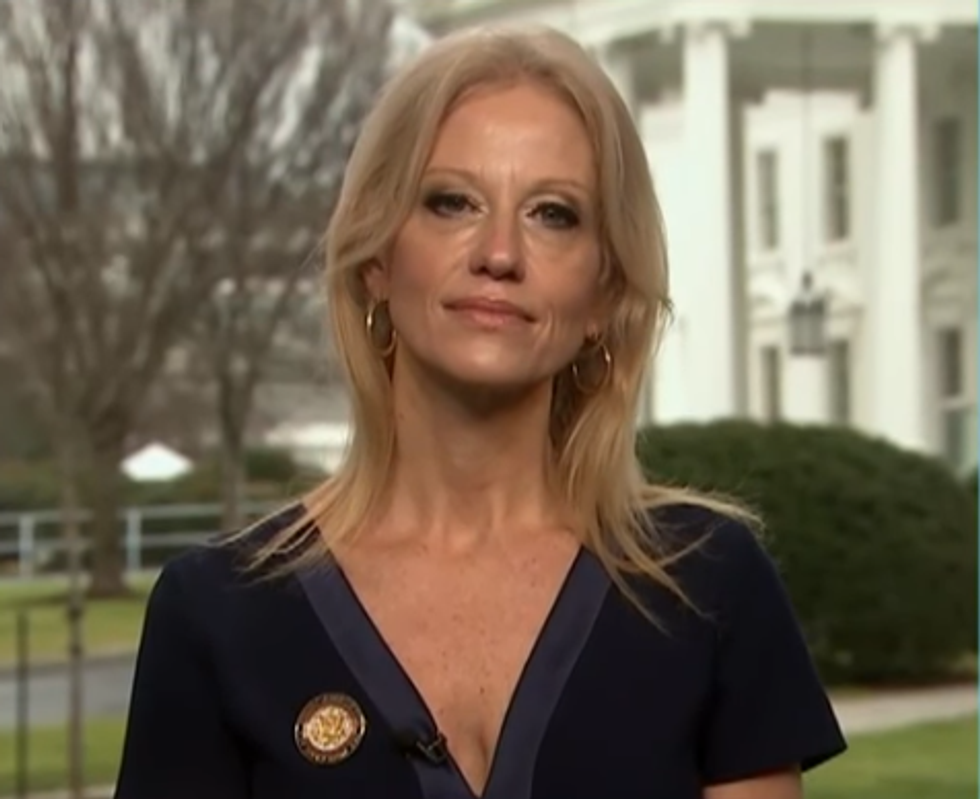 You might think Kellyanne Conway decided to take the rest of the week off after she moaned and wailed at Chris Matthews about #NeverForgetting the Bowling Green Massacre, which is a thing that happened, in Bowling Green. You only don't know about it because there was a media blackout that day, because the media HATES to cover bloody, violent things. But you underestimate the vast reserves of energy Kellyanne Conway has for being a stupid lying bullshitter who lies about stupid bullshit. Like, if Donald Trump had that much energy, he might be able to overcome his fears and hobble his rancid ass up the stairs to Kellyanne Conway's office, so she could spew some bullshit at him.

It is Friday, so quickly:

Kellyanne Conway Is So Excited About Giving Donald Trump Credit For January Jobs Report, When Barack Obama Was President

Sean Hannity took the Trump-shaped buttplug out of his mouth long enough to interview Kellyanne Conway, and oh the complaining she had to do!

"The coverage never changed, it never progressed, it never matured," Conway, who serves as counselor to the President, told radio host Sean Hannity.

Neither did the candidate or the "Kellyanne Conway."

"It never took on the aura of respect that it deserved, and if you are not showing the President and his main spokespeople respect, then you're not showing the office respect, and you are inciting mob mentality if not mob violence. You are encouraging people to go out there and unpeacefully protest and block airport entrances for people who are going to visit a sick parent and can't make their flight, or are going for a bereavement call and can't make their flight."

Wait, you mean like Iranians who can't get into America to visit their sick kids at St. Jude's Children's Research Hospital in Memphis? We think their inconvenience is really important too, because we're not gelatinous crap monsters like every single person who works for the Trump administration.

"If you surveyed these protesters, I guarantee you, you'd have a very low level of literacy when it comes to 'why are you here, what does that executive order do and what does it not do?'"

Pause for a moment to imagine a world where Trump supporters, with their misspelled signs and pork rind crumbs in their navels, are the "informed" ones, and the majority of Americans who are HORRIFIED by Trump's policies are the dumb ones. Haha, you can't, because it's UNPOSSIBLE.

"I was raised to respect the Office of the President and its current occupant no matter who it's been ..."

Maybe she should have thought of her upbringing before she sold her soul to help "elect" the single most unacceptable wanna-be tinpot dictator ever to run for the office.

Let's make a deal! We promise we will respect Trump's legitimacy exactly as much as Trump respected President Obama's legitimacy when he was in office. PINKY SWEAR SCOUT'S HONOR.

Kellyanne Conway Would Like To Talk About The Bowling Green Bloodbath S'More, Please

THE REAL LESSONS! Aside from whether it's good idea to make up massacres that didn't happen, we guess. But we'll attempt to answer her two questions:

Who will cover? Um, journalists in 2011, when that thing happened, the thing that actually wasn't a massacre in Bowling Green?

Who will care? The Obama administration, which learned lessons about the refugee screening process when those two Iraqi refugees were arrested in Bowling Green on federal terrorism charges, and initiated a process to make sure it didn't happen again. IN 2011.

Wow! Kellyanne Conway Is Dumb A Whole Lot Of Times A Day! Is That Why Her Fingernails Are So Gross?

We would be Fake News-ing you if we said conclusively yes, because that could very well be correlation without causation! But we think MAYBE when you are a depraved idiot liar like Kellyanne Conway, it might make you literally try to eat your own body:

Not pictured: ALL THE STIGMATA

Yuck. We'll see Kellyanne Conway next time, when she's being dumb again. Like Monday or something.