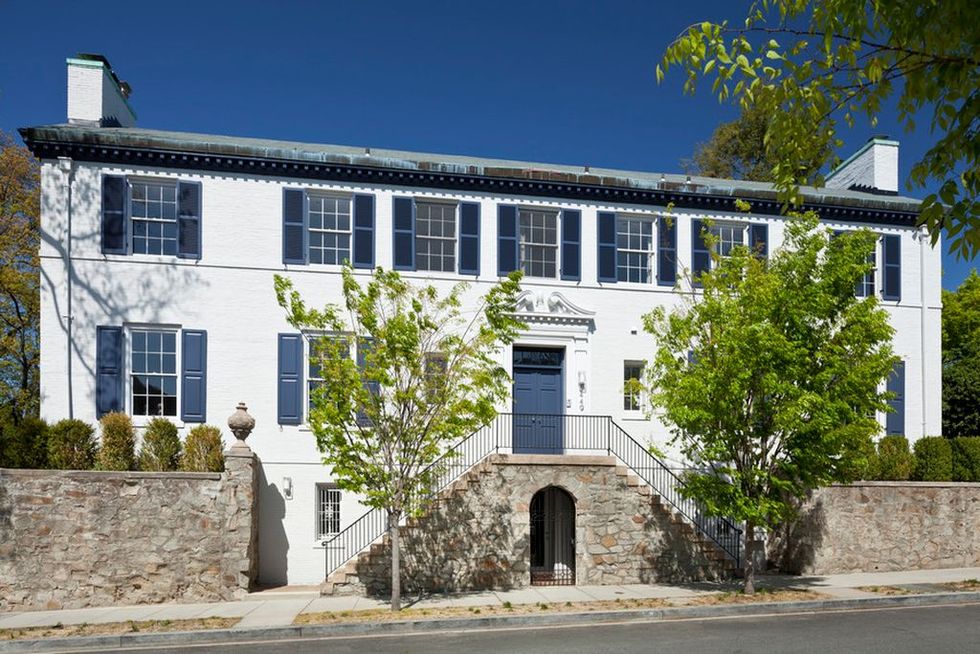 As you all know, Wonkette is much like the popular real estate website Zillow, and strives to provide you with all the best real estate gossip. So we are excited to tell you that Ivanka Trump and Jared Kushner-Trump are reportedly moving in to a lovely 6,666 square foot house (that's a lot of 666, Trump family!) in the Kalorama neighborhood in Washington, just down the street from the house where the Obamas will move in a few weeks when (gulp) Trump is inaugurated (vomit) president. (To be fair, Redfin puts it at 6,666 square feet. Zillow says 6,870. REDFIN IS BIAS PROBABLY.)

[wonkbar]<a href="http://wonkette.com/597558/sarah-palins-arizona-sex-pad-is-on-the-market-and-wonkette-wants-it"></a>[/wonkbar]Guys, we are being serious here when we say this is a beautiful home, and that OMG Ivanka and Jared have so much better taste than their daddy Donald. And to think just one year ago, we were writing about Sarah Palin's tacky manse in Arizona. This is way better than that.

As Washingtonian reports, the home was purchased for $5.5 million on December 22, but nobody knows for sure yet whether Ivanka 'n' Jared bought it, or somebody else bought it and is just going to let the happy couple rent it until Donald is impeached and sent to Gitmo.

Let's look at some inside pictures! As you will see, the home is historic-like on the front, but all modern on the inside! However, it is not business in the front and party in the back, as there does not appear to be a pool :(

After entering through a lovely, understated foyer, guests will be greeted in this living room, which Donald Trump will hate, because it's not gold-plated. What is this, a place for paupers????

Here is the kitchen where Ivanka 'n' Jared will make dinner for Daddy after he's had a hard day building Mexico walls, deporting American citizen Muslims, and just generally destroying the country. "Remember, his favorite food is Mr. Trump's Luxurious Peas," Ivanka will say. Jared will not remember how to make those, so Ivanka will remind him, "Just canned peas with sprinkles and whipped cream."

The dining room! As you can see, they will have to get a bigger table, but it has more than enough room for Ivanka, Jared, their children, Donald, Melania, Steve Bannon, Satan and Vladimir Putin to have big Russian feast before Donald relinquishes control of America to the Russian president.

Now, we have all been wondering where future First Lady Ivanka Trump will sleep in the White House, and we still don't have an answer. But when she decides to sleep with Jared, the guy she gay-married, she will sleep here, in this nice master bedroom, fit for the daughter of the thin-skinned man who will bring about the end of the world through a combination of incompetence, evil and an insatiable need for revenge. Needs better window treatments, OBV DUH:

Recently, we saw those nakey pictures of Jared at the beach and we were like, "Well hello there!" and "He might be pure evil, but we'd be DTF, because he is our type, EWWWW WE FEEL SO DIRTY NOW." Well, this is the master bath, and as you'll note, it has a nice see-through shower so we can all watch Jared do nakey showers, assuming we are invited to do so by Ivanka:

One of the other five (or six, depending on how you use the space on the bottom level, which appears to have a party room and an extra kitchen!) bedrooms. We don't know where Vladimir Putin will sleep when he's in town, but maybe he will stay with 'Vanka & Jay-Jay, because it would be bad form for him to sleep at the White House, or even at Blair House for God's sake, because come the fuck on.

And finally, here is a nice patio, for relaxing with wine and cigarettes and those little cocktail smokies, after a long hard day of making sure America is literally the most embarrassing country in the world:

Well, well, well, that's a right nice house, Ivanka! We hope the first couple enjoys every day they live there until Dad's aforementioned impeachment. Can we pencil that in for March, and then these people can go away forever? Yes, let's!